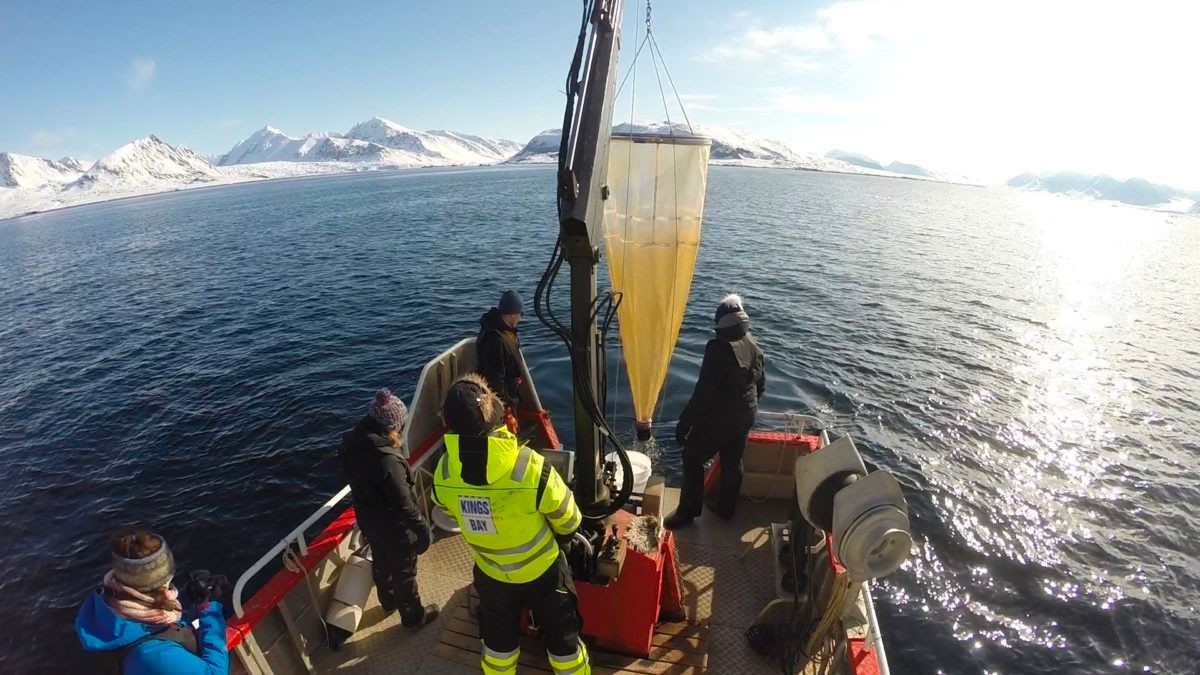 You may know that the carbon dioxide we humans release is changing the climate. Fewer are aware that it is also changing the chemistry of seawater. About a third of the CO2 we emit is taken up by the oceans, where it lowers the water’s pH. That has consequences for marine ecosystems.

In the ocean, zooplankton are a crucial link between energy-producing phytoplankton and fish. We have studied how changing acidity might affect zooplankton. Although recent research has revealed a complex web of interactions between plankton species, the notion of a linear food chain from phytoplankton via zooplankton to fish is still valid as a model for the transport of energy from primary producers to fish stocks in arctic waters. There, most fish larvae rely on zooplankton for food. This makes the arctic ecosystem particularly vulnerable to perturbations that affect zooplankton productivity. One focus of concern is how arctic zooplankton populations will evolve in the face of climate change and ocean acidification (OA).

Just as arctic ecosystems are vulnerable to perturbation, the waters of the Arctic are vulnerable to OA. Present OA rates are far higher here, and they are expected to remain so for three reasons. First, melting sea ice has low capacity to buffer acidity. Second, although the Arctic Ocean constitutes only 1% of the global ocean volume, it receives 11% of the discharge from rivers, which not only has low buffering capacity but also brings significant amounts of terrestrial carbon, which may ultimately be transformed to CO2 by microbial respiration. Finally, increasing inflow from the North Atlantic transports large amounts of anthropogenic CO2 to the Arctic Ocean. Arctic organisms are therefore the first to face the effects of OA and will face stronger OA in the future.

Unfortunately, arctic species may also be less well equipped to handle decreasing pH than most other marine invertebrates. Unlike lower-latitude species that tolerate a wide range of temperatures, true polar species perform best at low temperatures. But this advantage comes at a price. Polar marine invertebrates have less energy available for cellular pH regulation.

The ocean is in gas equilibrium with the atmosphere, so when atmospheric CO2 increases, more CO2 is taken up by oceans. There, it reacts with water to form carbonic acid. The most prominent effects of this reaction are a decrease in the seawater’s carbonate ion concentration, and a lowering of its pH (a phenomenon termed ocean acidification). The world’s oceans are estimated to have absorbed 155 billion tonnes of anthropogenic carbon between 1750 and 2010, roughly one third of the CO2 emitted by human activity over that period. This has lowered the global mean pH of the surface ocean from 8.13 in pre-industrial times to the present-day 8.05. The pH scale is logarithmic, so this corresponds to a 20% increase in acidity. Ocean models predict that this trend will continue; we expect a further decrease of 0.4 pH units by 2100.

Arctic zooplankton biomass is dominated by three copepod species: Calanus hyperboreus, C. glacialis, and C. finmarchicus. Much research has focused on these copepods, particularly C. glacialis, which is abundant in the shallow shelf seas surrounding the Arctic Ocean, and is the primary prey for fish larvae, birds, and baleen whales. In this as in many other species, OA effects seem to vary with developmental stage.

Somewhat unexpectedly, development of the early nauplius larval stages seems largely unaffected by OA. However, development rates appear to be maintained only through upregulation of cellular acid/base regulation, at the expense of vital physiological functions such as DNA repair.

In contrast, the later copepodite larval stages seem more sensitive. Studies show that OA will increase the cost of biosynthesis, which may result in poorer growth. One study showed that the growth potential may decrease by as much as 50% along the Svalbard west coast at OA levels predicted for the year 2100. Such changes will have serious implications for the C. glacialis population in these waters. They will prolong larval development time and reduce the body size of copepodites (preadult stages) and adult individuals.

The last copepodite stage seems unresponsive to increased pCO2, likely because these copepodites are metabolically different than the earlier stages. While somatic growth is the main goal of the earlier stages, the metabolism of the last preadult stage is reconfigured to accommodate winter dormancy (diapause), when extracellular pH can be as low as 5.5. Finally, the fecundity of adult C. glacialis seems unaffected by high pCO2 in terms of egg production, egg hatching success and timing.

Pteropods are another group of keystone species in the Arctic. While their biomass does not rival that of the Calanus species, they also contribute to the diet of many fish species. These mollusks build calcium carbonate shells, which are sensitive to corrosion when pH decreases. Studies have shown that shell integrity is compromised at OA levels predicted for year 2100 with increased mortality as a result.

But there are forces that may counteract the negative effects of OA. Studies show that OA effects vary among populations. Unlike their conspecifics along the Svalbard coast, C. glacialis from Disko Bay on the West Greenland coast seem entirely unaffected. This indicates the possibility of rescue from severe effects of OA. Evolutionary rescue from environmental changes can come about through advantageous mutations in affected populations, by immigration from more fit populations, or by fast adaptation. In invertebrates, mutations occur too seldom to save Svalbard’s copepods, but if copepods in other parts of the Arctic are as tolerant as the Disko Bay population, migration may act to counter OA effects. Also, our own previous studies have shown that copepods can adapt rapidly to OA (see Fram Forum 2014).

There is no doubt that the Arctic will change, and along the increase in temperature, one of the main changes is the decrease in pH. Although our knowledge on the effects of Arctic OA is increasing, we still know little about how these changes will affect the entire pelagic community, including fish stocks. During our work in the Fram Centre Ocean Acidification Flagship, we have focused particularly on effects on the keystone zooplankton species, the Calanus copepods. Ultimately, we hope our work will enable ecosystem models to project how future OA might affect the entire arctic ecosystem.