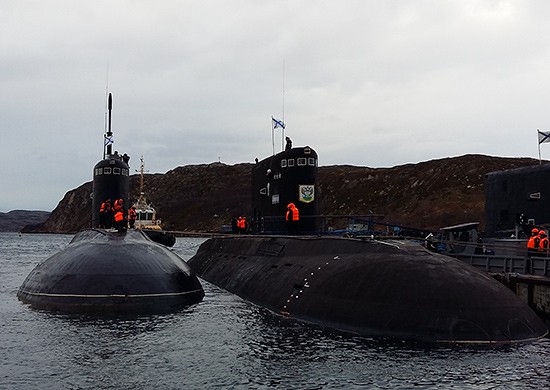 Russia´s Black Fleet is testing new submarines under Arctic conditions. Two vessels have already finished tests, and a third arrived in the north earlier this month.

The Varshavyanka-class (NATO reporting name Improved Kilo class) diesel-electric submarine “Stary Sokol” arrived in the Northern Fleet´s base Polyarny two weeks ago. It had sailed from St. Petersburg, where is was built, to the Kola Peninsula in two weeks, the Ministry of Defence´s web site reads.

The crew will be training at the base in Polyarny and in the Barents Sea for several months. The training will include deep-water tests, torpedo firing and firing of “Kalibr” cruise missiles.

Two other submarines of this class have already gone through Arctic training. “Novorossiysk” arrived in Polyarny in November 2014. Her crew spent some ten months training above the Arctic Cirlcle before sailing to a base in the Black Sea Fleet.

The second submarine of the class, “Rostov-na-Donu”, left the Northern Fleet on October 16 after finishing tests, but on the way to the Black Fleet she had to return to the Baltic Sea due to technical problems, VPK-news reports.

The Black Sea Fleet will get six submarines of the Varshavyanka class. The three first have already been delivered, while the fourth will be delivered in November 2015, and the fifth and sixth in November 2016, Vzglyad reports.

The Varshavyanka-class submarines are characterized by a combination of small size and low noise level with powerful torpedoes and missiles. They can fight underwater and surface targets and are designed to protect naval bases, coastline and shipping lanes. They have a 4000 tons displacement and can make 20 knots submerged. The submarine is armed with 533 mm torpedoes and Kalibr cruise missiles, which can destroy surface targets at a distance of up to 300 kilometers.