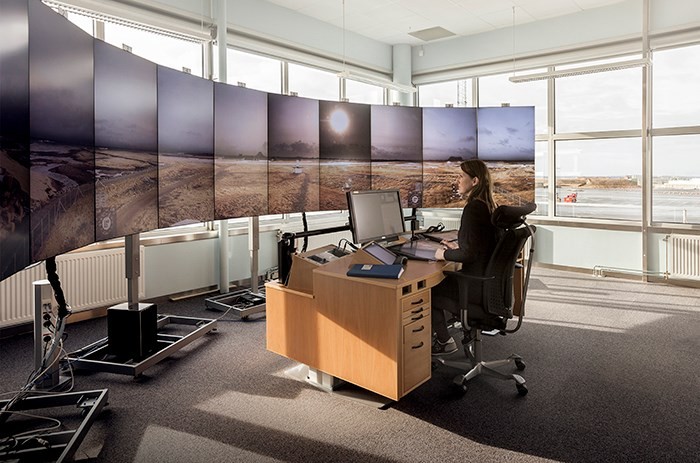 From the screens at the remote controlled tower centre, air traffic officers can serve airports hundred of kilometres away. Photo: Avinor

Are remotely controlled towers better than humans? Soon, five airports in northern Norway will be managed through cameras by people hundred of kilometres away.
Read in Russian | Читать по-русски
Text:

Northern Norway, and especially Finnmark is famous for nearly each little town having each own airport operating daily scheduled passenger flights. In Finnmark alone, there are 11 airports serving a population of just 73,000 inhabitants.

In addition to serving some few passenger flights per day, the remote airports along the coast of Finnmark also serve air ambulances, with unpredictable arrivals and departures. A remote controlled tower will be manned around the clock.

Avinor, the state own company operating most airports in Norway, is therefore looking to what happens at Örnsköldsvik airport in Sweden with great interest. Landings and take offs are operated from the Remote Tower Centre in Sundsvall.

People are replaced by a high-tech system of cameras, not only in the tower itself, but also spread around the airport to eliminate blind spots giving the controllers a safer and more detailed view in different kind of weather conditions.

For the smaller airports in northern Norway, remote controlled tower services can offer versatile opening hours with more flexible air traffic service. The first five airports to get the system is Hasvik, Berlevåg and Mehamn in Finnmark as well as Værøy and Røst in the Lofoten Islands.

The Remote Tower Centre will be in Bodø, northern Norway’s second largest airport.

Avinor says the system will enable one person to handle multiple airports simultaneously. It saves operating costs as well as as avoiding future investments in towers and equipment at each airport.

For safety, remote controlled towers provide staff with more information than they currently have in traditional towers. Avinor assures remote towers will only be introduced when it is well-documented that the solutions ensures safety levels equivalent to or better than the current solutions.

What will be next? Remote controlled security checks?