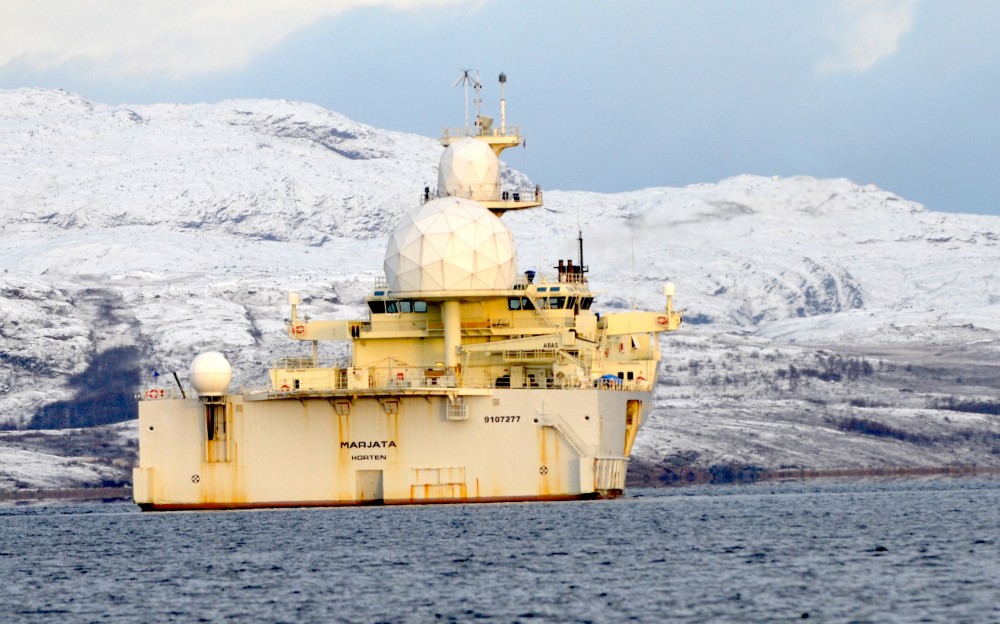 Norwegian military intelligence vessel "Marjata" in the fjord outside Kirkenes near the border to Russia in the north. Photo: Thomas Nilsen

Will Norway’s military intelligence vessel “Marjata” continue to sail in northern waters when the new “Marjata” is ready for her maiden voyage next year?

For the last 20 years, the current “Marjata” has been sailing the Barents Sea spying on Russia’s Northern fleet activities. Operating in international waters outside the Kola Peninsula, the intelligence vessel keeps an eye on Russia’s submarine activity in the High North.

Next year, the Norwegian Armed Forces’ intelligence service gets a brand new electronic survilance ship, also to be named “Marjata.”

Head of Communication for the military intelligence service, Kim Gulbrandsen confirms to the Independent Barents Observer that the question about the future for the current “Marjata” is still under consideration.

“For the time being it is unfortunately not much new to say about the old “Marjata”. It is still under consideration what the vessel will be used for,” Gulbrandsen says.

Gulbrandsen don’t want to speculate about the vessel being sold for breaking, re-built for other purposes or continue to sail the Barents Sea or other world oceans on military intelligence missions.

“Marjata” was commissioned in 1995 and has Kirkenes as homeport, although the vessels for most of the time is at sea. The vessel’s unusual hull is characteristic with the chimney in the front, a sharp bow ending in a straight cut-off stren. On top, several big radars clearly showing the vessels aim as survillance platform.

The new “Marjata” to enter service in 2016 has even more radars, according to the first photos made available. At least eight of what appares to be radars are visible on the top of that vessels. The first photo was posted the AldriMer.no, a Norwegian based newssite with special focus on security- and military news.

The new “Marjata” has a price-tag of NOK 1,5 billion (€160 millions), according to a press-release sent by the intelligence service last year.