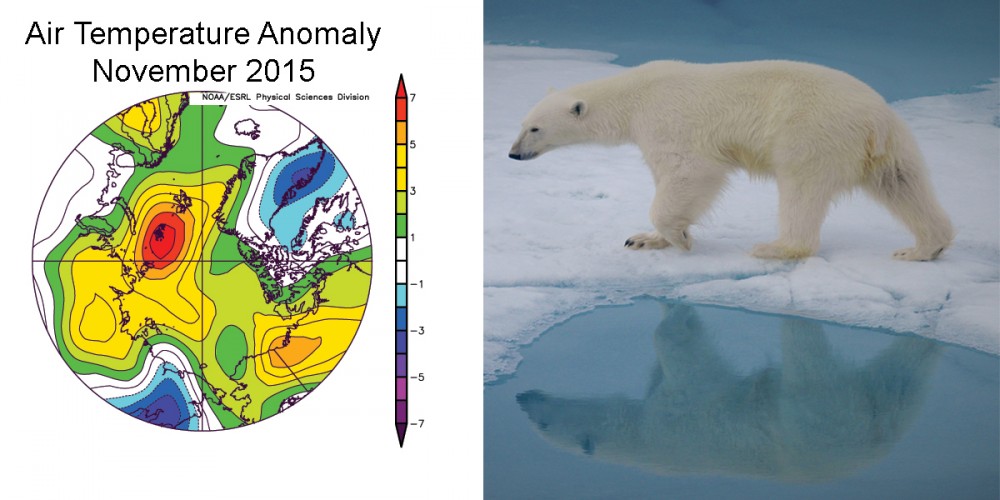 The ice is melting under the polar bear as temperatures are unusual warm (red color) from Svalbard to Taimyr. Photo: Thomas Nilsen

Core area for Norwegian-Russian polar bear habitat was 6 to 8 degrees Celsius above average in November.
By

Polar bears hunt seals from the sea ice and November should normally be freezing cold. Not so this year. Newly published data from National Snow and Ice Data centre show highly worrying measurements from north of Svalbard, across Franz Josef Land towards the Taimyr Peninsula.

Elsewhere in the circumpolar Arctic, temperatures were 1 to 4 degrees Celsius above average. No places on the planet have an higher increase in temperatures than the Arctic.

The November data were released simultaneously as world leaders gather in Paris for the UN Climate Change Conference.

Right now, there no other places in the Arctic Ocean where the extent of the sea ice is further away fro the average November extent than in the waters north and east of Svalbard. The entire northern part of the Barents Sea is still ice-free. The same goes for most parts of the Kara Sea.

Open waters are found even north east of Novaya Zemlya.

Polar bears are migrating between the Svalbard archipelago and Franz Josef Land. The joint Norwegian-Russian environmental commission agreed at a meeting yesterday in Moscow to continue exchange of information and counts on the polar bear population in the two countries Arctic regions, a press-release from Norway’s Ministry of Climate and Environment reads.