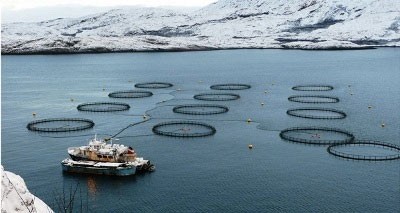 Little is left of the Murmansk aquaculture industry after this year's major outbreak of disease. Photo: Russian Salmon

Russia’s leading aquaculture company believes smolt from Norway is behind this year’s major outbreak of disease in Kola fjords.

The salmon farming industry in the Kola Peninsula is on its knees as disease this year resulted in mass fish deaths in fjords along Russia’s Barents Sea coast.

According to the Russian Fishery Agency, as much as 20,000 tons of fish have died in the Murmansk fish farms in the course of 2015.

The company Russian Aquaculture has alone lost about one billion rubles on the disaster, newspaper Vedomosti reports. The company, Russia’s biggest of its kind, is one of two fish breeders in the region. The second company, the Russian Salmon, in November declared itself bankrupt after major parts of its fish farms were ruined by disease and death.

The company operated large-scale farms in the Pechenga Bay, the fjord located close to the Norwegian border.

Representative of Russian Aquaculture, Ilya Bereznyuk, confirms to Vedomosti that his company suspects that smolt from neighboring Norway is the source of the destructive disease. The company is now considering to invest as much as four billion rubles in the development of its own smolt breeding facility, Bereznyuk says.

While Russian Aquaculture presents Norwegian suppliers of smolt as scapegoats in the Murmansk salmon scandal, information from other sources indicate that the reason for the disease is serious mismanagement of the Russian fish facilities. As reported by Bloger51, the aquaculture farmers might have kept more than twice as many fish as allowed for in their cage nets.

Following massive fish death in one of its net cages, the Russian Aquaculture company in spring this year reportedy decided to cut loose parts of the cage bottom in order to ease the weight pressure. That resulting in the escape of a major number of farm fish into the local fjord.

According to Vedomosti, the fjords so far used for fish farming by the two companies are today considered unhealthy and the Russian Aquaculture is therefore looking for new suitable waters.

Instead of the planned boost to 25,000 tons of breeded fish in 2015, the production of the regional fish farmers has reportedly this year shrunk to about 2500 tons.