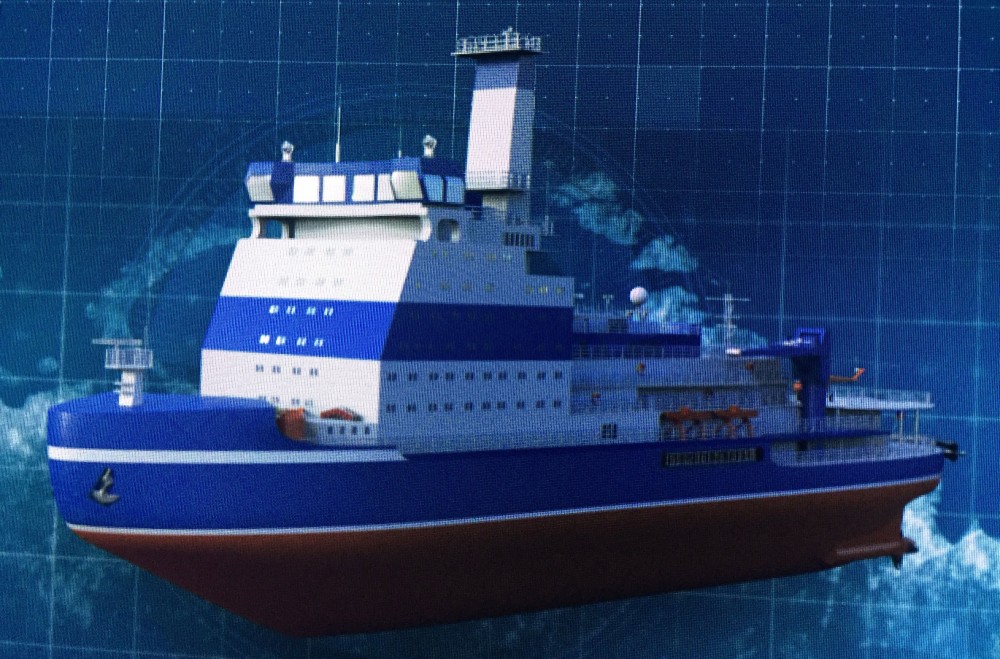 The LK-60 will be the world's most powerful icebreaker. Photo illustration: Atle Staalesen

The fleet of at least 14 new Russian icebreakers will significantly strengthen the country's presence in Arctic waters.
By

The reactor compartments are eight meter high and have a weight of 100 tons, company Atomenergomash, a subsidiary of state nuclear power company Rosatom, informs in a press release.

The LK-60 icebreakers will be 173 meters long and 34 meters wide. It will be based in Murmansk as part of the state-owned Rosatomflot fleet of nuclear icebreakers. Russia intends to build at least two vessels of the class, the first to be ready by the end of 2019, the second by the end of 2020.

However, the LK-60 is far from the only Russian icebreaker currently under construction.

Russia is also constructing the world’s most powerful diesel-engined icebreaker. The LK-25 (project 22600) will be 146,8 meters long and a crew of 38. It will be able to operate autonomously for 60 days in up to two meters thick ice. The first vessel of the kind named “Viktor Chernomyrdin” is built for the Russian state company Rosmorport.

In addition comes icebreakers built for the Ministry of Defence. A total of four icebreakers of the project 21180 are under construction at the Admiralty Yard in St.Petersburg. The first vessel of the kind, the diesel-engined “Ilya Muromets”, is planned to be ready in year 2017.

Also the Russian oil industry is building icebreakers. In April this year, Rosatom signed a contract with the Vyborg Yard on the construction of a 10 MW icebreaker which is to operate in and around the Sabetta port in Yamal. The ship is built for gas company Novatek and planned applied in the Yamal LNG project, Rosatom informs.

Also oil company Gazprom Neft is in need of icebreakers. As previously reported, the company has ordered a 22 MW icebreakers from the Vyborg Yard. When handed over to Gazprom Neft in 2018, the ”Aleksandr Sannikov” will break ice in the shallow waters of the Ob Bay, opening the way for tankers shipping to and from Novy Port, the company’s infrastructure hub at Cape Kamenny in the Ob Bay. The vessel is designed by the Finnish Aker Arctic Technology.

Another three diesel-engined vessels of the project 21900 are under construction at the Vyborg Yard. One of them, the “Vladivostok”, is to be ready for handover to owner Rosmorport in the course of spring 2015, while another two, the “Murmansk” and the “Novorossiisk” are to be completed in the course of the year.

Two other ships of the kind have already been constructed at the Baltic Yard in 2008 and 2009 respectively. The project 21900 project is developed for large-scale oil tanker assistance, as well as towing, transportation and rescue missions in icy waters.

The construction of Russia’s new icebreaking vessels is all concentrated on yards located in and around St Petersburg. While the Baltiisky Yard is constructing the new generation nuclear-powered icebreakers, the Admiralty Yard and the Vyborg Yard produce diesel-engined vessels. Also the Russian-owned Arctech Yard in neighboring Finland is involved in the construction of icebreaking vessels for Russian customers.