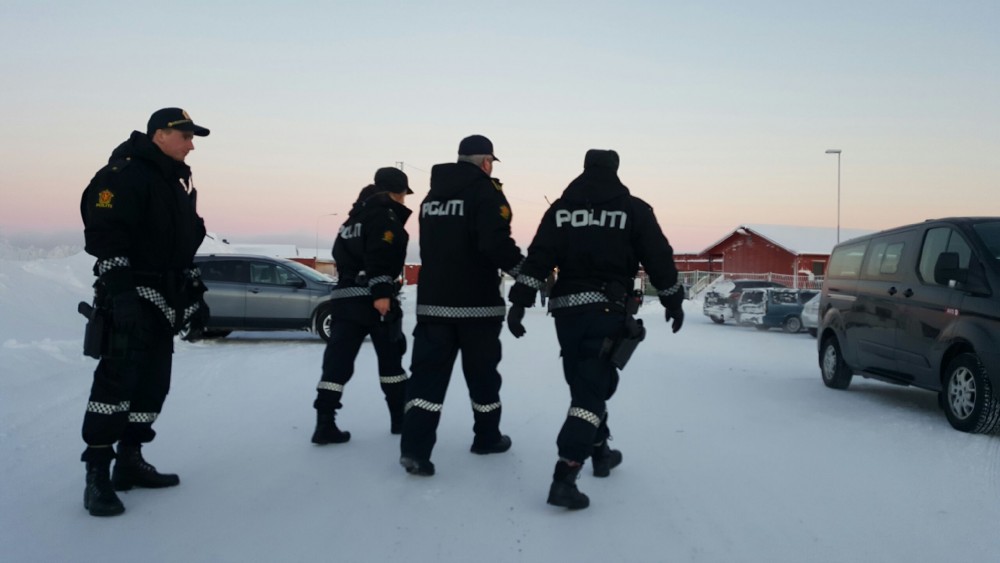 The Police is now guarding the entrance gate to the Reception Centre. Photo: Thomas Nilsen

KIRKENES: Terrified refugees with children try to make it to safe haven in local church ahead of ejection to Russia. Police detains two local Norwegians for assisting the migrants.
By

The situation is escalating at the migrant reception center in Kirkenes, Arctic Norway, as police is preparing deportation of more people back to Russia.

Ahead of a planned bus transportation to the border this morning, a group of refugees managed to escape from the center. They sought refuge in the local Kirkenes church.

Head of the church congregation Wenche Dervola confirms to the Independent Barents Observer that three people have made it to the church and requested church asylum. A priest is in the building to assist the refugees. The local congregation council will have an extraordinary meeting tonight, Dervola says.

Meanwhile, uniformed policemen are guarding the area around the church building.

Temperatures in Kirkenes are below minus 25.

Reportedly, another five individuals were detained by police some few kilometres outside Kirkenes when the police stopped the car. They were also on their way from the refugee centre to the church.

Also two representatives of the local support group named Refugees Welcome to the Arctic were detained by the police just before 11 am today outside the entrance to the refugee centre. Police officials at site say the two had plans to bring more asylum seekers from the camp to the church. The two detained were taken to the police station in Kirkenes.

This morning, 30 of the asylum seekers that are at the Reception Centre were told to prepare for departure, NRK Finnmark reported. Yesterday, the Chief of the Immigration Police Service, Tor Espen Haga told the Independent Barents Observer that all people at the centre outside Kirkenes will be returned to Russia.