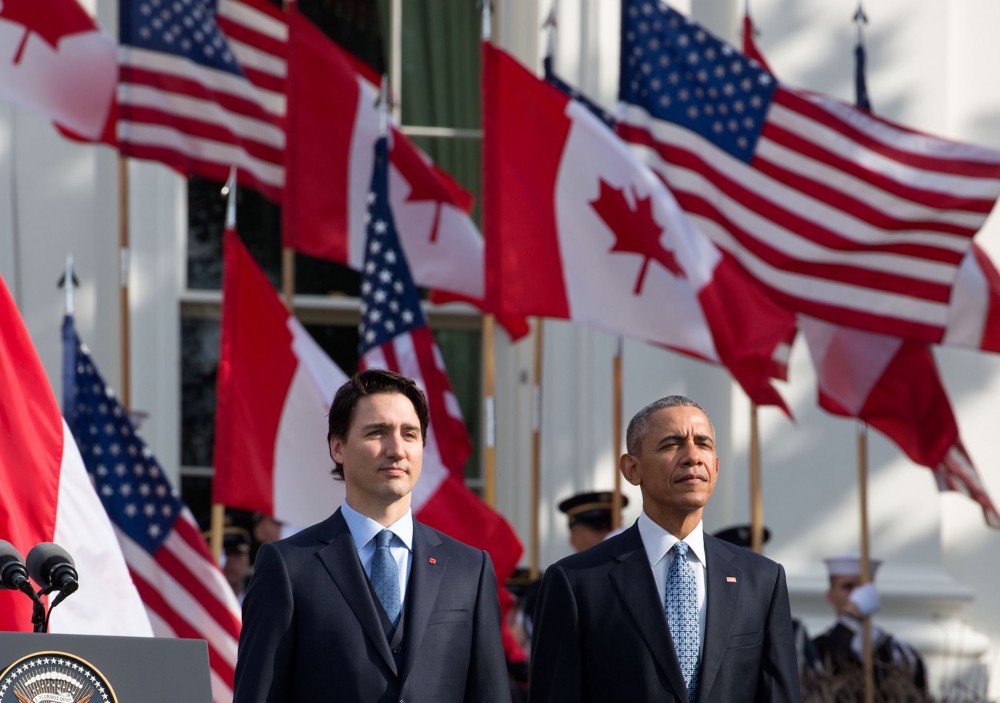 President Barack Obama and Canadian Prime Minister Justin Trudeau announced a joint plan to cut methane emissions from the oil and gas industry and a suite of plans to protect the environment in the Arctic on Thursday.

Alaska’s congressional delegation — Sens. Lisa Murkowski and Dan Sullivan and Rep. Don Young — criticized the statement as myopic and lacking in input from anyone from the United States Arctic.

Obama and Trudeau made the announcement with climate change in mind, both resolving to lead the world “in the low-carbon global economy… including through science-based steps to protect the Arctic and its peoples” and by implementing the promises of the Paris climate agreement, according to a statement from the White House.

The U.S. and Canada can do “more to protect our countries and our communities — especially in the Arctic — from climate change,” Obama said Thursday morning in Washington, D.C.

“As the first U.S. President to visit the Arctic, I saw how both of our nations are threatened by rising seas, melting permafrost, disappearing glaciers and sea ice,” Obama said at a joint press conference with Trudeau in the Rose Garden later in the day.

Raising the bar
Trudeau said the nations’ partnership in the Arctic would put “the bar higher in terms of preserving the biodiversity in the Arctic.”

The U.S. and Canada leaders said they will aim to cut 40 to 45 percent of the oil and gas industry’s methane emissions from 2012 levels by 2025, from both existing and new wells. In the U.S., the Environmental Protection Agency will begin drafting regulations immediately.

Methane emissions account for only about 10 percent of U.S. greenhouse gas emissions — the type of air pollution that causes climate change — with other emissions like carbon dioxide making up the bulk of greenhouse gases. But methane has a far greater impact on climate — about 25 times that of carbon dioxide over a 100-year period — and in some areas is more cost-effective to rein in than other pollution.

Methane is the main component of natural gas. It sometimes leaks from well bores or the ground when oil or gas wells are drilled.

New regulations for oil and gas industry
Getting final methane regulations across the finish line would take the EPA at least two years, which means the outcome is most certainly up to the next president. It’s very likely that both current Democratic presidential candidates would choose to continue Obama’s methane charge. Those remaining in the field of Republican candidates are likely to put a stop to new oil and gas regulations.

But the agency will begin those efforts.

“Next month, EPA will start a formal process to require companies operating existing” oil wells “to provide information to assist in development of comprehensive standards to decrease methane emissions,” the White House said.

Canada will take similar action, proposing new regulations by early next year, and two countries plan to collaborate on policies and strategies.

The two also promised to work on integrating more wind, solar and hydro power into electrical grids, align energy-efficiency standards for consumer products and other efforts to support energy innovation.

Meanwhile, the future of the Arctic in Alaska and Canada drew attention from the president and prime minister.

The White House released reports on the Arctic timed with the prime minister’s visit. One examines the outcome of the Obama administration’s Arctic commitments in 2015. Another looks forward to 2016.

But sustainable, for Trudeau and Obama, means commercial activities, “including shipping, fishing, and oil and gas exploration and development” that can only happen under the “highest safety and environmental standards,” they said.

The pair want to keep Arctic shipping corridors “low impact” to limit risks posed by heavy fuel oil use and black carbon emissions from shipping in the Beaufort Sea, they said.

Murkowski and Sullivan said the plan was short on Alaskan input and charged that it wouldn’t do much for the state’s Arctic people.

Sullivan said that for him, it was a week full of “Canadian diplomacy” — just not with his own administration.

Lack of input from Alaskans
The junior senator met with Canadians at an international seafood convention in Boston on Sunday, and had dinner with Canada’s new ambassador David MacNaughton on Monday. On Thursday he met with Trudeau’s chief cabinet secretary and also with the prime minister himself, at a meeting with about 10 other senators. In the meetings, Sullivan raised issues related to subsistence quotas and transboundary mining, he said.

And he told Trudeau that “we appreciated the highlight in the joint statement” on the Arctic, but that it should have been called an “Alaska-Canada statement,” and it lacked “emphasis on the importance of jobs and economy” and the oil and gas industry.

The meetings served as a “pretty dramatic contrast with what was going on with our own federal government,” Sullivan said. “We weren’t asked for any input,” and the delegation struggled to gather information from the administration in advance of the announcement, he said.

“With all due respect, a lot of the policies that they’re laying out aren’t going to do anything to protect us. They’re going to further undermine a struggling economy and the further loss of jobs that unfortunately we’re seeing in our state,” Sullivan said.

Murkowski said in a statement that the announcements “fall far short of the holistic vision needed for the Arctic and its people.”

“My long-standing criticism of the Obama Administration is that it sees the Arctic through the singular lens of climate change. It has failed — for almost eight years, today included — to account for the full range of issues and needs in the region,” Murkowski said.

Alaska Rep. Don Young said the announcement makes clear that the Obama administration has no interest in resource development in Alaska. “If the President were serious about building a resilient Alaska, as he’s stated on numerous occasions, he wouldn’t systematically target our already sensitive economy and the industries that support it,” Young said.

Cindy Shogan, executive director of the Alaska Wilderness League, said the announcement sets “the stage for a future in which our nation’s shared Arctic resources are managed under the strongest environmental ethic.”

“As the Arctic ice melts due to climate change, it has opened the way to increasing demands from commercial shipping, oil and gas development, and commercial fishing, while devastating wildlife habitat and the communities that live there. We look forward to working with the Obama administration to ensure that all future of the Arctic management decisions adhere to the goals set out today,” Shogan said, adding that oil and gas development in the Arctic “should be taken off the table.”

Obama and Trudeau announced their plans at the start of the first official visit by a Canadian prime minister in nearly 20 years, according to Obama’s remarks Thursday.

Trudeau arrived at the White House on Thursday morning with his wife, Sophie Gregoire-Trudeau, where they were met on the South Lawn by Obama, first lady Michelle Obama, Secretary of State John Kerry, National Security Adviser Susan Rice, Canada’s ministers of trade, environment, defence and fisheries, and other officials.

The official visit was marked with a 21-gun salute and a military greeting, and a bit of prodding from Obama about his hometown hockey team’s hold on the most recent Stanley Cup. Trudeau responded in his remarks by name-checking several Canadians who play for the Chicago Blackhawks.

Obama noted longtime friendships between Canada and the U.S.: “Up in Hyder, Alaska, folks head across the border to celebrate Canada Day, and folks in Stewart, British Columbia, come over for the Fourth of July,” Obama said.

On Thursday evening, the Obamas held a state dinner at the White House for the visiting Canadian guests. The guest list included Murkowski’s co-chair of the Senate Arctic Caucus, Maine Sen. Angus King, but no Alaskan lawmakers or others from the state.

The menu did reportedly include Alaska Halibut.