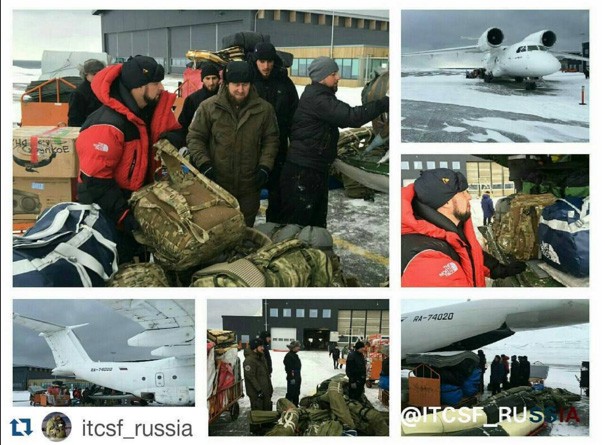 Chechen special forces used Longyearbyen airport on Svalbard for transportation of personnel and equipment for an airborne drill close to the North Pole.
By

“Flying Squad” – a combat group of Chechen special forces, has recently finished an exercise close to the North Pole, and are on their way back to the homeland, the website of the Head and Government of the Chechen Republic reads. “We are preparing to meet our heroes,” Ramzan Kadyrov says.

The paratroopers were dropped onto the ice from an Il-76 airplane on March 29. They jumped out from a height of 2500 meter, and started their exercise, which included a 20 kilometer long hike and an attack on an ‘enemy command post’. The paratroopers conducted another jump, this time from a Mi-8 helicopter, and unfolded Russian and Chechen flags in the air, Grozny Inform writes.

Before the expedition to the Arctic, the Chechen paratroopers had been trained in a special program, developed jointly with the Russian Geographical Society.

Cargo and other personnel were brought to the area by a plane from Longyearbyen in Svalbard. The Chechen delegation was lead by Ramzan Kadyrov’s aide on law enforcement issues Daniil Martynov. Kadyrov’s Instagram account published photos of Martynov and other people loading cargo into an An-74 plane on Longyearbyen airport.

According to Jamestown Foundation’s Eurasian Daily Monitor, Major Daniil Martynov is the chief of FSB’s Alpha group (Directorate A of the FSB Special Purpose Center).

The stay on the ice lasted much longer than originally planned, as the runway prepared by technicians from the Russian geographical Society’s Expedition Center cracked up and could no longer be used after just one landing, Vesti reports.

The Chechen soldiers helped the technicians construct a new runway. This was used for the first time on Tuesday, according to Barneo’s Facebook account.

As Barents Observer reported, also Russian airborne troops are planning an exercise close to the North Pole in the coming weeks. They are also planning to use the airport at Svalbard for transportation of equipment and instructors.

Norwegian demands halts new flights
The Russian Geographical Society’s Expedition Center on its Facebook account complains that Norwegian authorities have given permission for only one flight more from Longyearbyen to Barneo. Eleven other flights that were declared in advance have been denied. The reason for this is supposed to be a trip the An-74 took to Murmansk last week with camp equipment that was going to be airdropped together with fuel and food for the people stranded on the ice floe. “Now we were suggested to start from the scratch - apply for the next flight 48 hours in advance,” a message on the account reads. Many tourists and 55 marathon runners are waiting for transportation form Svalbard to Barneo, they say.

Head of operations at Longyearbyen airport Carl Einar Ianssen confirms to Barents Observer that the Norwegian Civil Aviation Authorities have issued new regulations for the An-74 flying between Longyearbyen and Barneo, and that they now have to report passenger lists and cargo lists 48 hours before take-off.

Norwegian Civil Aviation Authorities have not yet answered questions from the Independent Barents Observer about the new regulations.

Demilitarized Svabard
This use of Svalbard as part of preparation to military exercises could be in conflict with the Svalbard Treaty. Article 9 prohibits naval bases and fortifications and also the use of Svalbard for war-like purposes. The Norwegian Government in its White paper on Svalbard explains that “All foreign military activity in Svalbard is prohibited and would entail a gross infringement of sovereignty.”

“Unless they involve innocent passage through territorial waters, foreign military and civilian government vessels wishing to enter Norwegian territorial waters around Svalbard must apply well in advance for diplomatic clearance. The same applies to calls at ports in Svalbard and landings at airports. […] The Norwegian authorities follow very restrictive practice with regard to granting such clearance.”

Geir Ulfstein, Law Professor at the Department of Public and International Law at the University of Oslo says to the Barents Observer that an interesting question concerning the kind of use of Svalbard that we now are witnessing, is how far Article 9 of the Treaty reaches when it comes to prohibition of the use of Svalbard ‘for war-like purposes’. “But in this connection it is central that Norway has the sovereignty over Svalbard. Norway can prohibit paratroopers on Svalbard in the same way as on the mainland, unless other countries can claim concrete rights as a consequence of the Svalbard Treaty. It is hard to see how Russia could find any such rights in the Treaty,” Ulfstein says.

“Norwegian authorities have nothing against flights via Svalbard, as long as regulations are being followed,” Communications Adviser at Norway’s Foreign Ministry Ane Haavardsdatter Lunde says to the Barents Observer. “All activities on Svalbard must be carried out in accordance with Norwegian laws and the given permissions,” she adds.