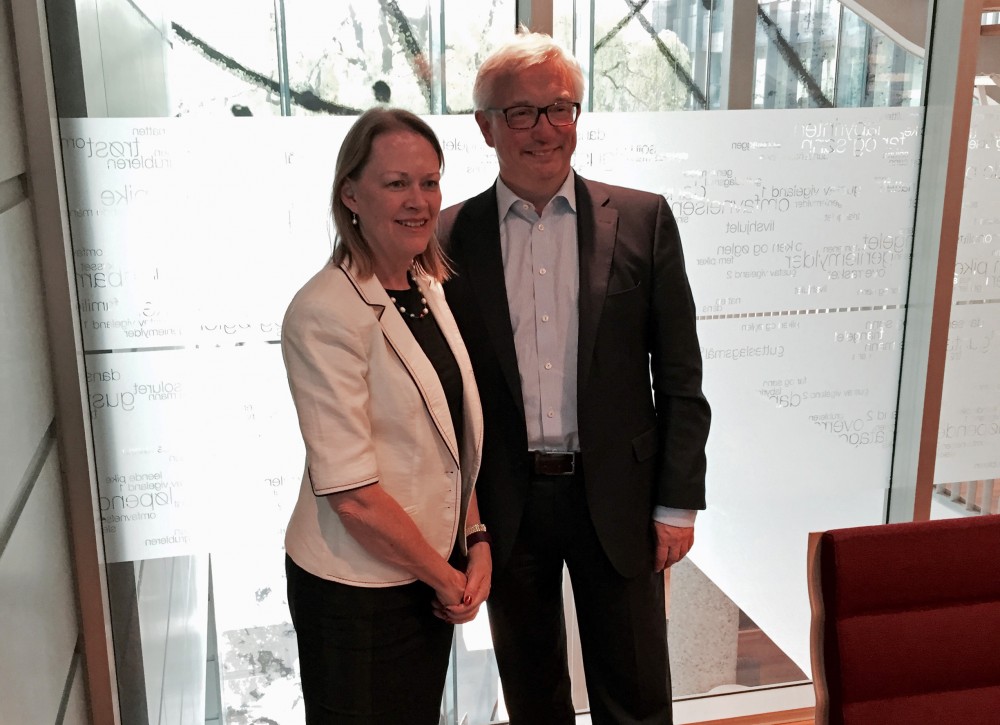 Mary Warlick had meetings with Norwegian stakeholders to discuss the situation in the oil industry and energy cooperation between Norway and the USA. Here she is with Karl Eirik Schjøtt-Pedersen, Secretary General of the Norwegian Oil and Gas Association. Photo: US Embassy

Clean and renewable energy options for people living in the Arctic is one of the focal points for the U.S. chairmanship of the Arctic Council. Many new initiatives are on their way, principal deputy assistant secretary of the the US Department of State's Bureau of Energy Resources Mary Warlick says to Barents Observer.
By

Ms Warlick, who assumed the high-ranking position in the US Department of State’s Energy Resources Bureau in August 2014, last week visited Norway in connection with her position as board member of the Extractive Industry Transparency Initiative. She also used the opportunity to talk with Norwegian officials and other stakeholders about some of the Arctic Council issues to which her bureau is contributing.

“In the energy area our priority is to promote sustainable economic development in remote Arctic communities through sustainable and clean energy options,” she says in a telephone interview with the Barents Observer, and explains that the Bureau of Energy Resources has been contributing to three big initiatives in the context of the overall Arctic Council initiative.

Many remote Arctic communities have very high energy costs. Some places, for example in Alaska, where about 140,000 people are spread over an area twice the size of Texas, are not accessible by road, and have to have diesel fuel shipped or flown in via by barges of airplanes. Many places have great access to wind, hydro and geothermal resources, but growth in the renewable sector has been slow.

“What we are trying to do with the ARENA initiative is to really promote leadership and develop capacity with respect to the development and management of clean energy. We’re looking specifically to set up a series of webinars and onsite training for 10-20 fellows from across the Arctic states and indigenous permanent participants,” Ms Warlick says to the Barents Observer.

The program was launched in October 2015, and has USA, Canada, Finland and Iceland in the co-leadership. Ms. Warlick says she would certainly welcome Norway’s participation and even co-leadership in the ARENA initiative. According to the program’s website, the first onsite training will take place during the summer of 2017, and will consist of three one-week sessions, each hosted at a different Arctic nation or permanent participant location.

Another initiative the Bureau of Energy Resources is promoting in the Arctic Council cooperation is the Arctic Renewable Energy Atlas (AREA). Together with Arctic-based NGO’s they are developing an atlas over clean energy resources in the Arctic region, that will provide solar, wind, geothermal, marine and hydrokinetic resource maps within an easily accessible website.

The thought is that this atlas will give a fuller understanding of where renewable energy resources are throughout the Arctic region. It is meant to help promote awareness and also encourage climate-friendly investment. “We think being able to see visually how far along Arctic countries have come in developing renewable energy sources will be really helpful in helping to convey what the clean energy potential is within the Arctic and outside of it,” Ms Warlick says.

The Atlas will eventually also include energy consumption and efficiency data as well as videos on clean energy produced at the community level.

The Bureau of Energy Resources has developed and held a number of workshops on the subject of responsible sustainable development and management of Arctic oil and gas resources.  At workshops in Iceland, Greenland and Finland, the bureau has brought together experts form around the region, including the United States.

The experts come from a variety of stakeholders, including government, indigenous communities and others are discussing what sorts of mechanisms and legislative issues that need to be addressed and looked at when it comes to how those resources are going to be developed into the future. “The statistics show that the Arctic Circle still holds something like 13 percent of the world’s discovered oil and 30 percent of the world’s undiscovered gas deposits, as well as lots of mineral resources,” Ms Warlick says. “So while there is not a great rush at the moment to develop those resources, they do represent a significant potential and they do need to be developed in a carefully managed and sustainable way.”

A project that is still under development by the Bureau of Energy Resources is the Arctic Clean Energy Prize. “We are looking at a Arctic clean energy business plan prize where the idea is to pull together various stakeholders and promoting entrepreneurship, pulling out ideas for clean technologies to reduce diesel use for home heating and electricity generation in remote communities, because this is an on-going challenge for many remote communities in the Arctic, it certainly is in the United States, Ms Warlick explains.

Teams from colleges and universities within all Arctic states will be invited to submit concise business plans that address region-specific barriers to clean energy deployment. The best teams from each country will be invited to present their proposals, and the overall winner will receive a cash prize.

When it comes to Arctic issues, the United States and Russia continue to work quite closely, and are doing so quite well, Ms Warlick says. “The on-going sanctions towards Russia with respect to their Minsk commitments do remain, and we would want to see those sanctions remain in place until such time as the appropriate steps are taken. But our relations and cooperation with Russia in the Arctic on issues related to the environment, maritime safety and law enforcement operations continue just as it does with Russia on major international issues and challenges.”

The diplomat believes that renewable energy could be an area for more future cooperation with Russia. She says that this has been an area of huge priority and growing priority for the United States with countries all around the world. “So when the time comes, and we are in a position where we are able to step up our cooperation again, that would be a very appropriate area, and certainly Russian commitments with respect to the Paris agreement on climate change are very important.” “Russia is not only a major energy producer, but consumer as well, so we would hope they would start thinking about taking the steps to invest more in clean and renewable energy sources,” she adds.