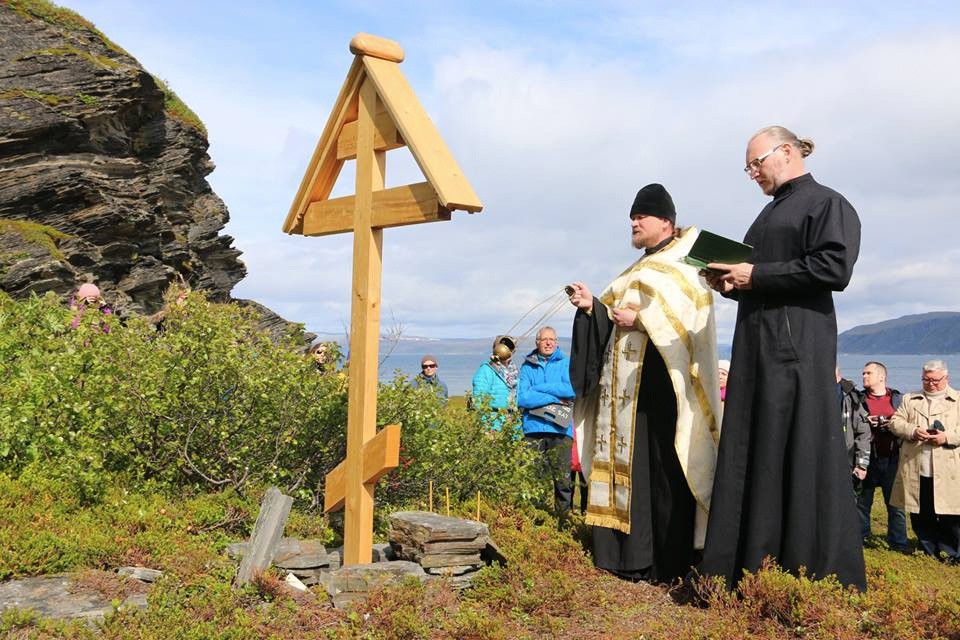 Together they put up a new cross on the grave of the Pomor sailor. Photo: Andrey Shalyov

Churchmen and diplomats from the two countries meet at the grave of an unnamed Russian sailor deceased on Norway’s Barents Sea coast more than 100 years ago.
By

The 19 year old Russian died after he got boiling water from a processing facility over his body. The year was 1903 and he was buried on the spot, on the windy island of Mårøya on the Norwegian Arctic coast.

Since then, a simple Russian Orthodox cross has stood lonely at the desolate island. Locals knew little about the man but still managed to preserve the cross.

For more than two hundred years, Norwegians and Russians met on the Norwegian Arctic coast to trade fish, grain and other goods. The trade took off in the early 18th century as a barter between the sides, and gradually developed into a regular trade against money of major economic importance for northern Norway. Key sites for the trade was Arkhangelsk on the Russian side and the towns of Vardø, Hammerfest, Tromsø and Kjøllefjord on the Norwegian side.

Then, in 2001, Kjell Sørbø, a local from Kjøllefjord, decided he wanted to find out more about the Pomor sailor. He took contact with Norwegian historians at the University of Tromsø and then with the Norwegian National Archives. Later he teamed up with Andrey Shalyov, the Honorary Consul of Norway in Arkhangelsk, and Russian ship agent Andrey Zelenin.

The sailor’s surname was probably Kozhin and he came from the lands near Arkhangelsk, Sørby found out.

Meanwhile, also the Russian Orthodox Church caught interest in the project and two priests from the diocese of Arkhangelsk were sent to Kjøllefjord to familiarize with the story.

Soon, Sørby started to collect funding for the erection of a new cross on site. In September 2015, the two meter high cross was ready and the Norwegian went to Arkhangelsk to pick it up. “It filled up my whole Toyota Hiace, and we bumped back home all the way to Norway», Sørby remembers.

On the 15th June, the cross was officially placed on site. Two men from the Russian General Consulate were represented. So were also the Russian Orthodox Church, the Church of Norway and Norwegian local and regional authorities.

«From my side, this has nothing to do with politics», Sørbø says to the Barents Observer. «The Pomor Trade is part of our past, it was the Barents Cooperation of that time», he argues.

«I am interested in the history, it shows the close bonds between our countries».

He hopes that this week’s ceremony will show to young people in the area that there is a past of cross-border interaction in the area.

The Pomor Trade over more than two centuries generated major economic activity and wealth along the Norwegian Arctic coast. While Russian traders brought with them grain and a wide range of products to northern Norway, the Norwegians sold fish. The towns of Vardø, Hammerfest, Tromsø and Kjøllefjord were all main hubs for the trade, but also smaller settlements along the coast were involved.