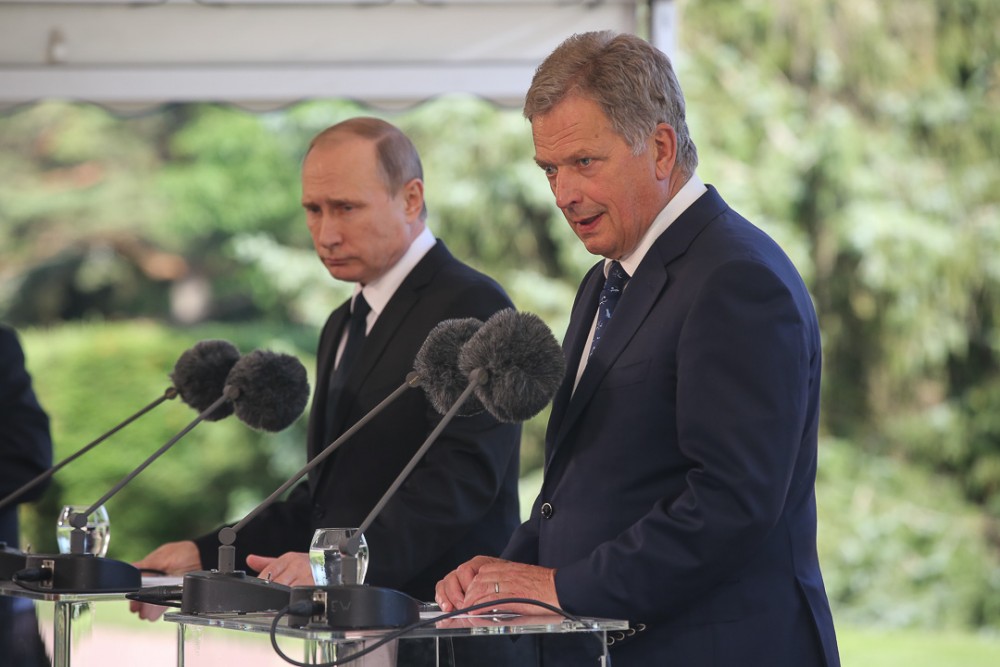 Niinistö and Putin talk to the press after their meeting in Kultaranta. Photo: Juhani Kandell, Office of the President of the Republic of Finland

Trust-building is the keyword, the Finnish President said after his meeting with Vladimir Putin.
By

“There is clearly a certain fear of Russia among the countries in the Baltic [region] as well as other places”, Finnish President Sauli Niinistö said in the press conference held in connection with Friday’s top meeting with Putin.

“In order to build trust, it is important that we take at least small steps in the right direction”, Niinisto underlined.

The visit of the Russian president comes at a time of growing tensions between the two neighbors. Just few weeks ago, Finnish Foreign Minister Timo Soini in a speech to parliament said that use of military force against Finland “can not be excluded”.

The meeting between the two presidents touched on several issues, among them trade and investments, environment, the security situation around the Baltic Sea and the situation in Ukraine.

In their joint press conference, Putin called Finland “a priority partner, and underlined that relations between the countries “truly are based on a solid foundation of friendship and good neighborhood”, a transcript published by the Kremlin reads.

The Russian state leader made several controversial statements during the press conference, among them a hint that a Finnish exit from the EU would end the troubles with sanctions. “Take contact with London, they will tell you how to proceed”, Putin recommended.

He also argued that a Finnish membership in NATO could be devastating for Finland in case of a conflict with Russia. Russian troops will be stationed closer to the Finnish border and if war breaks out, NATO will “with pleasure fight with Russia until the last Finnish soldier”, Putin said.

To everyone’s surprise, the Russian leader also said that there are “no Russian troops stationed closer than 1,500 km from the Finnish border”.  However, it is a well known fact that Russia has a number of powerful military units very close to the Finnish border, both in the Kola Peninsula, Karelia and Leningrad Oblast. Among them is the new Arctic Brigade located in Alakurtti just few kilometers from Finnish Lapland.

The Finnish-Russian top meeting was held in Kultaranta, the Finnish President’s summer residence near Naantali, southwest Finland. It comes just two weeks after the Kultaranta Talks, the high-profile venue for discussions on Finnish political and security issues. Present in this year’s talks was also Swedish Premier Stefan Lofven, who confirmed his country’s commitment to a stronger security cooperation with Finland. Lofgren and his Swedish colleagues reportedly during the event expressed their skepticism with the Finnish invitation to Vladimir Putin. That attitude was rebuffed by Niinisto who elaborated on the special Finnish relationship with Russia

“I hope you understand [the] difference, which is more significant or at least longer by more than 1,300 kilometres. Russia’s border with Finland is longer than Russia’s borders with all other EU member states combined, and nearly as long as its borders with all NATO member states. To make this situation easier to grasp, imagine Norway as Russia,” President Niinistö replied, information from the Finnish presidential office reads.