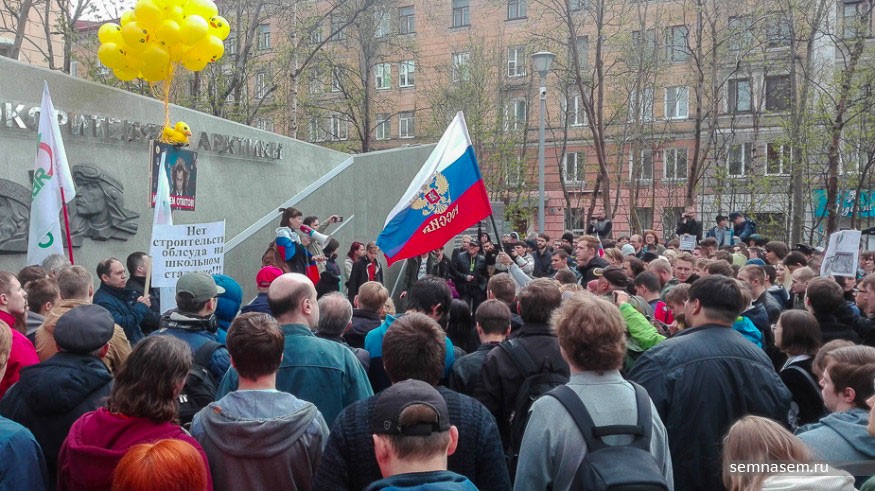 This time, the police kept the distance as young people in Murmansk, Karelia and Komi went to the streets to confront government policy.
Read in Russian | Читать по-русски
By

The anti-corruption protest initiated by opposition politician Aleksey Navalny was supported by thousands of people all over Russia. In Arctic region Murmansk, rallies were organized in Murmansk City, Olenegorsk, Apatity and Polyarnye Zory, protest organizer Violetta Grudina informs on Twitter.

According to 7x7-journal, up to 200 people attended the rally in downtown Murmansk. Local city authorities long refused to approve the site of the demonstration.

In her speech delivered on site, Grudina underlined that people now demand answers from government on the serious corruption allegations presented in Aleksey Navalny’s film about PM Dmitry Medvedev.

«People have taken to the streets to get answers from the authorities and they have [subsequently] been fired from their jobs, arrested and charged in criminal cases», she said with reference to a previous anti-corruption rally held all over Russia in March. «For what reason?» she asked. «For the fact that Medvedev took bribes and stole from his own people», she continued, a video published by Bloger51 shows.

The protest was bigger in Komi capital Syktyvkar where up to 500 people attended, 7x7 reports. It was the biggest public protest in the region since 2012, the news and blogger site informs.

In Karelia, more than 300 people gathered in the protest, 7x7 reports. More than 20 people delivered speeches during the event. Some of them also touched on the arrest of Yuri Dmitriev, the acknowledged historian who was arrested earlier this year.

In all the three regions, the site and time of the protests had been approved by local authorities. While hundreds were detained by police in Moscow, the rallies in Northwest Russia proceeded peacefully without any major police interference.