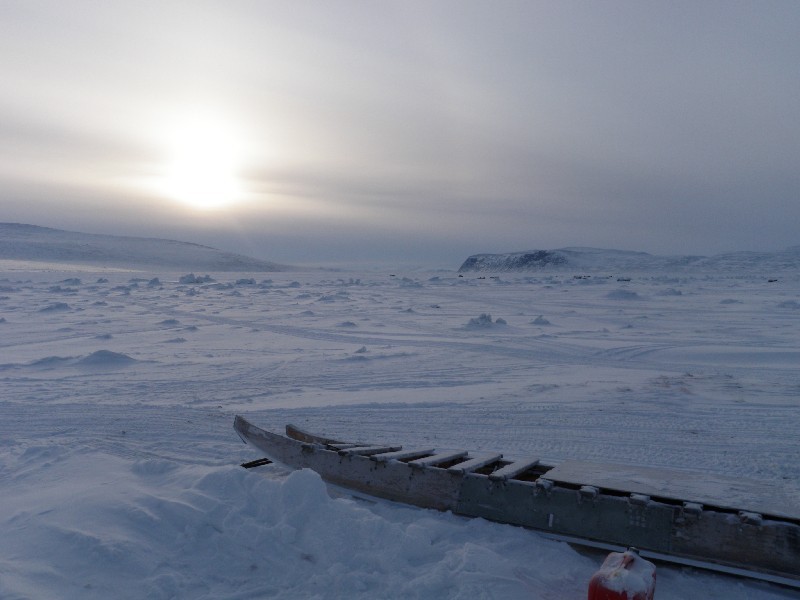 A hunter’s komatik on the sea ice near the community of Clyde River, Nunavut. Photo: Eilís Quinn / Eye on the Arctic

“The consultation process here was, in view of the Inuit’s established treaty rights and the risk posed by the proposed testing to those rights, significantly flawed,” the ruling said.

“Nor were the Inuit given meaningful responses to their questions regarding the impact of the testing on marine life. While the NEB  (National Energy Board) considered potential impacts of the project on marine mammals and on Inuit traditional resource use, its report does not acknowledge, or even mention, the Inuit treaty rights to harvest wildlife in the Nunavut Settlement Area, or that deep consultation was required.”

In Canada, the case launched by the Inuit community of Clyde River has been closely followed, not only for the environmental questions it’s raised, but because it’s highlighted questions about  government’s duty to consult with Canada’s Indigenous People’s on projects affecting the waters and lands they rely on for hunting.

The exploration project was initiated by companies Geophysical Company ASA (TGS), Petroleum GeoServices (PGS) and Multi Klient Invest AS (MKI), who planned to use seismic testing to locate resources in Baffin Bay and Davis Strait, waterways located between Canada’s eastern Arctic and Greenland,

But Inuit in the community of Clyde River said their views weren’t fairly considered, little documentation was available in Inuktitut, and that the project could have irreparable consequences for the walrus, seal and whale the community relies on for food.

The hamlet of Clyde River and the local Nammautaq Hunters & Trappers Organization then launched their lawsuit saying that Canada’s federal government has a constitutional duty to consult Indigenous communities on projects affecting their lands and that the NEB consultations weren’t enough.

The case has been winding its way towards Canada’s highest Court ever since.

Seismic testing is used by energy companies to locate oil and gas under the seabed.

It involves sending sound waves to the ocean the floor using air-gun blasts.

The way the sound reflects back up gives companies data that helps them know where to explore, how deep they’ll need to go, and how big an area they’ll need to target in order to access potential energy resources.

But Indigenous communities and environmental groups around the world have raised concerns over the short- and long-term effects of the sound waves on wildlife and marine mammals.

The Supreme Court noted that accommodations recorded by the NEB’s environmental assessment report after limited Inuit participation included things like putting community liaison officers in communities affected by the testing and the design of an Inuit Qaujimajatuqangit (Inuit traditional knowledge) study but said this was not enough.

“These changes were, however, insignificant concessions in light of the potential impairment of the Inuit’s treaty rights,” the ruling said.

“None of these putative concessions, nor the NEB ’s reasons themselves, gave the Inuit any reasonable assurance that their constitutionally protected treaty rights were considered as rights, rather than as an afterthought to the assessment of environmental concerns. ”