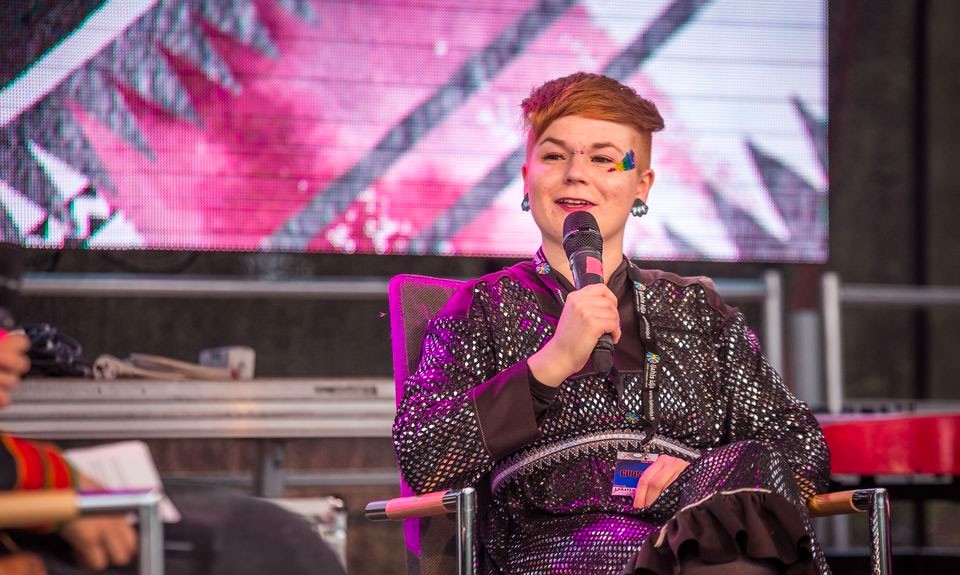 What is it like to represent sexual and gender minorities in the Land of the Sámi?
Read in Russian | Читать по-русски
By

One of the main themes of the recent Yle Sápmi Arena was Queer Sápmi, generations and solidarity.

The discussion was led by Martta Alajärvi, a journalist of Yle Sápmi in Finland. The participants were cultural worker and drama director Pauliina Feodoroff, and Anne Olli and Timimie Märak, both organizers of the Sápmi Pride event held in Inari.

Anne Olli, the organizer from Finnish Sápmi, told at the Yle Sápmi Arena that such events are extremely important.

“We need events that bring queer Sámi together. It’s really important that we get to meet, discuss with and learn to know each other.”

Timimie Märak, the organizer of Sápmi Pride from Swedish Sápmi, considers Sápmi Pride marches as important for queer people, but also for others.

“We need Sápmi Pride. It’s a way of providing queer Sámi with a physical place to come to. The Land of the Sámi can be a very quiet place, and if we don’t work for making queer people a natural part of the population in Sápmi, how can they be a natural part of anything?”

“Gender is not the main point. Support people, come and participate in Sápmi Pride marches. This year’s event was a great event, as so many people saw us marching because of the Ijahis Idja indigenous music festival.”

“There was such a warm feeling when we marched. You didn’t need to fear anything, Feodoroff describes.”

“I need both water and air”

Sámi queer people face two kinds of racism. It is not always easy to be part of a minority and openly both Sámi and queer.

In connection with Sápmi Pride, Anne Olli told the radio channel Yle Sápmi that she must sometimes choose whether to be queer or Sámi.

Pauliina Feodoroff has had similar experiences.

“It’s true. In a way, you always have to choose whether to be Sámi or homosexual.”

The other organizer of Sápmi Pride, Timimie Märak, points out that you can’t expect people to choose.

“For me, having to choose whether to live my own life or to be just queer or just Sámi would be like choosing between water and air. I need both.”

“It’s not a question of just loving another person, but also of loving yourself. That you can love your whole self,” Märak said at the Yle Sápmi Arena.

Pauliina Feodoroff tells that racism against Sámi sexual and gender minorities is manifested in many ways. According to her, there is a need to discuss the issue more deeply within society.

“We are a target of two forms of racism. It’s difficult that we Sámi still don’t dare to say that we face structural racism. We don’t have mental health services that would, for example, deal with how colonialism has affected us. Those treating us don’t understand why we feel the way we do.”

“And if even your own family abandons you, whom do you turn to? Who will understand you then? We are such a small community; every year, we lose people because they decide to leave Sápmi in order to cope. We lose people because they no longer have the strength to go on living. This issue concerns our whole nation; we are not just a weird group of people on the fringes. It is through us that these things become visible,” Feodoroff reflects.

There was also opposition to the Sápmi Pride event in the village of Inari.

“I have come out of the closet by arranging this Sápmi Pride. They haven’t thrown any shit at me yet – well, maybe a bit – but there are many forms of racism here in Inari. For example now, with Sápmi Pride, posters have been torn away or covered by other posters,” Anne Olli tells.

Pauliina Feodoroff had fresh experiences to tell about at the Yle Sápmi Arena.

“Last night, I heard extremely sexist comments about women. I really wonder why you have to talk so rudely and with such contempt?”

“Listen, and you will learn”

Pauliina Feodoroff has known about her sexual orientation since she was a child. But it wasn’t accepted by the people around her.

“I’ve known about the nature of my sexuality since I was three – and think how long it has taken for me to be myself openly. I’ve been told that it’s a sickness, a sin.”

Despite many difficult experiences, Feodoroff feels that being a queer Sámi is now more accepted than before.

“The situation has changed really a lot during my life. It’s now a bit easier to be a lesbian, but there is still a great deal of violence. Those who belong to gender minorities suffer from it. They are easily pushed outside their own group of people and society.”

“Listen, and you will learn; you can do at least that much. This is a fight that belongs to everybody.”