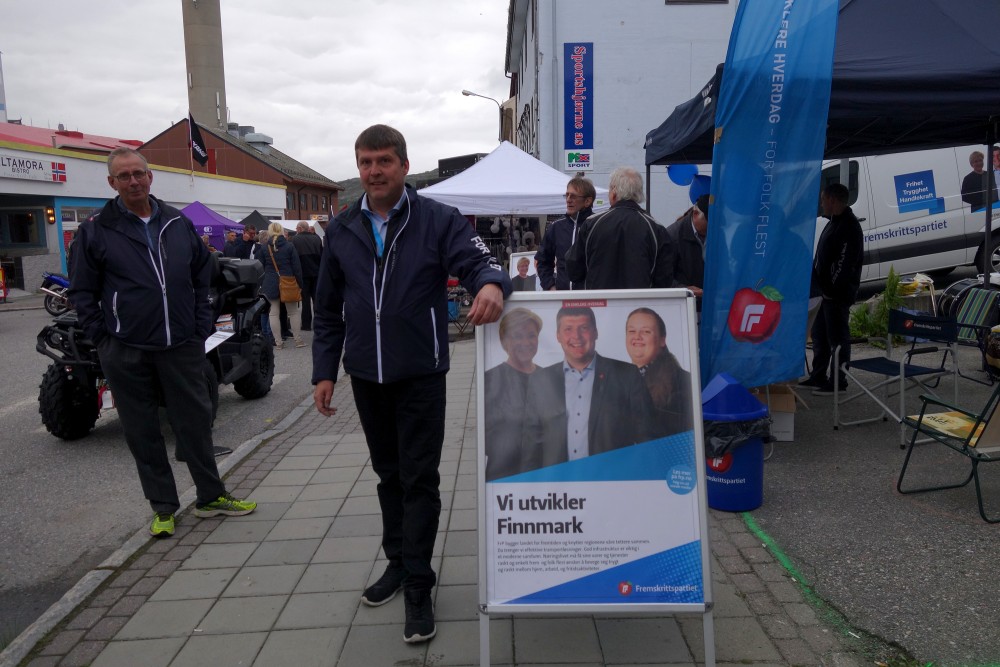 As parliament elections draw closer, several leading representatives of government junior partner Progress Party say they want an end to the sanctions against Russia. Among them is Bengt Rune Strifeldt, the party’s top candidate from Finnmark, the northern region bordering on the Russian neighbour.
Read in Russian | Читать по-русски
By

It is far from a new trend that European rightwing parties call for closer relations with Moscow and the abolishment of sanctions. And especially in connection with national elections.

Now the turn has come to Norway.

In a political debate in Kirkenes, northern Norway, on Friday, party representative Strifeldt confirmed that he wants Norway to shift its policy towards Russia and lift sanctions. In a subsequent interview with the Barents Observer, the politician underlined that he will actively engage in the issue if he is elected to the Storting [Parliament] in the upcoming 11 September vote.

«We here north are the ones who feel the sanctions the most and therefore it is natural that we call for them to end», he stresses.

«If we are to use the potential which lies in our neighbourly relations with Russia we have to work for the abolishment of the sanctions, he have to try to solve the issues on a very different level than to introduce sanctions».

The statements from Strifeldt comes only few days after prominent party colleague Christian Tybring-Gjedde made headlines with the same message. According to Tybring-Gjedde, it is time to acknowledge that «Russia will never abandon the Crimea».

The Progress Party is junior coalition partner in the government of Erna Solberg. The prime minister and her Conservative Party has strongly reacted to the statement from Tybring-Gjedde and underlined that a change of policy is out of the question.

The sanctions against Russia are unlikely to become a key issue in national election debates. However, in northern Norway the relationship with nearby Russia has bigger resonance, and sanctions an issue of bigger interest.

Bengt Rune Strifeldt says businesses in his region wants the sanctions to end. And he admits that people in Kirkenes, the border town, are likely to have a special interest in the issue.

«We have a very good cooperation with Russia, we have had it for generations, it is a huge market for goods and people, and it is of special importance for us living here north in Finnmark», he underlines.

Strifeldt will have good chances to make it into the Storting. In the previous periods, the Progress Party has had a representative from the region in the legislative body.

Currently, the Progress Party in Finnmark is represented by Jan-Henrik Fredriksen. Also he supports the abolishment of the sanctions.

«The best way to promote peace is to trade and cooperate between countries — that is much better than boycott», Fredriksen says to the Barents Observer.

The outgoing member of parliament has during his two periods been an active proponent of enhanced cooperation with Russia. In 2015, he was one of the founders of the Norwegian-Russian Union of Friendship, a loose group of parliament members with a special interest in Russia.

Fredriksen underlines that we would like to see Bengt Rune Strifeldt take on a key role in the Union.

«The Russians now have a major desire to keep in contact with the Norwegian parliament».