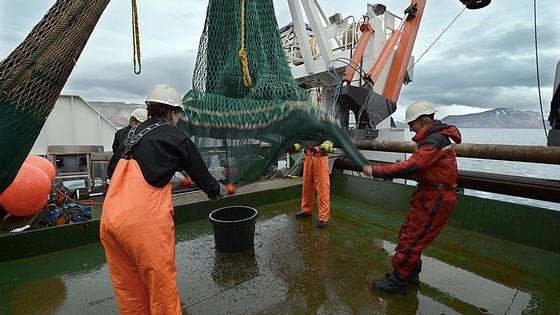 Norwegian and Russian researchers launch the most comprehensive ecosystem mapping of the two countries’ joint Arctic waters.
Read in Russian | Читать по-русски
By

It started up in 2004 and has been conducted annually ever since. The Barents Sea Ecosystem Expedition includes leading marine researchers from both Norway and Russia.

«We use to say that we examine the Barents Sea «from the bottom to the top», in the sense that the expedition includes everything from plant plankton to the biggest whales», says Geir Odd Johansen from the Norwegian Institute of Marine Research.

«In this way we manage to take the pulse on the environmental condition of the Barents Sea», he underlines.

The researchers also measure temperatures and make registrations of garbage floating around at sea.

The Norwegian research vessel «Johan Hjort» on Monday set out from Tromsø, the Norwegian Arctic city, with course for the waters around archipelago Svalbard. Later, two other vessels will join the expedition which is to last until October 4th.

From the Russian side, research vessel «Vilnyus» will engage in the same environmental mapping.

According to Johansen, none of the Norwegian vessels involved in the expedition will cross the maritime border to Russia. Meanwhile, the «Vilnyus» will be allowed into Norwegian waters, but only to conduct specific water measurements in an area near the border.

While the three Norwegian vessels share responsibilities for the mapping, the Russian ship will stay un-interrupted at sea to conduct the measurements.

The Barents Sea Ecosystem Expedition is considered the world’s most comprehensive mapping of its kind and is seen as a core component in Norwegian-Russian research cooperation in the north.

«The expedition is the only of its kind which covers the full extension of a number of organisms in the Barents Sea, it gives us a unique possibility to compare data from several levels of the food chain», the marine researcher says to the Barents Observer.

Johansen, who is coordinator for the Norwegian part of the expedition, underlines that the expedition could not have been carried out in its current form without cooperation between the two countries.

«We have cooperated with the Russians about the Barents Sea for many years and the exchange of competence and knowledge has major value for mutual professional development and understanding of the ecosystem».

The comprehensive data collected during the expedition is or key value for the management of the Barents Sea. Based on the information, the researchers make quota recommendations to the two countries’ fisheries authorities.

The recommendations are assessed by the Joint Norwegian-Russian Fishery Commission which annually set quota limitations for cod and other key species in the area.

Since the annual expeditions started in 2004 there has been a huge increase in production in the Barents Sea, the institute underlines.