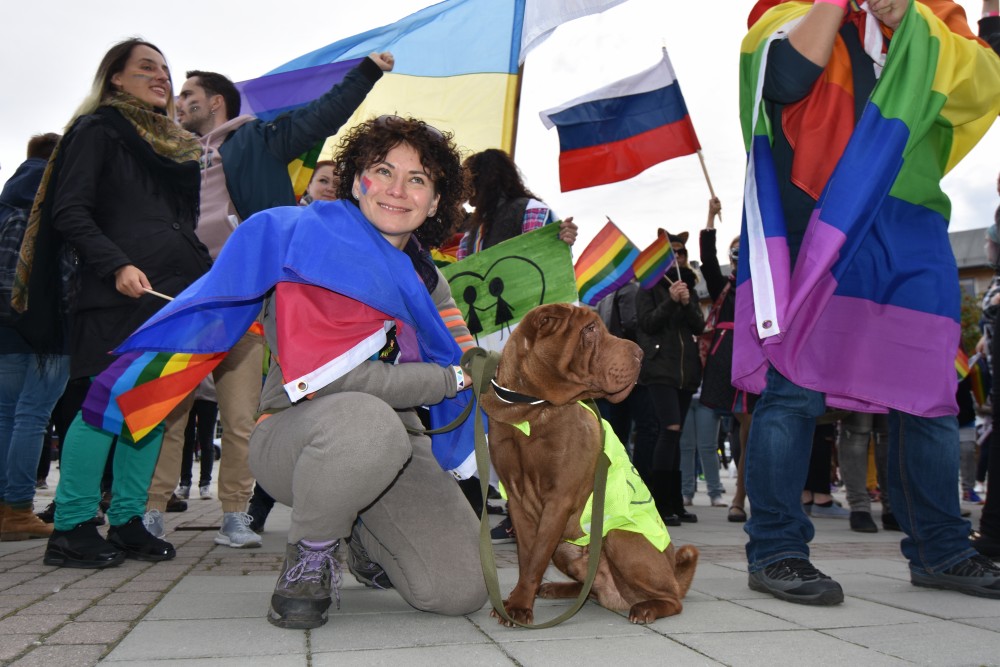 “Love has no borders” was the slogan when 200 people turned out for Pride Parade in Norway’s border town to Russia.
Read in Russian | Читать по-русски
By

“This is historic, so close to the Russian border and still it feels safe,” says Valentina Likoshva, LGBT activist from Murmansk.

She was one of about 50 people from Russia, Belarus and Kazhakstan who joined the first ever pride parade in Kirkenes, Norway’s border town to Russia in the north. Valentina is psychologist and was the leader of “The house of Equality” project at Maximum, the group for support of LGBT community in Murmansk. Maximum was an NGO that closed down after being listed as “foreign agent” a few years ago.

In Russia, pride demonstrations have often turned vilolent and are said to be among the world’s most dangerous.

Saturday’s pride parade in Kirkenes was everything else than violent.

With the town mayor in front, and smiling police standing side-by, the participants walked from the children’s school through the residental area to the central square. Here were people from Murmansk, from Arkhangelsk, Moscow and St. Petersburg. And some few other former Soviet republics.

“This dream started a few years back and today it became true, a joint Norwegian-Russian pride parade. Unfortunately, it didn’t took place on both sides of the border like we first hoped for, but we are really satisfied,” says Ingvild Endestad.

She is one of the local organizers of the Barents pride.

“It is not last time we are here,” she says, but can’t tell when Russian LGBT supporters can travel across the border for the next pride parade. “Maybe next year, we have to see,” smiles Ingvild Endestad and proclaims “we have written history.”

“Love is love” shouted the participants. In English and Russian. Ukrainian and Russian flags could be seen waving side-by-side in between posters and banners reading “Love without borders” - “Majority doesn’t exist” - “Stop homophobia” and “Love has no borders”.

Both Amnesty International and the Norwegian Helsinki Committee participated in the parade that ended a weekend where lack of LGBT rights in Russia were discussed at workshops and a in panel debate at the Community House.

Amnesty has campaigned against Chechen authorities since the Russian newspaper Novaya Gazeta earlier this year published reports that Chechen authorities had detained, tortured and even killed gay men. In Grozny, authorities responded by claiming that gay men do not exists in the Republic, even as they defended killing them in the name of “honor.”

Investigative reporter with Novaya Gazeta, Elena Kostuchenko, was one of the participants that travelled all north to Kirkenes for the seminar and pride parade.

“This is wonderful,” she tells the Barents Observer. “It is very significant because it is so close to Russia. People here live their life without fear.”

At home, Elena has been assaulted and arrested on several occasions in retribution for her journalism and activism.

“I hope it will be more meeting places like this, also a second pride parade in Kirkenes later. I have many friends that would like to come,” she says.

The aggressive homophobia of the Chechen authorities is replicated throughout society, so that gay men have to hide their identities even from their families and closest friends for fear of being attacked and killed.

Also in Murmansk, a three hour drive from Kirkenes, the gay and lesbian community have troubles with the state. In 2009, Sergey Alexeenko founded the LGBT-friendly NGO called Maximum. The organization provided psychiatric support for youth, before it was forced to close down after being branded as “foreign agents.” Cross-border cooperation between LGBT groups is not ok with Russian authorities. At least not when the Russian group received funding from their foreign partners. It is claimed to be foreign interference in domestic politics, according to the interpretation of the law.

At the town square in Kirkenes, Sergey Alexeenko spoke to the audience about life on the other side of the border.

“Murmansk and Kirkenes are similar far north and we have the same climate, but realities are very different,” Alexeenko started.

“In Norway, we meet openness and kindness,” he said and looked towards the four police officers who stood on the edge of the crowed.

“In Russia, it is totally the opposite. Realities in Russia remind about last century. Today in the former Soviet republics it is very, very dangerous to be whoever you are. You can lose you job, you can die, you can lose your family simply because you want to be yourself,” Sergey Alexeenko said.

“These trends are just becoming bigger because there isn’t any support to get from the government.”

Mayor Rune Rafaelsen says to the Barents Observer that Kirkenes is a hub for cross-border relations, also for those who’s activities are considered controversial by Russian authorities.

“It is great that we can have such network meetings in Kirkenes. For me, it is important to support the LGBT community. This is an important part of Norwegian-Russian people-to-people contacts,” Rafaelsen says.

When speaking at the town square, the Mayor started by quoting Norway’s King Harald who in a speech in support of diversity and tolerance earlier this year called for all Norwegians to take care of each other.