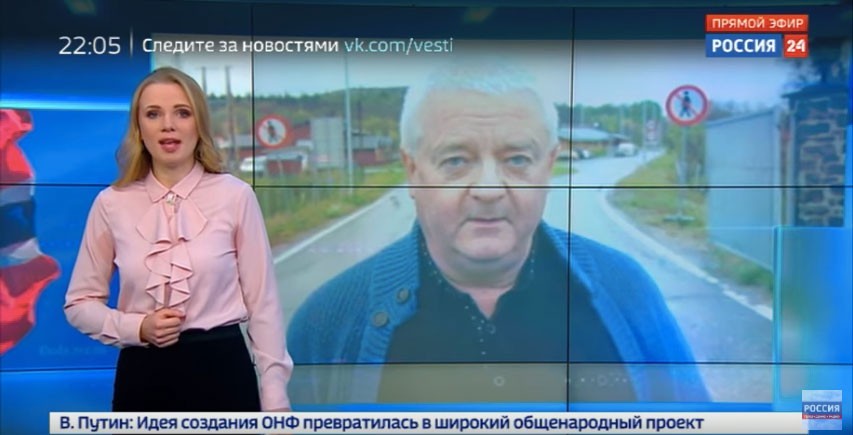 Frode Berg is probably one of several people working undercover for an intelligence network, a leading Kremlin media mouthpiece claims.
Read in Russian | Читать по-русски
By

The report broadcasted by Rossiya24 on Tuesday night left no doubt about the guilt of arrested Norwegian Frode Berg.

«Can really this good-hearted European pensioner be a spy? Investigations by Russian special services show that yes, indeed it is very possible», journalist Elizaveta Khramtsova said in the live program.

And he is not alone, the news presenter continued.

«Frode Berg is probably only one of several people working for this spy network, and the exposure was not easy, experts say, becasue they [the network] has been working a long time and thoroughly with the cover story.»

And furthermore, Khramtsova hinted, Norwegians are prone towards spying on neighbouring Russia.

«Norwegians in our country have always acted boldly,» the program anchor said and argued that the Finnish intelligence services are «acting with more care».

The TV channel’s key outside commenter for the evening was Andrey Manoylo, the frequently quoted Professor in Political Science at the Moscow State University.

However, not mentioned in the TV report, Manoylo is also a long-serving representative of the FSB. According to information from one of his own books, he in 1999 graduated from the FSB Academy and in the period 1999-2002 worked in both Norway and Denmark. He is today also a science representative under the Russian Security Council.

Manoylo added fuel to the fire. With cryptical formulations, the professor made clear that there are intelligence agents hiding behind the proponents of cooperation.

«There is a big number of public figures from Finland, Sweden, Norway whose biography is written by stamping machines, and as you know, all kind of  authorities, including the intelligence services, are drawn towards stencil plates and stamps.»

«Therefore, if I was in the position of our authorities, I would look at it the same way as when a human rights defender of a priest too keenly works for the development of relations with Russia, and thus expose themselves as targets of persecution.»

And the Rossiya24 reportage did not stop with that.

In 2015, the TV channel itself made an interview with Frode Berg about the refugee situation which had appeared on the border between Russia and Norway. The local church congregation council, which Berg himself chairs, had recently got several Syrian asylum seekers hiding from police in the church facilities.

In the interview, made in the Norwegian border town of Kirkenes, Berg speaks on behalf of the local church council and explains how the refugees had made it into the church and how the congregation was coping with the issue.

According to Rossiya24 presenter Elizaveta Khramtsova, «this interview with the Russian TV channel was not a well thought-through and professional step for a spy».

Khramtsova says Berg requested an interpreter for the interview «although it appeared that he clearly seemed to understand the Russian-language questions».

And she is supported by her colleague Anastasia Yefimova, the journalist who made the interview with Berg.

«He very carefully and thoroughly chose his words», Yefimova recalls. «This attracted our attention, after all he was neither an official, nor was he responsible for government policy. But he was extremely exact and correct in his formulations, which was very unusual».

Rossiya 24 is a state-owned channel which is part of the major VGTRK group, the same network where media hardliner and Rossiya Segodnya company director Dmitry Kiselyov has his weekly news show.

Although little is known about the arrest of Frode Berg and the alleged espionage, the case has been widely covered in Russian media.

It was Rosbalt which first reported about the espionage charges against the Norwegian. According to the news site, Berg received classified documents from a 24-year former policeman with access to classified information about the Russian Navy and was to share this information with Norwegian special services.

The case has triggered major reactions in all of Norway and especially Kirkenes, the home town of Berg.

Berg has now got Ilya Novikov appointed as his lawyer, NRK reports. Novikov has previously defended several other suspects in espionage cases.

Meanwhile, Interfax reports that Frode Berg himself appealed the court decision about his arrest. The appeal was written in Norwegian and sent by Berg himself, not by his lawyer, a press spokes person of the Lefortovo Court says to the news agency.

Frode Berg served as border inspector for 24 years before he in 2014 retired and started to engage widely in local civil society activities. He is today chair of the local church congregation council, is active in the Red Cross and board member of contemporary arts curator group Pikene På Broen.

He is known as a man strongly committed towards cooperation with neighbouring Russia and has advocated continued dialogue between the countries.

Correction: this story first referred to “many Norwegians working for an intelligence network”. That was not in line with the broadcast from Russia 24 which said that “several people” are involved. Furthermore, beyond Frode Berg, the Russia 24 did not directly refer to the citizenship of the people involved.