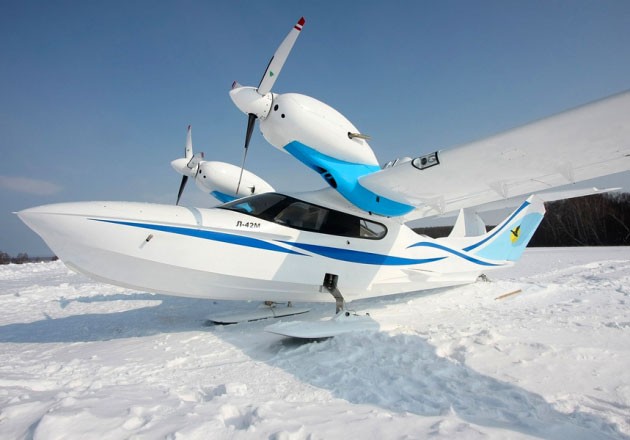 Yamal-Nenets authorities believe in usage of amphibious aircrafts like this L-42M. Photo: Aviatech1.com

The plane is specially designed for Arctic flights and will soon be on the wings over the far northern Yamal-Nenets region.
Read in Russian | Читать по-русски
By

It can land and take off from the snow, the water and the ground and is designed for flying in remote areas without infrastructure. The L-172 is Russia’s first amphibious aircraft made for the Arctic. It will soon be seen over the wide stretches of the Yamal-Nenets Autonomous Okrug, the Russian region located along the coast of the Kara Sea.

Regional government leader Dmitry Kobylkin was himself recently at the AviaTech plant in Samara where the airplanes are being constructed. According to the Kobylkin, the plane will get a wide application in his region, from ambulance flights to remote tundra areas, and also regular passenger flights.

«Furthermore, I do not exclude that the scope of the Arctic amphibious aircraft’s usage will include also tasks connected with the development of the Northern Sea Route, ice mapping and support for ships,» he says in a report from the plant visit.

The first  L-172 aircraft will be handed over to the buyers in the Yamal-Nenets in the course of 2018.

From before, the smaller L-42M amphibious aircraft is being used in the Yamal-Nenets region. However, the new L-172 is bigger and has a longer reach. It has a top speed of 380 km/h and a maximum flight range of 2,000 km. It can carry seven people.

It is believed that the L-172 will be widely applied along the coast of the region, including in the area of the Bely Island, the Vilkitsky Island and the peninsula of Gydan. Among operations will be environmental observation, search and rescue, medical aid, ship supply, as well as various other special tasks, a press release from the regional government reads.

Flights with amphibious aircrafts in the Arctic are far from new. Already in the early 1920s, Soviet explorers applied the multi-functional planes in their expeditions. In 1928, Soviet pilot Eduard Krasinsky flew with a amphibious aircraft type «Sovetsky Sever» from the Wrangel Island and all along the Arctic Soviet coast. Several other amphibious aircrafts were developedby Soviet engineers, starting from the M-1 (1913), M-9 (1916) and later the R-1 and ultimately the giant Be-12 «Chaika», the A-40 «Albatros» and Be-200.