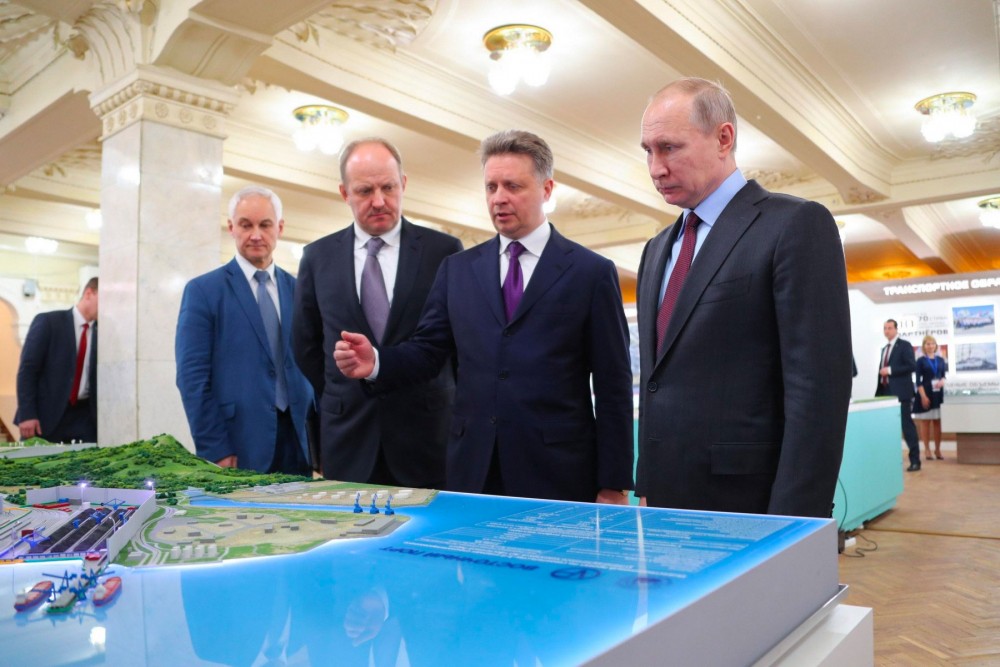 No focus on the major financial challenges connected with the Murmansk Transport Hub as President Putin took at look at the development plans for the Lavna coal terminal.
Read in Russian | Читать по-русски
By

«This complex has a strategic importance for the growing export of coal and relocation of goods flows away from the Baltic,» General Director Sergey Khramagin told Vladimir Putin during the recent National Transport Congress in Moscow. During his visit to the congress, the president took at stop at the project presentation stand in the conference premises.

Khramagin heads the State Transport Leasing Company, which owns the Lavna Sea Trade Port, the major coal terminal project on the western side of the Kola Bay. The terminal project is closely connected with the development of the Murmansk Transport Hub, one of the biggest ongoing infrastructure projects in the Russian north.

The terminal project includes the annual handling of up to 18 million tons of coal. It is to help boost regional coal exports and release pressure on terminal facilities near the city center of Murmansk.

According to Khramagin, the Lavna project is developed with investments from Mercuria, the Swiss international commodity company. A project concession agreement with the federal government is now in the process, he told Putin.

The price tag for the project is estimated to 24.9 billion rubles (€354 million).

The project developers intend to load the first shipment of coal in Lavna in year 2020. That same year, a total of nine million tons of coal is to be handled on site. In the subsequent 2021, the volumes are to increase to 18 million tons, Director of the Lavna Trade Port, Sergey Krivolapov told Interfax.

The development of the Lavna project has not come easy.

Several companies have abandoned the project over the last years. In 2016, the State Transport Leasing Company took over the project and subsequently managed to get Mercuria on board.

Also oil companies have been involved and Rosneft long considered to build an oil terminal on site.

The Lavna coal project is closely connected with the development of the Murmansk Transport Hub and the building of a 46 km long railway along the western shore of the Kola Bay. It has been a top priority project for the regional authorities in Murmansk for more than a decade, aimed at facilitating the development of industrial activities on the western side of the fjord.

In 2014, company Stroygazkonsulting won a federal contract worth 41.5 billion rubles on the building of the infrastructure object and construction works started shortly after.

«This is one of the biggest transport infrastructure projects unfolding in our country at the moment», Sokolov underlined as he in June 2016 paid a visit to Murmansk Oblast. «The current pace in construction allows us to look with confidence at the project’s future», he added.

During his visit to Murmansk in April 2017, Prime Minister Dmitry Medvedev made clear that project revisions are needed and that private investors will have to be more involved, and at a meeting with President Vladimir Putin in August, Transport Minister Maxim Sokolov informed that the project lacked 23 billion rubles.

Sokolov at the same time made clear that total estimated price for the project has grown to 50 billion and that credits might have to be obtained.

Federal authorities have also hinted that goods volumes on the new railway might ultimately be too small. Deputy Prime Minister Arkady Dvorkovich in a government meeting last year reportedly made clear that more agreements  on goods traffic on the line would have to be concluded, newspaper Kommersant reported.