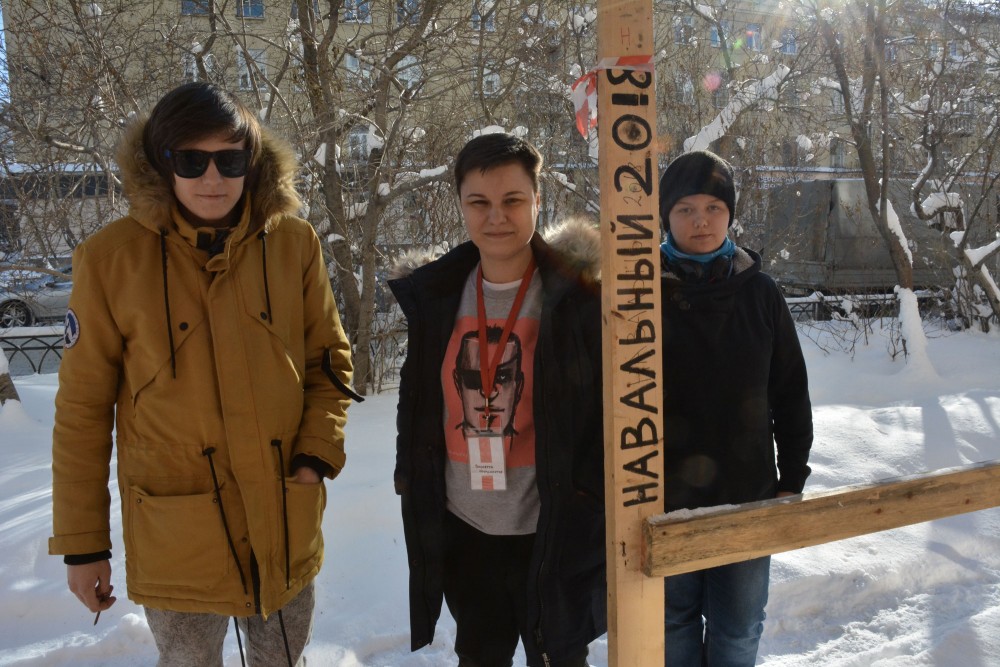 They are young and call on Russians to boycott the presidential election.
Read in Russian | Читать по-русски
By

«The biggest nightmare of this regime is the low turnout, because a low turnout makes it harder for them to falsify the results, says Violeta Grudina, leader of Aleksey Navalny’s regional office in Murmansk. Ever since opposition candidate Navalny was barred from running in late December, Grudina and her volunteers have handed out thousands of leaflets to locals all over the Murmansk region with calls to stay home on the 18th March.

According to Grudina, the regime is now desperately trying to activate the electorate.

«They are doing whatever they can to get people to the polls; they organise competitions, they deceit them, tempt them, threaten them, pressure them. People are told that they will lose their jobs unless they go to the polls and vote for Putin», Grudina says to the Barents Observer.

«So in this sense, we are clearly the biggest threat against Putin’s regime.»

The 28-years old woman has led the Murmansk regional office of Aleksey Navalny since it opened in June 2017. She is surrounded by volunteers, almost all of them in their twenties.

The Navalny office is located centrally in downtown Murmansk. Only about fifty meters down the road is Vladimir Putin’s campaign office.

Taraz Tarazov is one of Putin’s local office managers. He is all alone in the modern premises which are broadly decorated with big photos of Vladimir Putin and his slogans about the need for «a strong Russia».

It is quiet here today, but on previous days there have been plenty of people coming by, Tarazov makes clear.

The local Putin spokesman says that he is not concerned about Navalny and his efforts to boycott the election.

«The way we see it, Navalny’s supporters are mainly under-aged people who do not even have the right to vote. So he does not really play a role at all, and furthermore he is not even a candidate in the election,» he underlines.

«He does not make us worried.»

According to Tarazov, the election campaign in Murmansk has proceeded smoothly without any major problems.

And as a matter of fact, he underlines, over the last two weeks there has been a significant upswing in the regional support for Putin. It can be explained with the powerful 1st March speech of the President to the federal assembly, where he lashed out against the West and presented new arsenals of lethal weapons, Tarazov makes clear.

He is confident that Putin’s election result in Murmansk will be comparable with the rest of the country and that he will get «more than 50 percent».

Several big screens around the city display President Putin and urge Russians to “vote for a strong Russia.” However, most of the billboards on display are neutral posters and simply call on Russians to go to the polls. «Lets vote for president, lets vote for the future», they say.

On the streets of Murmansk, there have hardly been any campaign tents, flags or activist gatherings. On Tuesday afternoon, town dwellers walking down the Leninsky Prospekt, the main street in town, could run into only two campaigners. They were both elderly women campaigning for Grigory Yavlinsky, the veteran politician from liberal party Yaboko.

«We do not expect our candidate to get much support», says Nataliya Vladimirovna to the Barents Observer. «But we have to do what we can to work against this ruling regime», she underlines.

The latest figure from the Russian Public Opinion Research Center (VCIOM), shows that Yavlinsky has support from only about one percent of the country-wide electorate. A poll conducted on 12th March shows that 69 percent of the respondents intend to vote for Putin. Seven percent would vote for Communist Party leader Pavel Grudinin, five percent for LDPR leader Vladimir Zhirinovsky and two percent for Kseniya Sobchak.

VCIOM believes that voter turnout in the country as a whole will be about 65 percent. Few independent studies can contest those estimates. Independent pollster Levada Center has been declared a so-called «foreign agent» and is not allowed to conduct political opinion polls ahead of the vote.

The OSCE Office for Democratic Institutions and Human Rights now has a total of 420 short-term observers ready to pay close attention to voting procedures in the country. They follow a team of 13 international experts and 60 long-term observers, headed by Norwegian Jan Petersen.

In addition there are hundreds of Russian observers on site. Many of them are associated with Golos, an independent organisation which actively has been training election observers for many months.

Also Navalny’s people are ready to take on monitoring tasks.

According to Violeta Grudina, there will be about 200 of her volunteers only in Murmansk Oblast. They will be on site in all the 20 biggest cities in the region, Grudina says.

Many of them will face hardship.

«All over the country, the authorities are now detaining volunteers, fine them and arrest them. There are house searches, confiscations, the police is coming to people’s homes, they terrorise them at work, at their study places,» Grudina says to the Barents Observer.

«In my relatively short life, I can not remember anything like it.»

Support our independent, nonprofit journalism. For 15 years, the Barents Observer has provide serious, fact-based journalism and stories from the Barents region and the Arctic. Please help us continue to be a voice for freedom in the borderland to Russia. You can give a small support here