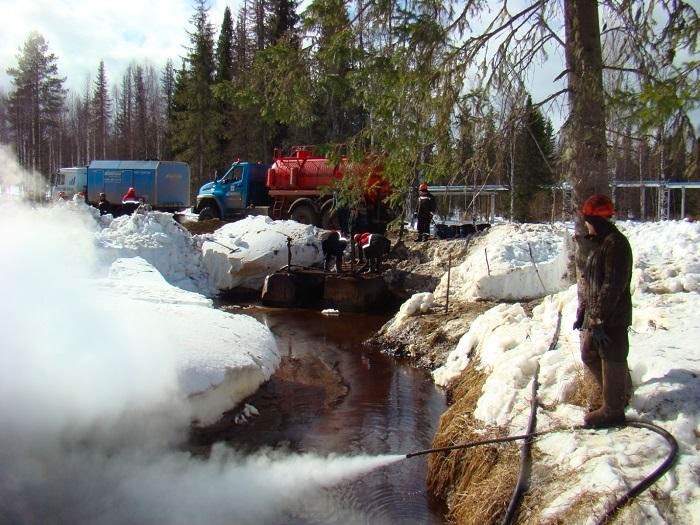 Spilled oil from one of Lukoil’s local pipelines is polluting the river of Maly Voivozh.
Read in Russian | Читать по-русски
By

It is almost standard procedure; as spring comes to the oil-rich Komi Republic, clean-up crews move out to handle spills. This time, oil ran into the small river of Maly Voivozh following loss of pressure in one of company Yareganeft’s pipelines, 7x7-journal reports.

The company is a subsidiary of Lukoil Komi, the biggest oil producer in the oil-rich Timan-Pechora region.

The site of the spill is located only few kilometers from the city of Ukhta.

Company personnel halted oil production at a local production well and soon managed to located the site of the spill. A team of 33 people and 12 units of machinery subsequently engaged in the clean-up operation, 7x7-journal reports.

It is not clear how much oil that spilled into the river, but environmental group Committee Save Pechora describes the volumes as «not big».

The consequences of the spill will be eliminated in the course of two days, local authorities in Ukhta said in a meeting this week.