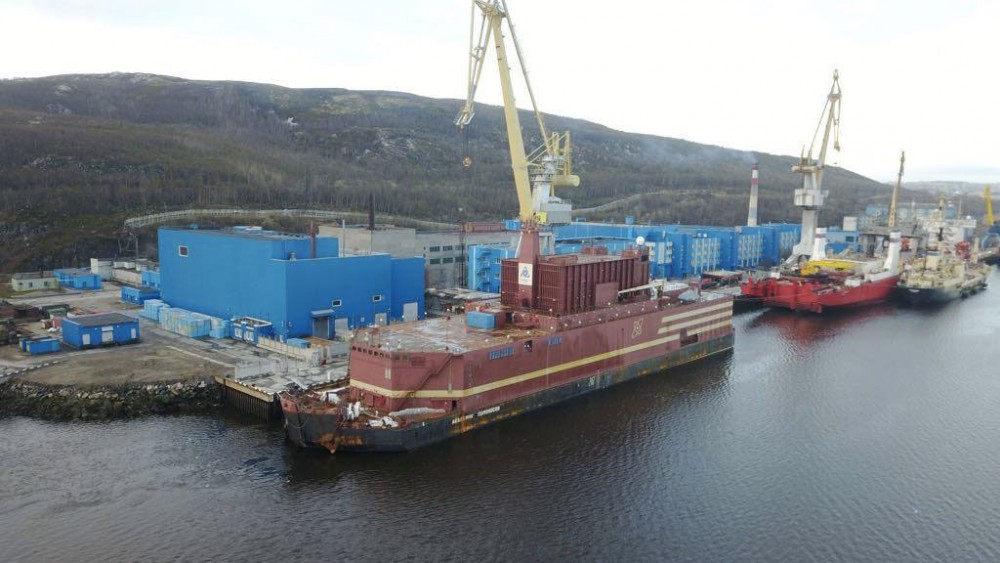 After a 4,000 km voyage from St. Petersburg, the floating nuclear power plant is moored on the banks of the Kola Bay.
Read in Russian | Читать по-русски
By

The world’s first nuclear power plant of its kind on Thursday arrived in Murmansk after 19 days at sea. Accompanied by tugs and support vessels «Spasatel Karaev», «Umka» and «Yasnyy», the barge with the reactors moored at the Atomflot base, just few kilometers from the Murmansk city center.

According to Rosatom General Director Aleksey Likhachev, the voyage had proceeded smoothly without any incidents. In a ceremony on Saturday, the leader of the federal nuclear power company underlined that the «Akademik Lomonosov» will be charged with nuclear fuel in the course of the next months.

The barge with the reactors is brand new and not yet in operation. Still, judging from the photos, it looks rusty and old.

«We have successfully towed the nuclear energy block without nuclear fuel to Murmansk and here we will put into life this unique mobile nuclear object, which has been built in close cooperation with many companies», Likhachev said in the ceremony, Rosatom informs.

On site were also regional leaders from Murmansk and Chukotka, as well as several directors from Rosatom, among them Rosatomflot leader Vyacheslav Ruksha.

In a comment, regional Deputy Governor Evgeny Nikora said he was proud to see the floating nuclear power plant in Murmansk.

After a year of testing at Atomflot, the power plant will be towed along the whole Russian Arctic coast to Pevek where it will be permanently based.

According to Rosatom, it is the State Marine Rescue Service which is responsible for the towing operations, both from St. Petersburg to Murmansk and from Murmansk to Pevek. Loading of nuclear fuel is planned to take place in the course of fall this year. After testing in the Kola Bay, the installation is to be towed to Pevek in the course of June 2019.

The «Akademik Lomonosov» has been under construction for more than 12 years. The building originally started at the Sevmash yard in Severodvinsk back in 2006. Then, the hull was moved to the Baltic Shipyard in St. Petersburg in 2009 because the yard by the White Sea had to concentrate on building warships and submarines. In 2011, the floating nuclear power plant became central in the bankruptcy proceedings against the Baltic Shipyard.