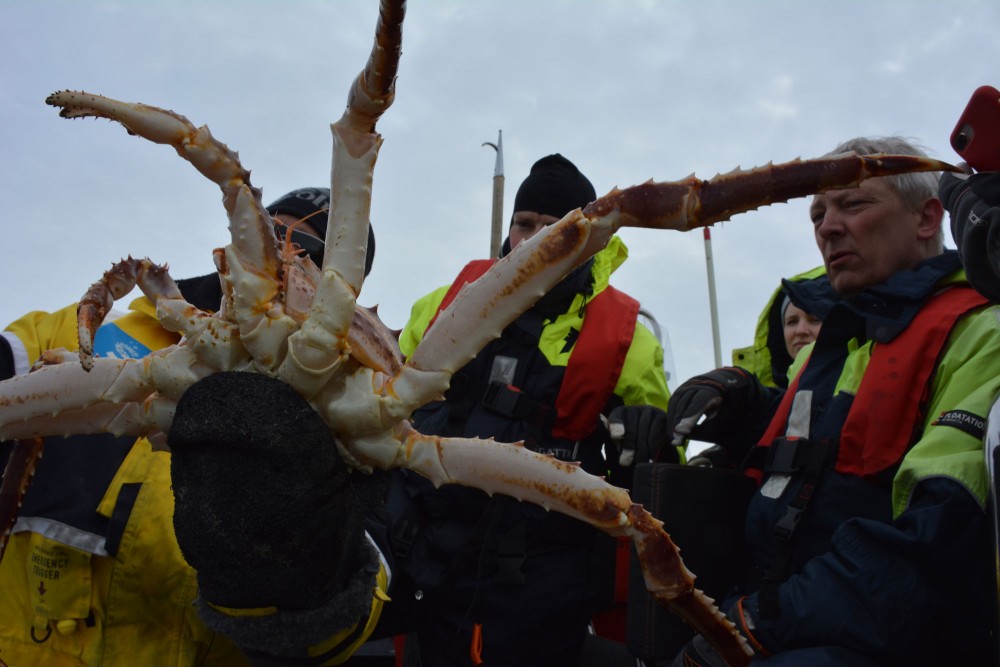 As the country prepares an overhaul of its lucrative crab quotas, Fishery Agency leader Ilya Shestyakov sends a signal to neighbouring Norway.
Read in Russian | Читать по-русски
By

Russian marine researchers will this year conduct a study of the king crab population in the Russian part of the Varanger Fjord, an inlet of the Barents Sea. And if the analysis shows that there is a threat to the crab, Russia will propose to Norway that it introduces catch regulations, Shestyakov makes clear to TASS.

While Russia has a moratorium on crab catch in the area, nearby Norway is annually fishing several hundred tons on its side of the border.

«We have to scientifically assess the rightfulness of the regulations in this coastal zone of the Varanger Fjord [and] if the analysis of the results confirms that it is necessary [to ban the crab fishing] then we have to make sure that the Norwegians introduce the same regulations,» Shestyakov told the news agency during the recent St. Petersrburg Economic Forum.

«I believe that this is a questions which we will discuss in 2018,» he added. The Fishery Agency is top responsible for Russia’s fisheries management.

The interview is posted also on the website of the Agency.

New quotas in the making

The signal from Shestyakov comes as the current Russian crab quota system is up for reform. Since 2008, crab fishing has been done with 10-year licenses distributed based on a so-called historical principle, that is in accordance with catch results from previous years.

In the proposed new system, the quota rights will cover a 15-year period, and up to half of them might be issued in auctions. That will significantly favour big and powerful companies, some of which previously have not been engaged in the fishing. Among them is the Russian Fishery Company (RFC), an enterprise controlled by businessmen Gleb Frank and Maksim Vorobyov.

According to newspaper Vedomosti, Vorobyov is the man behind a letter sent to President Putin in November 2017, which proposes the introduction of auctions in the crab quota system. Gleb Frank and Maksim Vorobyov are from before known for their ownership of the Russian Aquaculture, the company doing salmon farming on the coast of the Kola Peninsula.

The Fishery Agency in April this year started receiving bids from interested stakeholders. The new quotas will take effect in 2019. The quotas include several species, among them the king crab and snow crab.

The two well-connected businessmen Frank and Vorobyov will greatly benefit from a share of the lucrative fishing. Over the last years, the crab has become one of the most money-making marine products in the whole north, and both Russian and Norwegian quota holders sell their  tasty catch to buyers all over the world.

According to Ilya Shestyakov, Russian crab fishing in 2016 amounted to more than 74,000 tons, of which 57,000 tons was caught in the Russian Far East. And in 2017, quotas were increased to a record-high 83,600 tons, he told Forbes. In addition comes an unknown, but significant, volume of illegal catch.

A lion’s share of the catch is exported and revenues believed to amount to several hundred million USD.

Unlike the fish stocks in the Barents Sea, the crab is not managed by the Joint Norwegian-Russian Fishery Commission. The crab is defined as a so-called sedentary species, and consequently included in regulations applying to the continental shelf, the same laws that apply to offshore oil and gas resources.

In a comment to the Barents Observer, Jan H. Sundet, a marine researcher from the Norwegian Marine Research Institute, says the Norwegian and Russian sides are in close contact about their respective mapping of resources. However, he is not aware of the upcoming Russian study in the Varanger area.

«But it is reasonable that they want an overview of crab population on their side of the border,» he says.

Sundet explains that Norwegian authorities deliberately have kept king crab fishing on the Norwegian side of the border on a high level in a bid to limit spreading of the species to more western and southern areas.

He doubts that the Norwegian catch in the Varanger Fjord alone has much impact on the level of spreading on the Norwegian side, but admits that it clearly could affect stocks in the nearby Russian waters.

«After all, this is an area where we «share» the stocks,» he says.

While the Snow Crab is quickly expanding in Arctic waters, the Red King Crab is found mostly along the coast of the Russian Kola Peninsula and the Norwegian Finnmark coast. It originally comes from Pacific waters, but was introduced to the Barents Sea by Soviet researchers in the 1960s.

The Norwegian quotas on king crab are far less than on the Russian side. While the Russian quotas are up to 10,000 tons, the Norwegians are allowed to catch 1,750 tons of he-crabs in 2018. In addition comes a catch of 100 tons of she-crabs and a so-called tourist quota of 16 ton. The quota area covers the coastal areas from the Russian border to the waters off North Cape.

«The King Crab population in the area regulated by quotas has been relatively stable over several years and we therefore choose to continue a high level of catch,» State Secretary Veronica Pedersen Åsheim from the country’s Ministry of Trade, Industry and Fisheries said in a statement late 2017.