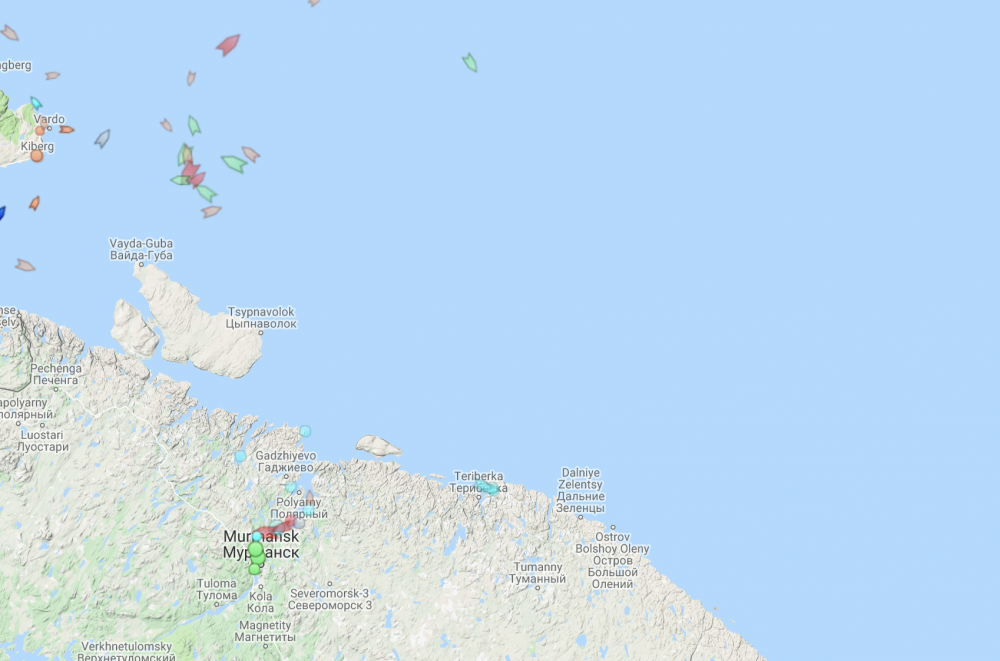 Screenshot of MarineTraffic Thursday shows how vessels are waiting northwest of the Fishermen Peninsula.

Civilian vessels with daily rates of up to $10,000 are lining up in the Norwegian-Russian maritime border area waiting for the Northern Fleet to stop shooting.
Read in Russian | Читать по-русски
By

About ten cargo and tanker ships are Thursday evening sailing back-and-forth in the waters outside the Varanger Peninsula and the Fishermen Peninsula. They all have Murmansk as destination according to their Automatic Identification System (AIS) info available via MarineTraffic.

There are no civilian vessels along the normally busy sailing lane between the Fishermen Peninsula and the inlet to the Kola Bay.

No ships are currently sailing out from the Kola Bay or the many port facilities in Murmansk.

Among the ships waiting in the border area, are two tankers. The largest is the over 100,000 tons «Venice A». On the map, the red ships are tankers, while the greenish ones are cargo vessels. Those with grey color are fishing vessels.

Russia’s Northern Fleet is into the second week of naval exercise, a military drill said by the Defense Ministry to be the largest in the Barents Sea over the last decade.

Military warships normally don’t sail with their transponders turned on, and especially not when they participate in an exercise. Therefore, none of the Northern Fleet’s ships in the area are visible via MarineTraffic’s site.

The Port Administration for Northwestern Russia, though, has issued warnings about where shootings take place in the Barents Sea. The site can tell that rocket and artillery shootings currently happen and give details for where and when it is not allowed for civilian ships to sail.

For good reasons, no ships want to sail into an area where live shootings take place. However, the current waiting cause troubles for the shipping companies since waiting for clearance to sail means disturbed sailing plans and extra costs. A large crude oil tanker costs some $10,000 to $12,000 per day to operate.

Daily rates for cargo ships are lower than tankers, but still, waiting is normally not much welcomed by captains that have pre-arranged schedules and port-calls to follow.

Shipping is expected to open again before Friday. The cruise ship “Breamar” left port in Murmansk before 20.00 Thursday evening and would be normal sailing time westbound be outside the Fishermen Peninsula by early Friday morning.