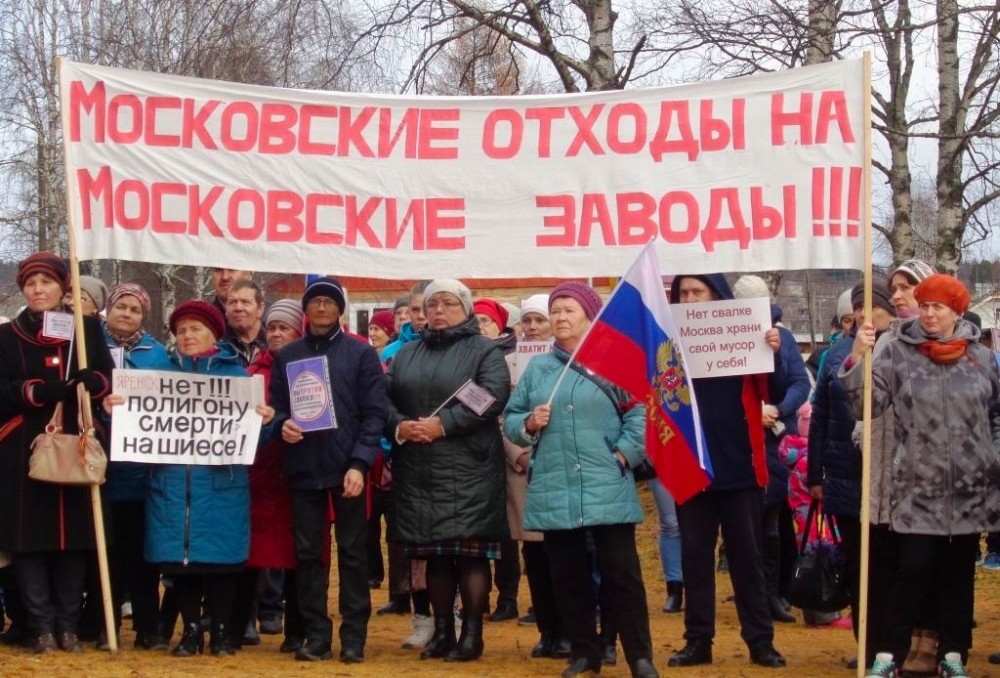 In the Arkhangelsk region, citizens are rallying against having to be a home for garbage from the capital

The Arkhangelsk region is angrily protesting against a dump under construction in the Lensky District. A 5,000 hectare landfill intended to hold municipal solid waste from Moscow is being built near the Shies station and the people of the region don’t want it. Last Saturday, 200 people rallied in the city of Severodvinsk. The day after, another 50 more organized a picket in the regional center. An estimated crowd of 700 people gathered in the town of Yarensk. They were also on the streets in Syktyvkar and voicing opposition in the neighboring Komi Republic as the dump will actually be located on the border of both regions.

The Novaya Gazeta has already reported about how solid household wastes will be transported from Moscow. The company Technopark is running the project that plans for a round-the-clock operation that will accept and process 55 to 90 railway cars of Moscow garbage per day. It includes both recycling and garbage disposal. The dump will be in operation for the next 20 years with a planned capacity of about half a million tons. This is about 6% Moscow’s total garbage.

The scandal initially began when locals observed unlicensed crews cutting down trees near the railroad station in Shies. At first, the authorities denied reports of any plans to set up a landfill, claiming that they were only landscaping for a building materials factory. A second story was that it would only be a regional waste processing plant. Then the real story broke and the protests began. No one wants a Moscow garbage dump here.

Outwardly acknowledging public opinion before the September 9 elections, Igor Orlov, Governor of the Arkhangelsk Region, firmly claimed that there would be no “Moscow dump”. But on October 18, the investment project was nonetheless officially presented at a meeting of the regional investment policy commission and the commission supported the project as a priority. And no wonder. According to RBC, the investment promises to bring 10 billion rubles (about 135 million Euro) to the regional budget. And the next day at a discussion focusing on Regional Development Strategy until 2035, Yevgeny Fomenko, the deputy chairman of the regional government, said that the pilot project would, if successful, be a model for other regions. He accused protestors of being provocateurs.

The planned Ecological Industrial Park in Shies will work in conjunction with treatment plants to be commissioned in 2018–2020 in Lyubertsy. The garbage will be compressed into bricks there and then sent by rail to Shies where the briquettes will be put to rest in pits.

In July Russian Railways leased the land near Shies to Technopark LLC, a subsidiary of Moscow’s state run “Automobile Roads” company for 60 years. The fact that the land was run by Russian Railways, and not the municipality, made it possible to start work in the summer without any notification to the local authorities. In fact, regional authorities were apparently completely unaware of any such project until about a week after construction began. Things started moving when residents of the Urdom settlement raised questions about why unlicensed Moscow landscaping teams were cutting down trees. “Clean Urdom” activists began collecting signatures against the landfill immediately.

The Urdoma Council of Deputies demanded that Governor Orlov stop the work. They were joined by Koryazhma city settlement deputies. A resident of the village Irta raised the first picket sign on August 23. By that time, Deputy Prime Minister Fomenko had already stated that the deforestation for the landfill was being conducted illegally. And about a month later, the police opened a criminal case.

There have been official protests as well. Lensky district Deputies proposed a referendum over the landfill though the district prosecutor’s office eventually declared the referendum illegal. Apparently decisions regarding importing “non-resident” garbage belongs to those in charge of the specific land (the railroad) and not the region. Yevgeny Palkin, a State Duma deputy from the Arkhangelsk region is also in opposition, stating that the dump will not bring any investment prospects to the region but will simply turn the Lensky district into an all-Russian garbage dump. Irina Chirkova, another Arkhangelsk deputy announced a bill banning reception of any waste from other regions.

And to be sure, this project does have serious environmental issues at stake. The area around the station is marshy for 200 km with numerous rivers and streams. A group of scientists led by Sergey Plyusnin, a senior Ecology Department lecturer at Syktyvkar State University, have stated that the nature of the land they are planning to build on is inappropriate for the construction of waste-related facilities. They point out that there are several protected natural areas near the Shies station which would be in danger of contamination. In particular, there are three reserves, one of which is only 30 km from the planned site. There are protected species of flora and fauna and the scientists have written that pollution from the landfill could seep into into the watercourses of small rivers which would threaten the water and coastal ecosystems of the lower Vychegda and the Northern Dvina section below the city of Kotlas.

And of course, the dump also poses air pollution threats to the Ust-Vym, Knyazhpogostsky, Syktyvdinsky and Sysolsky districts of the Komi Republic as well as the south-eastern districts of the Arkhangelsk region.

But when the activists demanded to see the necessary ecologic studies that Technopark LLC had done in preparation for the project, no traces of any ecological expertise was to be found. Instead, the Republic of Komi Ministry of Environment has answered that that people simply should wait and see what happens. They suggest that as of the moment, there is no reason to worry because only “survey work” is going on in Shies.

But to the residents of the Arkhangelsk region, the mood is serious. People attend the rallies in villages with homemade posters saying “We don’t want to be a Moscow garbage dump” and “Moscow, we are people too!” The government calls such people provocateurs and demands that importing waste is a profitable business for the region. Participants in the rally in Yarensk drafted and sent a resolution to the Kremlin, the government of the Russian Federation as well as the executive and legislative authorities of the region. There are demands to immediately stop work in Shies, to abandon the “priority project” and to legally prohibit the importation of ​​outside garbage into the area. The list of demands also includes  governor Orlov’s immediate resignation as well.

Autumn is here and governors fall