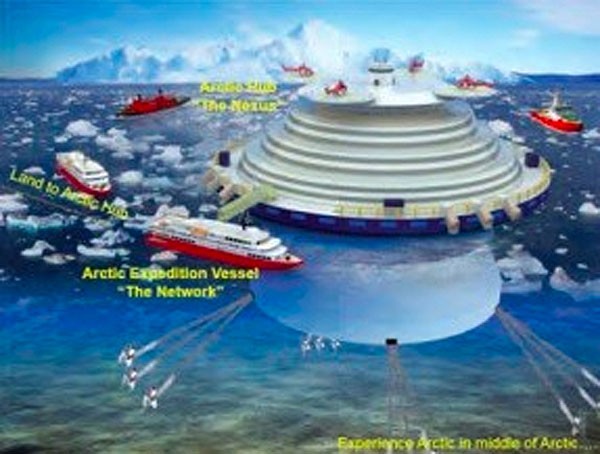 The "Arctic City" as designed by Singapore developers. Illustration: company publication by Keppelom.com

Latest buzz in Arctic tourism is a floating city

«People want to visit new places and experience something different,» says Aziz Merchant. He is Executive Director of the Keppel Offshore & Marine Technology Centre, a unit under the powerful Keppel Group, and participated in this week’s Arctic Frontiers in Tromsø, Norway.

«From the Asian perspective, tourists want new challenges, they want to explore areas that have not been explored before. Like with space tourism,» Merchant said in an address delivered at the conference.

But Merchant is absolutely serious. And he has the backing of one of the biggest marine engineering, property and investments companies in the world. The Singapore-based Keppel Corporation has more than 30 thousand employees working in a number of powerful subsidiary companies. Among them is the Keppel Offshore and Marine, the yard and ship design company that is world renown for its building of oil and gas rigs and platforms.

Over the last years, the company has also built a series of top ice-class vessels.

According to Merchant, the building of a floating Arctic hub will enable the tourism industry to attract big number of people to the high Arctic without affecting vulnerable local settlements and indigenous peoples. It will be environmentally friendly, he argues, because it «minimises the impact on the fragile Arctic.»

«If you have Arctic vessels visiting Arctic settlements then it affects them. One way to avoid this is to have an Arctic floating city away from the coastline where tourists can come to the Arctic and enjoy the Arctic surroundings without visiting onshore,» he said.

Critics argue that the project would be a grave violation of high ethical standards needed for the Arctic, but the developers from the Keppel Offshore and Marine see it otherwise

«We simply see the aspirations of people today,» Aziz Merchant underlined in a panel discussion.

The Keppel Corporation first presented the project in 2016 and has since been marketing the idea. Company representative Merchant underlines that he «looks forward to cooperating with Arctic states and companies to test the new innovations.»

It is not clear exactly where would be the desired location of the Arctic facilities, and the company representative declined to provide additional information when approached by the Barents Observer.

The building of artificial islands is nothing new in itself. And designers and developers from all over the world work with concepts for floating cities as a possible solution to the expected effects of climate change and land scarcity. Aziz Merchant is a key person in Keppel working on such concepts for the Arctic. He is himself an Adjunct Professor at the National University of Singapore and has written a number of scientific works, some of which are published in the Technology Review, a publication issued by Keppel itself. The 2017 edition of the Review outlines several of his Arctic projects.

Singapore has over the past decade significantly enhanced its interests in the Arctic. In 2013, it obtained observer status in the Arctic Council. According to Aziz Merchant, new Arctic technology and innovation can serve as his country’s contribution to the council’s work.

Keppel is today actively engaged in the development of new Arctic vessels and installations, including search and rescue facilities for Arctic areas. Among the projected installations are multipurpose Arctic search and rescue hubs located among the Arctic coast and able to provide helicopter assistance when need for rescue and evacuation of personnel.

Cruise tourists are about to break the ice