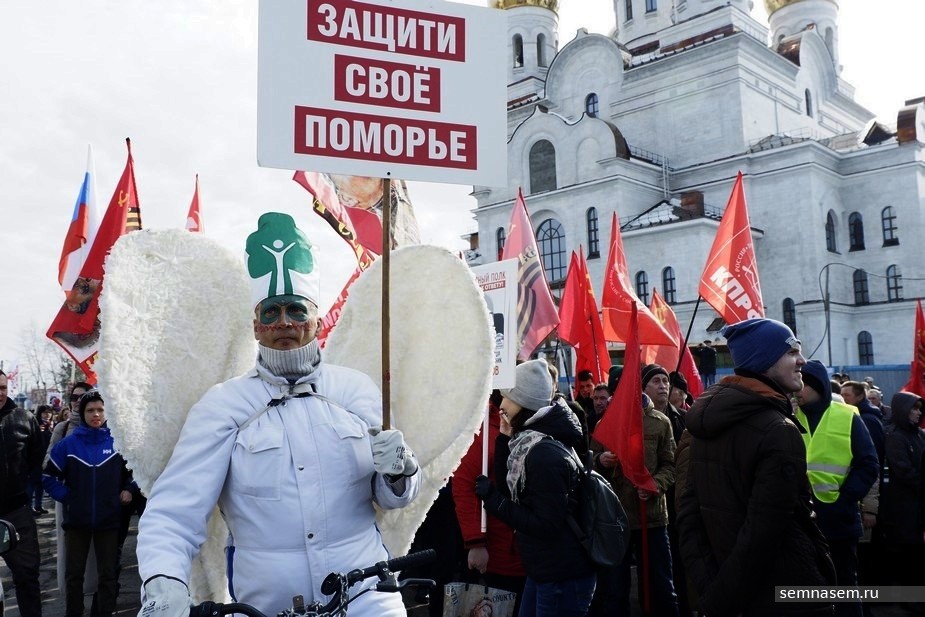 Our protest will not have an end, people say as rage builds up against a large dump for Moscow household waste in Arkhangelsk region.
Read in Russian | Читать по-русски
By

The building of the waste management facility in Shies, the remote forest area south in Arkhangelsk region, has angered large parts of the Russian north.

On Sunday the 7th April, people again took to the streets to protest the project. According to journalists on site, several thousand people assembled in Arkhangelsk, Severodvinsk and Syktyvkar.

In Arkhangelsk, the rally had not been approved by local authorities and police stood by ready to intervene as the protesters moved towards the central square and the site of the regional government buildings.

The demonstrators set up a tent on site, but that was quickly torn down by police. Young people started to sing. And a resolution was adopted that demanded the resignation of regional Governor Igor Orlov, 7x7-journal reports.

The organisers of the rally also announced that the protests «will not have an end.»

The new garbage site in Shies will include large volumes of wastes that will be sent thousands of kilometres by railway from the capital. It has enraged the locals that feel that they are being ignored and stepped on by an arrogant and rich Moscow.

Reportedly, the new dump will handle about 6 percent of the total volume of household waste produced in the capital. And it is made for operations in a 20-years time span.

Revenues for the regional budget is said to include up to 10 billion rubles (€132 millon) in compensation, and also generate tax revenues of more than 900 million rubles (€12 million) over a six-year period.

Still, the protester that take to the streets in the regions of Arkhangelsk and Komi have wide-ranging support among their fellow northerners.

It has put regional Governor Orlov in an awkward position. In a statement issued after Sunday’s protests, Orlov calls for «constructive dialogue» and makes clear that the police is looking into the developments.

«It is unacceptable to have dialogue with help of unsanctioned rallies that put the life of local citizens in jeopardy and disturb public order,» Orlov says and underlines that the building of the dump site will be subject to public control and monitoring by regional environmental organisations.

On the day after the rally, police detained several of its organizers. Among them is Dmitry Sekushin, ODVInfo reports. Also the editor of newspaper ND29.ru was taken by police.

Several environmental experts have already critically commented on the building of the dump. They argue that the site is located in wetlands and that contamination of the ground could lead to widespread damage in the whole region.

Among the critical voices is the regional branch of the federal water resource agency. The building of the garbage site threatens to pollute local rivers and violate sanitary norms, agency representatives told 7x7-journal.