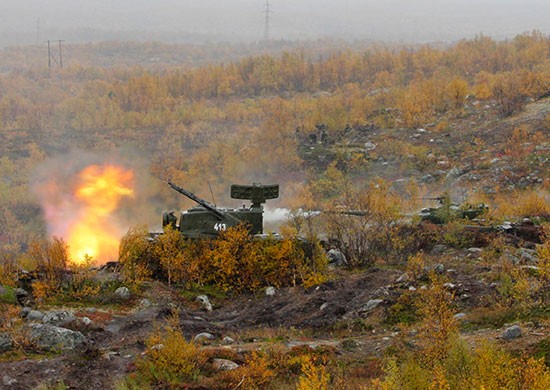 Russian soldiers were put on alert on Wednesday and subsequently moved towards training fields in the Pechenga area.
Read in Russian | Читать по-русски
By

There are sounds of bang and blow in the borderlands between Russia and Norway as more than 2,000 Russian troops are engaged in a major tactical exercise in the area.

Involved are also more than 400 pieces of military machinery and weaponry, the Northern Fleet informs.

Among the military hardware applied is the new tanks T-80BVM. It has a 125 mm smoothbore gun with a range of up to 3,000 meters. Secondary armament consists of a coaxial 7,62 mm machine gun and roof-mounted 12,7 mm machine gun.

The T-80BVM is an upgraded version of the T-80BV main battle tank. It was first publicly revealed in 2017. It is considered the tank best suited for operations in the high north.

The Russian Armed Forces early this year announced that more than 20 new T-80BVMs will in the course of 2019 be delivered to the tank brigades located in the Kola Peninsula.

In addition to the new tanks, the troops will druing this week’s exercise apply Grad rocket launchers, the Gvozdika self-propelled howitzer, as well as unmanned aviation.

It is the 200th motorized infantry brigade that is involved in the the training.  It has its command point in the settlement of Pechenga and operates bases in Luostary only about 10 km from the border to Norway.

Nearby is also the 61st naval infantry brigade in Sputnik.

According to the Northern Fleet, the soldiers involved in the training will improve their skills in camouflage and joint action with big distance between the soldiers.

A key objective is to work with systems for troops management in situations with quickly changing battle scenerios.

It is not uncommon that the Northern Fleet does extensive training in the Pechenga area. There are big military bases in the area and a major number of troops and armament.