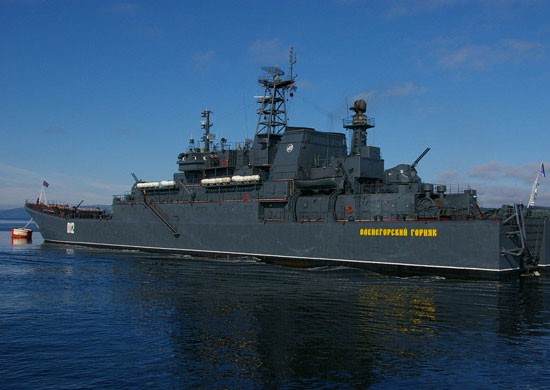 After 5 years of repairs and upgrade, the «Olenegorsky Gornyak» is on its way back to the waters of the Kola Bay.
Read in Russian | Читать по-русски
By

The 112 meter long ship has been docked for upgrades since 2014, first in a yard in Murmansk and later in the Russian Baltic city of Baltiisk. The ship has now completed sea trials and the crew is getting ready to set course for the north, news site Olenegorsk51 reports.

According to the Russian Navy, the ship has undergone a series of upgrades of its hulls, life support systems, mechanical units, as well as navigation and communications systems.

The «Olenegorsky Gornyak» was built in 1974 in Gdansk, Poland, and is the sister ship of the «Kondopoga» and «Aleksandr Otrakovsky», two of the Northern Fleet’s other landing ships.

The vessel in 2013 took part in a voyage to the remote Arctic archipelago of New Siberian Islands. In 2014, it accompanied aircraft carrier «Admiral Kuznetsov» to the Mediterranean as part of Russia’s military offensive in Syria.