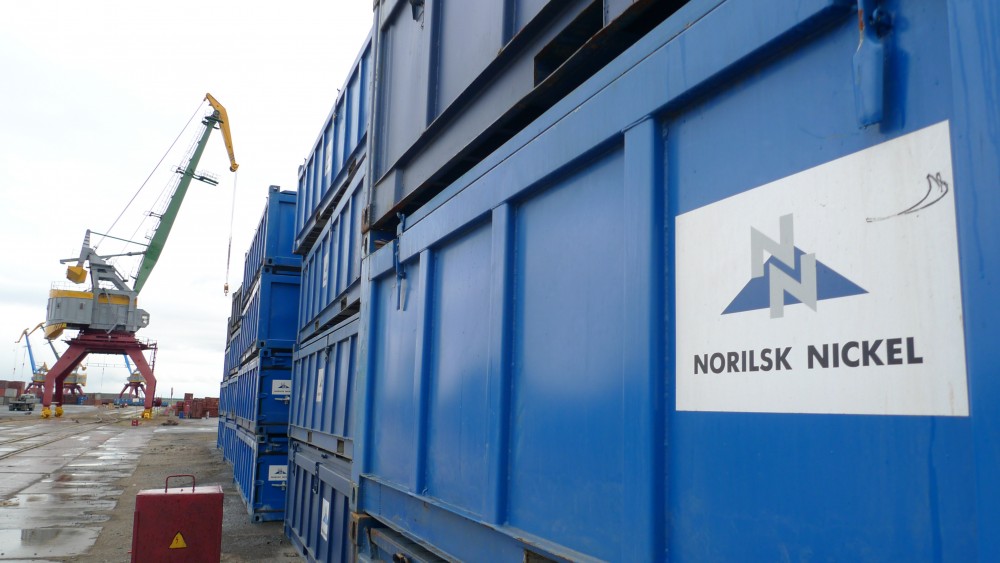 Containers with metals ready for shipping from the port of Dudinka, Taimyr Peninsula. Photo: Thomas Nilsen

The company says it can supply enough battery packs to reduce global CO2 emissions by 50-100 million tonnes over the electric vehicles life cycle.
Read in Russian | Читать по-русски
By

10-years strategic ambition for mining on the Arctic tundra is set to 30 million tonnes per year, the Russian metal-giant said at its annual capital markets day.

Nornickel, describing itself as «the world’s best Tier-1 mining resource», says its unique commodity basket gives the company the best position to support the world’s shift to clean energy mobility.

The announcement to boost production of core metals for battery production comes as the International Energy Agency (IEA) estimates sales of electric vehicles (EV) to reach 44 million annually by 2030, up from about 2 million in 2018.

Both nickel and copper are core metals in batteries for electric cars, buses and ships.

«We believe that we could supply enough nickel to produce 3.5 to 5.5 million nickel-rich EV battery packs, which could reduce global CO2 emissions by 50-100 million tonnes over the EV’s life cycle,» the capital market days announcement reads.

The two mining areas where output will see a boost are the Talnakh deposit and the recently approved South Cluster mining project.

The mining town of Talnakh is located some 20 kilometers north of Norilsk.

After recently closing down the oldest nickel smelter in Norilsk, production of pure nickel metal for the mining and matte melting was transferred to Monchegorsk on Russia’s Kola Peninsula as well as to the company’s Harjavalta refinery in Finland.

Although Nornickel has started a large-scale modernization of its mining, processing and smelter industry in the very north of Russia, the town of Norilsk was earlier this year places as No. 1 on the list of the world’s worst sulfur dioxide (SO2) polluters.

1,9 million tons of SO2 from the chimneys in Norilsk were blowing over the Arctic tundra on the Taimyr Peninsula in 2018, according to an estimate in a NASA satellite study, as previously reported by the Barents Observer.