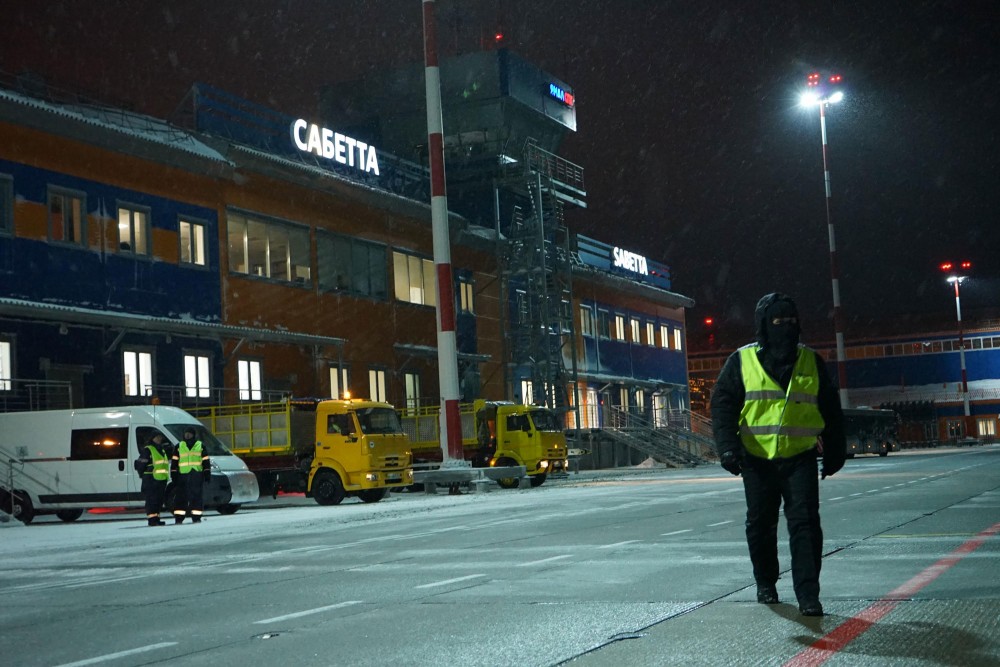 The airport of Sabetta has now been closed for regular flights. Archive photo: Atle Staalesen

Fearing spread of the coronavirus, Russian companies isolate large construction sites and industrial towns to the outside world.
Read in Russian | Читать по-русски
By

Work must go on, Russian companies argue as they isolate several large industrial sites in the Arctic.  The result is that many thousand workers are stranded on site, unable to get back to their homes in central parts of the country any time soon.

Among the construction sites that now have been closed to the outside world is the Belokamenka project outside Murmansk. Up to 9,000 workers are reported to be isolated on site by project developer Novatek in a measure aimed at limiting the spread of the coronavirus among workers.

According to MMK.News, entry and exit to the construction site can now be made only with special permission, and shift workers coming to the area are placed in quarantine in adjacent facilities for ten days.

The workers, most of them from other Russian regions, will work on site for up to two months before they are replaced by new people.

The new regulations have been imposed by regional authorities in Murmansk, MMK reports.

Until recently, also a big number of Chinese workers were employed in the project. However, most of them were sent back to China early in the year, Governor Andrey Chibis told SeverPost.

The Belokamenka project includes the building of a plant for construction of LNG production platforms. Time limits are short and the plant is get the first platform ready for operations in the Gulf of Ob by year 2022.

Stuck on the tundra

Similar isolation of industrial sites are made in other parts of the country’s north. In Sabetta, the industrial hub in the Yamal Peninsula, more than 20,000 people are stuck as flight connections have been halted.

Judging from flight information and the local airport, there are no longer any regular commercial flights to and from the remote company town. On social media, locals express great frustration that they can not make it out of the desolate Arctic peninsula.

Regional Governor Dmitry Artyukhov confirms that a number of precautionary measures are taken against the coronavirus. Among them is the prolongation of the current work shifts for people working in the regional petroleum projects, newspaper Rossiiskaya Gazeta reports.

Also people in Gazprom Neft’s Novy Port oil project are told to extend their work stays in the remote Yamal tundra. According to the company, all work stays in remote field sites are extended to 60 days.

All flights to the area have been cancelled, news site muksun.fm reports. The Novy Port is among the biggest oil fields in the Russian Arctic. In 2019, the field delivered 7,7 million tons, Gazprom Neft informs.

The workers in Russia’s remote Arctic oil and gas projects come from all over the country and are flown in and out on commuter basis. The remote energy fields are of crucial importance for Russia and provide for a key share of export revenues.