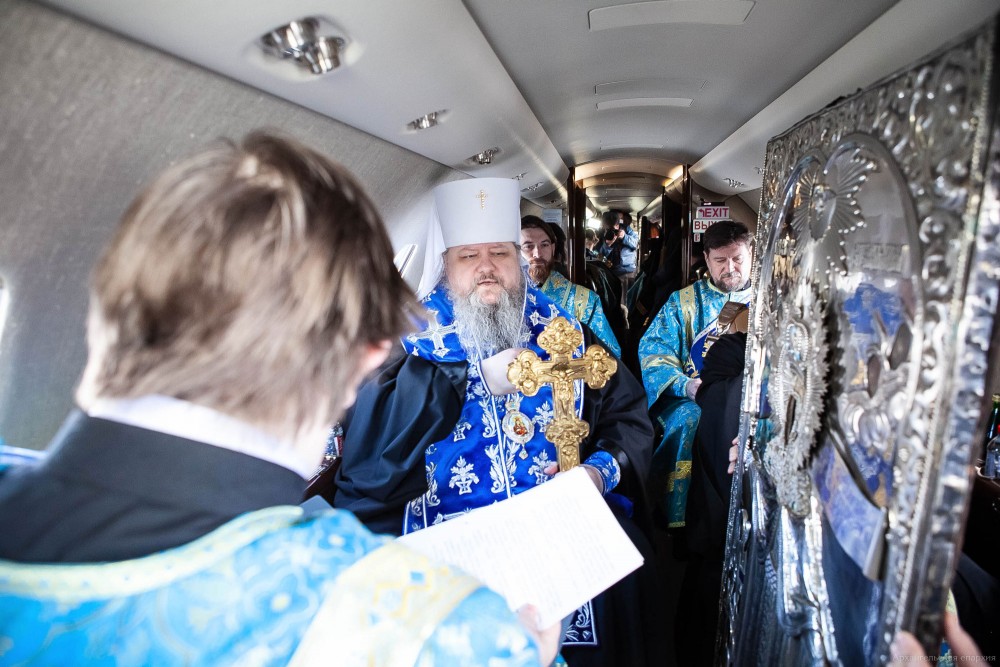 Metropolitan Kornily of Arkhangelsk borrows jet from local business tycoon in an anti-corona flight across his diocese. Photo: press service of Arkhangelsk diocese

Metropolitan Kornily of Arkhangelsk brought his most precious relics on board a flight that was aimed at bringing holy grace to a troubled land.
Read in Russian | Читать по-русски
By

Many of the church houses of the Russian Orthodox Church have been forced to close and churchgoers encouraged to stay home. That however has not stopped priests and clergymen from reaching out to their parishes.

All over the country, representatives of the church are making efforts to carry out divine duties. Sometimes in extraordinary ways.

Patriarch Kirill himself set the standards when he on the 3rd of April brought his icon of Virgin Mary of Tenderness with him on a car ride around Moscow. Before departure, the prelate called on his believers in home-quarantine to engage in joint prayers against “this malicious plague”.

But Metropolitan Kornily of Arkhangelsk was no less inventive. On the 2nd of April, the top cleric in the north Russian region borrowed a shiny two-engine jet from local businessman Vladimir Butorin and flew all across the vast area of his diocese, a territory bigger than France.

On board were several of the metropolitan’s main clergymen and holy hymns were read aloud as the aircraft speeded over the Arkhangelsk region. They were also reading prayers against the plague, the diocese informs.

In their hands, the metropolitan and his assistants carried a holy cross, an icon of the Mother of the Redeemer, as well as pictures of Archangel Michael and St.Nicholas the Wonderworker.

Arkhangelsk region is increasingly troubled by the coronavirus. By 6th April, a total of 14 cases had been registered in the region.

The situation is more serious in the neighboring region of Komi, where the official number of cases by that same day amounted to 90. That is the third highest number of cases in the whole country.

Also in Komi, Orthodox priests have taken exceptional efforts to counter the closure of their church houses. In regional capital Syktyvar, a priest was filmed as he was driving around in town and spreading holy waters on the desolate streets.

The Russian Orthodox Church has closed most of its church buildings for vistors. That does not stop this priest from Syktyvkar from keeping up his service. Video by 7x7-journal

The church is also starting to feel effects of the virus among its own clergy. The first confirmed cases of infection among priests were registered this weekend.

By 6th April a total of 6,346 cases of coronavirus had been registered in Russia.