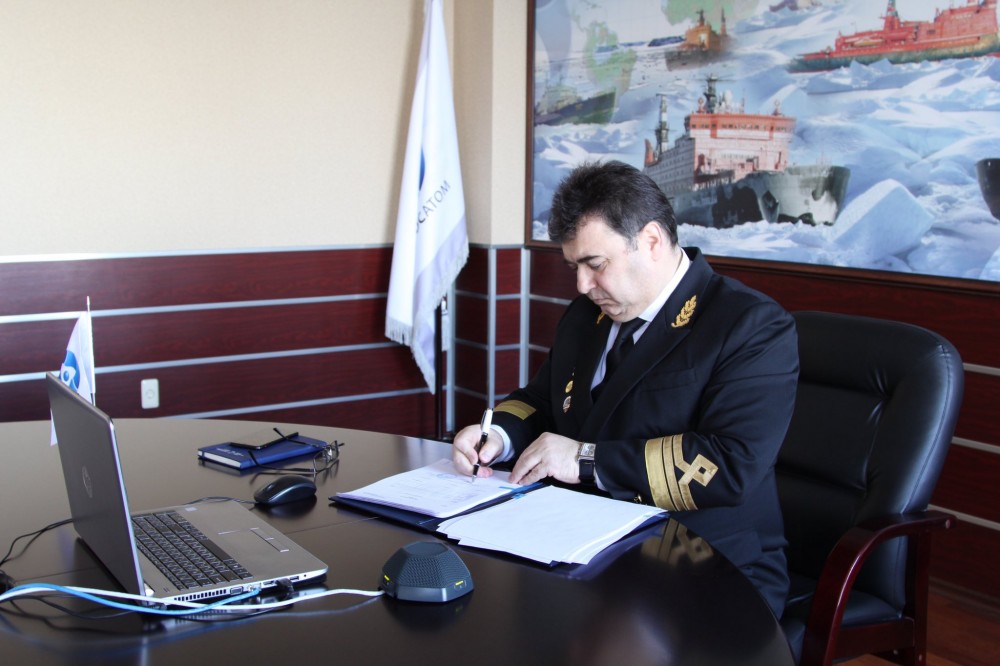 Russia gives go-ahead for the first Lider-class icebreaker amid big uncertainties in global trade, shipping and potential for huge income from Arctic oil and gas.
Read in Russian | Читать по-русски
By

With the coronavirus outbreak still not under control, big ceremonies, and long-distance travel have to be avoided. So also when the contract for building the largest and most powerful nuclear icebreaker is to be signed.

On April 23rd, a video-link for the remote signing of the contract by the buyer and the builder was established between Murmansk and Vladivostok.

Murmansk is homeport for Russia’s powerful fleet of nuclear-powered icebreakers while the shipyard to build the first Lider-class, Zvezda, is located in Bolshoi Kamen near Vladivostok in the Far East.

“Today, an important step is taken in the history of the nuclear icebreaker fleet,” said Mustafa Kashka, Director of Atomflot in Murmansk in a pre-prepared statement posted by Rosatom, Russia’s state corporation for nuclear energy.

Kashka added that the new icebreaker “will guarantee safe and regular operations in the eastern region of the Arctic by providing year-round navigations along the Northern Sea Route.”

According to the terms of the contract, the icebreaker is planned to be commissioned in 2027.

The Lider-class will be an icebreaker of a kind the world has never seen.

Equipped with two RITM-400 type nuclear reactors, the total power will be 120 MW which will allow the icebreaker to crush through ice thicker than four meters.

The Lider-class icebreaker will have a displacement of 55,000 tons, about twice the weight of the current Arktika-class icebreakers like the «Yamal» and «50 Let Pobedy».

Lider is 13,5 meters wider than the next generation icebreakers of the 22220 class currently under testing and construction at the yard in St. Petersburg, with the first, the “Arktika” to be delivered later this year or next year to Rosatomflot.

Crushing the ice along the most difficult part of the Northern Sea Route, from the Laptev Sea and eastbound, the Lider icebreakers can open a much wider ship lane through the ice for big vessels, including the largest LNG tankers sailing east from the Yamal region towards the Pacific region.

It was former prime minister, Dmitry Medvedev, that in January secured 127 billion rubles (€1,85 billion) in state funding for building the first Lider-class icebreaker.

Two more of the giant icebreakers are planned with deliveries in 2030 and 2032. Funding for those two is yet to be granted.

Rosatom has produced this promotion video of the icebreaker.