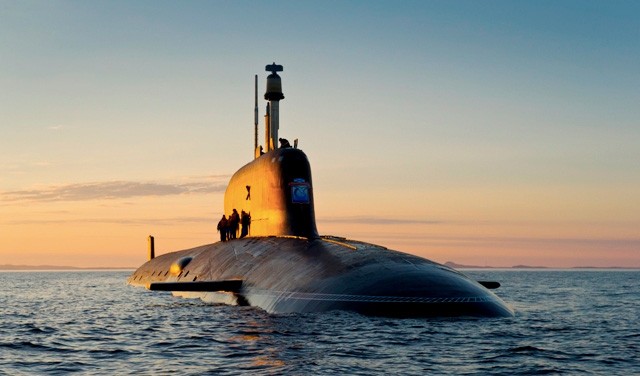 The Russian Navy will ultimately have a total of nine Yasen-class submarines. Photo: Sevmash

The Yasen-M class vessels are the most expensive and technically advanced in the Russian Navy.
Read in Russian | Читать по-русски
By

It was a great day for the Russian Navy. On the 20th July, three shipyards laid down the keel of six new vessels. Among them were the “Voronezh” and the “Vladivostok”, two Yasen-M class submarines.

The subs are the 8th and 9th vessels of the Yasen class. Like their sister ships, the “Voronezh” and the “Vladivostok” are built at the Sevmash yard in Severodvinsk, northern Russia.

“The Navy has always staunchly protected the borders of Russia [and] in our days it plays an exclusively important role in providing Russian security, it is a firm guardian of national interests, helps support the strategic balance and world stability,” President Vladimir Putin said in a speech delivered at the Zaliv Yard in the Crimea.

According to the President, Russia has over the last eight years built as many as 200 new naval vessels. By year 2027, at least 70 percent of the country’s Navy’s will be modern ships, he assured.

The “Voronezh” and “Vladivostok” are believed to be ready for hand-over to the Navy in year 2027 and 2028. They will most likely serve in the Northern Fleet and Pacific Fleet respectively. Both vessels will be equipped with the Kalibr-M cruise missiles, as well as the Tsirkon hypersonic missile.

“Today, we are laying down the keel of ships with hypersonic weapons, on which the future of the Russian submarine fleet leans,” General Director of Sevmash Mikhail Budnichenko said in the ceremony.

From before, Russia has one Yasen-class sub in operation, the “Severodvinsk”. The first modernized Yasen-M class vessel, the “Kazan”, is currently undergoing sea trials, while the “Novosibirsk”, “Krasnoyarsk”, “Arkhangelsk”, “Perm” and “Ulyanovsk” are in various phases of construction.

Five of the new subs will serve in the Northern Fleet. They will most likely be based in Zapadnaya Litsa on the Barents Sea coast, less than 100 km from the border to Norway.

The Russian Defense Ministry originally planned to build seven Yasen submarines, all of them to be delivered to the Navy by year 2015. However, in early 2019 Deputy Defense Minister Alexei Krivoruchko announced that another two vessel would be built.

Yasen and Yasen-M class are the first 4th generation multi-purpose submarines for the Russian navy. They are said to be both the most expensive and technically advanced in the Russian Navy.

The city that builds Russia's nuclear submarines now has more than 2,000 COVID-19 cases