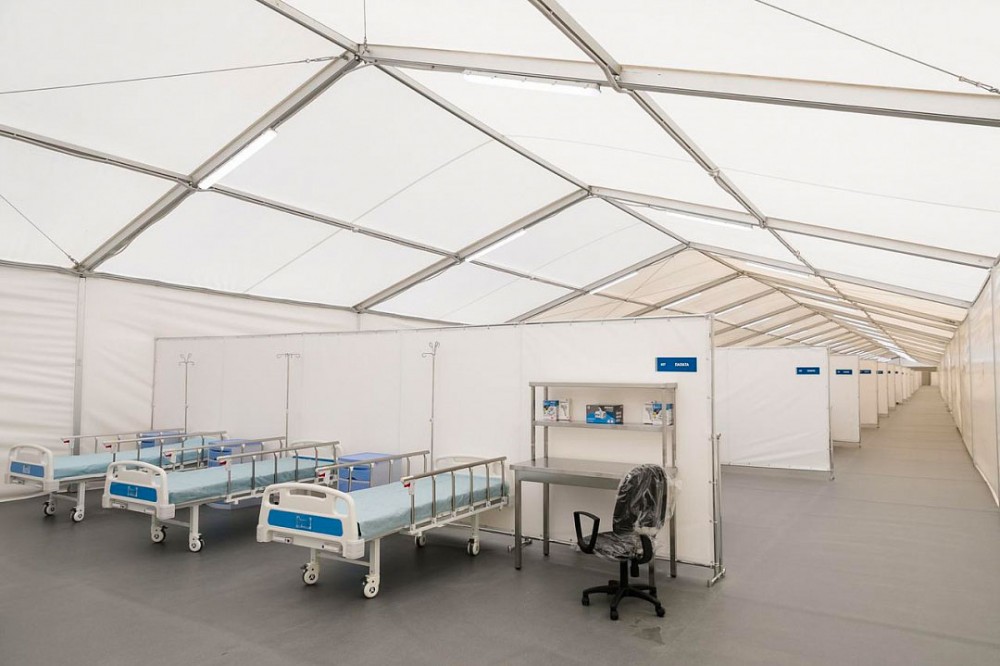 A billion rubles for a tent

A mobile hospital for the care of coronavirus patients in Murmansk fails to get built.

The mobile hospital, built near Murmansk for a billion rubles (€11 million) has never received a single patient.  It has been sent here in sections. In September, the heads of the municipalities received letters signed by the regional minister of construction, Vladislav Sandursky, in which they have been invited to “consider and report on what their plan is for the use of this structure and its elements for the needs of the municipality ”. The document, which Novaya Gazeta has at its disposal, is accompanied by a plan for a hospital with 700 beds. Moreover, when the ministry showed the hospital to reporters, it was reported that the hospital would become a part of the Murmansk Clinical Multidisciplinary Center. They were also told that personnel were being recruited.

Not unexpectedly however, the construction of the hospital became the scandal of the year in the Murmansk region. The PIK Group of Companies, PJSC, the largest real estate and home-builder company in Russia got the contract to build it,  for a sizable chunk of the federal budget. The deal was carried out through the Ministry of Emergency Situations and the regional Ministry of Construction after a public request from Governor Andrei Chibis which was addressed to Vladimir Putin. True, the president had given his instructions to build a mobile infirmary in the village of Belokamenka. True, it had been specified to be located at the Novatek construction site where more than two thousand workers fell ill with covid in the spring. And true, a 9000 square meter tent appeared in the village of Murmashi, about 50 km away. But yes, it was just a tent. It turned out that for a billion of state money, something was built from a banner fabric on an aluminum profile, and the materials used were the most flammable, the most toxic and with the highest smoke-generating ability. And it looks like the frame for a giant greenhouse.

Why has the construction stopped? Because on May 26, 10 days before the official presentation of the hospital, which is already ready for operation, the regional department of the Ministry of Emergency Situations declared that the design requirements did not comply with the regulations in the construction sector.

The use of this fabric for a structure of such an area automatically excluded the possibility of people (patients and staff) being there, storing explosives (for example, oxygen) or the operation of electrical equipment. This despite the fact that the hospital had promised to have available 30 ventilators, a tomograph, oxygen and a staff of 110 who would provide round-the-clock care for 700 patients.

When the scandal became public, Governor Chibis assured everybody that the whole point was in the innovative and even experimental nature of the construction. He also assured everyone that all of the issues that had been raised by the regional department of the Ministry of Emergencies had been removed in negotiations at the federal level.

So first, it was a hospital, then it became an experiment in innovation and then on  May 20, the same Chibis said that the hospital would not accept patients. It would be dismantled in September.

So the voices of the experts had not been heard. It had been vigorously suggested in the first weeks of the pandemic that a large hospital needed to be set up. The name was supposed to be Murmansk “Sevryba” and it’s job was to care for coronavirus patients to prevent the spread of the disease to other medical institutions.  They said it would cost about a billion rubles to bring “Sevryba” into good condition. The investment was long-term and the region would receive a needed hospital with 700 beds with modern equipment. Instead, we received a huge inappropriate building that generates debt. They preferred to invest the money in a “tent”.

So, the mobile hospital Chibis promised us is empty. At the request of the governor, 12 firefighters are permanently on duty near it. And as expected, the coronavirus penetrated the hospitals one after another. The regional clinical hospital, The Murmansk clinical multidisciplinary center, the children’s regional hospital and the district hospitals have all become covid hotspots. And now they are stopping planned hospitalizations and care for emergency therapeutic and surgical patients  infected with covid. To date, more than 14 thousand people have officially been diagnosed in the region, fourth place in the country in terms of cases per 1000.

Throughout September, the rate of spread of the virus has been steadily increasing. The region is now in the yellow zone and the Rt index on September 20 was 1.1. With such parameters, the lifting of restrictions is not allowed. And since September 18, the self-isolation regime for the elderly has been canceled in the Murmansk region.