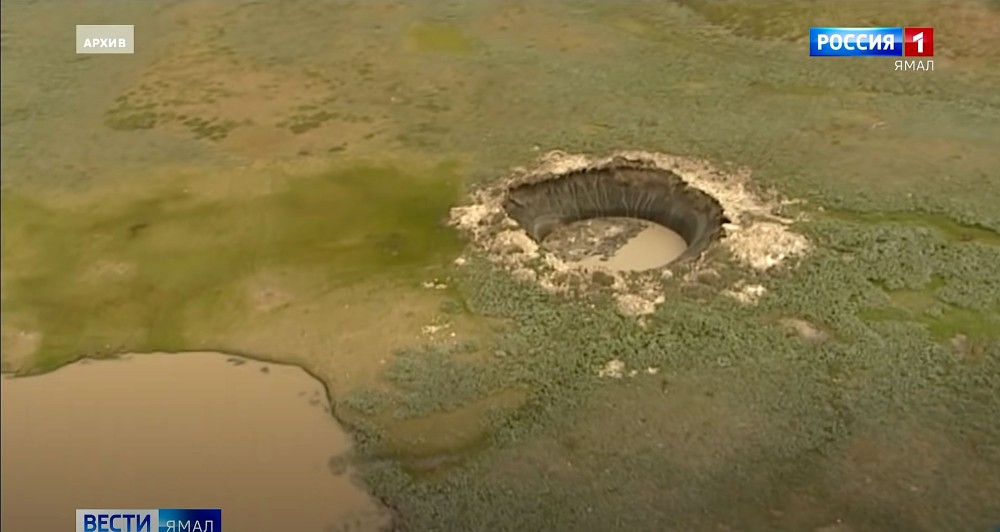 Journalists this summer came across a large crater in the Yamal Peninsula. Photo: Screenshot from Vesti Yamal

The more than 20 meter wide hole is the 17th of its kind discovered in the far northern Yamal region since 2014.
Read in Russian | Читать по-русски
By

It was a team of journalists that in July this year discovered the large hole in the ground as they were flying over the area with helicopter.

The site has since been subject to close studies by researchers, regional television channel Vesti Yamal reports.

The diameter of the hole appears to be about 20 meter, footage from site indicate. The local tundra looks as if hit by a large meteor.

It is the 17th crater of the kind discovered in the Yamal Peninsula. The first discovery was made in 2014. Since then, a number of similar large holes in the ground have been found.

According to researchers, the tundra craters are created as large volumes of gas accumulate under the tundra permafrost and then ultimately explode.

A number of more craters will appear in the near future. Around in the region are numerous small swollen hilltops just waiting to burst.

Researcher Vasily Bogoyavlensky says to Vesti Yamal that the explosions happen when pressure in the ground reaches 12 atmospheres. The powerful explosions can throw soils several hundred meters from the epicenter.

The new crater discovered this summer is unique because of its large proportions and depths, as well as good qualities for study, Bogoyavlensky explains.

It is not known exactly where in the region the latest crater is located, but previous holes of the kind have been found in the vicinity of local oil and gas installations. The crater found in 2014 is situated not far from Bovanenkovo, the large natural gas field that today delivers up to 115 billion cubic meters to European markets.

In 2017, reindeer herders in the area of Seyakh, a village on the eastern coast of the Yamal Peninsula told local authorities that they saw flaring flames and a column of smoke in the distance. A similar crater was subsequently discovered in the area.

The Yamal peninsula har large natural gas resources and is today a top priority region for Russian petroleum companies. Industry representatives now fear that their local infrastructure ultimately will be hit by the tundra explosions.

Economic and environmental damage could be substantial.

Gazprom and Novatek are the biggest companies in the region. Over the next years, they both plan to open several new major hydrocarbon projects.

The Yamal tundra explosions are believed to be spurred by the warmer climate change in the Arctic. As the permafrost melts it releases gas hydrates preserved in the ground.