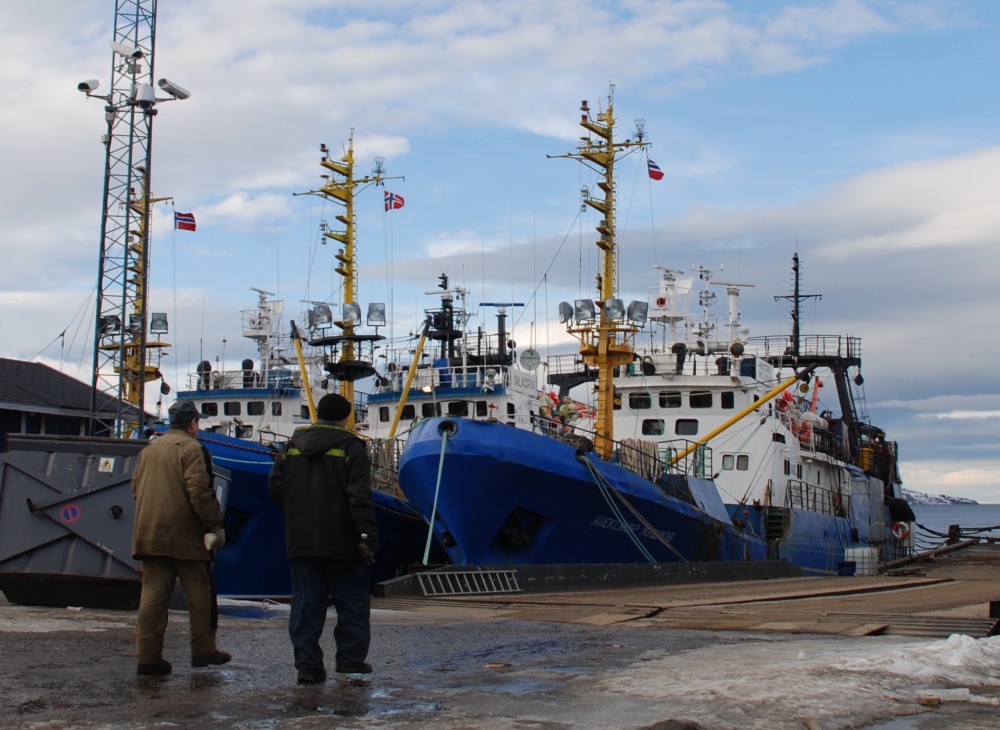 Border guards make it impossible to fish in the Barents Sea, depriving the local population of their main livelihood

On 20 September, applications for licensing and quotas for coastal fishing in the Barents Sea ended. Fishing is highly regulated, quotas are strict and only a certain number of fishing licenses are available.  Usually there is some competition or at least positioning among the major fishing concerns to acquire the available fishing licenses. If until then however, the Arctic Border Department of the FSB does not cease to be interested in fish entrails, it is possible that no one will apply for the licenses and this could mean that in the coming months, Murmansk will be left without fresh fish.

The main reason for this lack of interest in acquiring licensing and quotas are the current requirements of the FSB. What they have done is change the definition of what kind of fishing and fish processing can be done on board coastal fishing vessels. The new definitions make it economically unfeasible for coastal workers to go to sea. Getting caught breaking the new laws comes with a fine of 300% of the cost of the catch.

The problem is in the new definitions and requirements for processed and unprocessed fish that have been set forward by the FSB. These new requirements went into effect at the end of August and state that any on board fish processing, “including gutting and decapitation,” is illegal for coastal fishing operations and violates article 8.17 of the administrative code. Article 8.17 states that there is a difference between catching fish and fish processing. In this case, a fish is classified as one which still has its head and intestines still intact. A fish that has already been processed is now classified as a ready to eat fish product.

The prohibition against fish processing at sea - and this is exactly what this law demands - makes coastal fishing impossible. Coastal expeditions are usually short, only 7 to 10 days. On these short expeditions, they do not freeze whole fish and only process and refrigerate them.  And without freezing, it’s easy to imagine what an unprocessed fish will turn into in a week.

It is a bit unclear what the border guards are demanding from the fisherman: that they wander back and forth between their ships and the shore everyday to do fish processing?

Cod and flounder, economic staples in the fishing industries in Murmansk, are already more expensive than farm products but these new restrictions will make them more expensive than gold for local consumers. And this is impossible because fishing in the North is not the same as in the Mediterranean. The fishing areas can be even hundreds of miles from the ports and they must contend with terrible arctic storms.

One wonders if the person who made up this new rule has ever encountered fishing anywhere but in a resort town. Perhaps they believe that the fishermen head out at night and then return in the morning to sell their fish in the local markets. The climate and the distances covered here simply do not allow such a comfortable situation. Chilled fish must be processed as quickly as possible in order to prevent spoilage. And if this process is no longer allowed at sea, the expedition becomes pointless.

Valentin Balashov, head of the Interregional Association of Coastal Fisheries of the Northern Basin , writes in his blog that he is not surprised at the FSB’s draconian decision. Last year, they banned the production of canning fish packed in cod liver oil at sea and this decision ended the production and sales of these products as well.

For the last year, the captains have been ordered to throw their valuable products overboard rather than risk stiff fines.

And as a result, canned fish marked with the inscription “Prepared at Sea” are less and less common in stores. In the Union of Fisheries of the North, the annual damage from this measure was estimated at 1.2 billion rubles (about 13 million euro). And dozens of cases have been initiated against those who refused to get out of the market.

Despite a heap of complaints and petitions, people continue to work and consequently, people continue to be fined.  The border guards say that they are simply adhering to the new laws for fishing as written three years ago. And the law states that the catch of coastal workers must be shipped live, fresh or chilled. Nothing is said about what to do with cod liver except you cannot bring it in chilled.

The head of the Federal Agency for Fishery, Ilya Shestakov, who was approached by the Murmansk fishermen, attributed the conflict to “human factors”. Shestakov says that it is the overly zealous leadership of the border administration that is to blame for everything. The agency even sent an official letter to the FSB suggesting that they take the fishing agency’s suggestions and position into account in the future. How the vigilant border guards will respond  to this is unknown but so far, nothing has been changed and the fate of working fishermen is still in limbo.

And no one has yet been able to understand exactly why the FSB has taken an interest in fish guts.

The FSB it’s usually most responsible for defending the borders. But for many years now, it has been the main scarecrow for fishermen. The guards either force owners of boats from Teriberka to go to Murmansk for a “check” before each exit to the sea, a trip which is 120 km out of their way, or they accuse local pomors  living on the coast of the internal waters of the White Sea for poaching, or they confiscate catch and in vain search boats for oil products allegedly drained from trawlers. And then maybe they will start to wonder why these fish, caught by coastal workers at sea, can only be sold abroad after processing on shore.

On the other hand, maybe it is understandable. There are not many border violators, so why not catch more fatty fishermen?

The Union of Fishermen of the North is threatening to strike.

“If a reasonable decision is not made by September 20, applications for the coastal quota will not be submitted. The current situation can lead to the ruin of fishing enterprises and lack of fish products for the region,” the fishing organization said in a press release. If a strike occurs, it will be the first time in the history of Murmansk that fishermen refuse to fish.