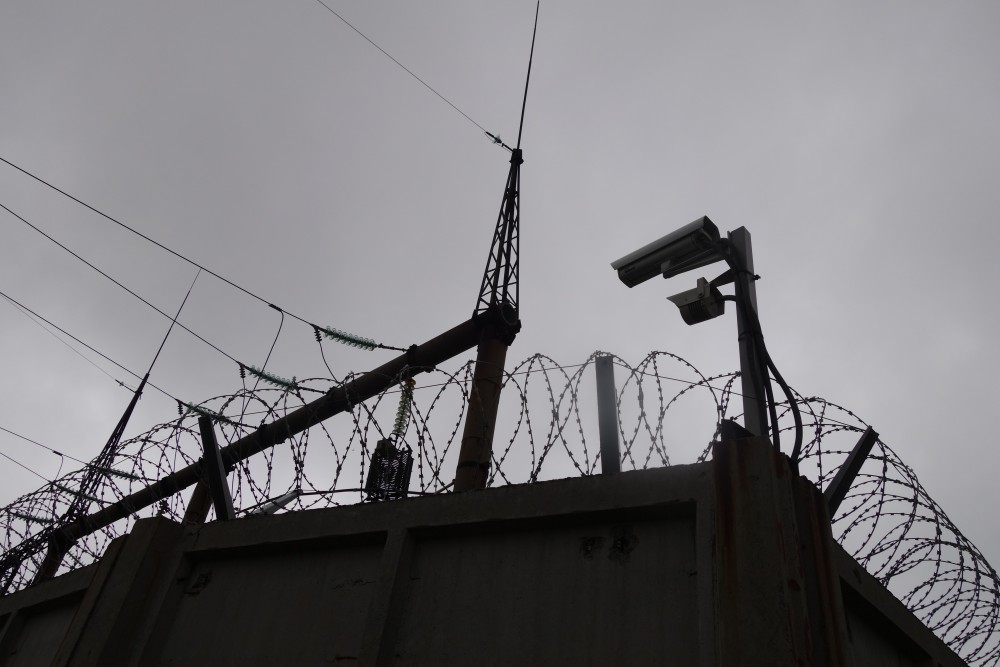 Four years ago, on August 16, a strange memorial plaque was unveiled in the village of Mikun near Syktyvkar. The memorial was placed at the entrance to “Women’s colony No. 31”, in (so called) honor Of the 79th anniversary of the beginning of the construction of the gulag camp. The camp was known as Camp 19, “Vodorazdellag - Mikunskaya”.

“This plaque is placed here as a sign of respect and gratitude to the founders of the colony -  the first builders and workers” is carved on the marble slab:

The lagpunkt, what subcamps at the forced labor gulags were called, here immortalized by grateful descendants, was part of the Ust-Vymsky camp, one of the harshest places in the GULAGs, Glavnoe Upravlenie Lagerei, or Main Directorate of Camps, the system of forced labor camps established during Joseph Stalin’s long reign as dictator of the Soviet Union.

The specialty of this camp during its heyday was as a depository for the huge number of “political” prisoners sent away from Moscow for safekeeping. Up to 55% of the prisoners were convicted under Article 58 dedicated to the suppression of counterrevolutionary activities. The article is inextricably linked with the concept of “enemy of the people”. Article 58 was finally canceled in 1961.

The second distinguishing feature of this “Ustvymlag” was economic success. The camp was considered to be quite profitable and useful in terms of timber harvesting and processing. It is no secret that the GULAG system was not only a system of suppression. It was also an important component of the Soviet economy of the 1930s through the 1950s. In the Komi Republic, almost all large-scale industry stands on the bones of forced labor prisoners.

According to the historian of the GULAG, Mikhail Rogachev, until 1960, more than a million people passed through the gates of what was not even the largest camp in the Komi Vorkutlags.

“Even after 100 years, our society has not been able to invent anything better and the well cultivated nostalgia for Soviet aesthetics suggests that hard labor might return to our reality. As long as society does not suffer a moral imperative, notions of good and evil, which are not so radically at odds with those common to all mankind, we will have to return to this circle again and again.”

But now, according to a fresh report from the TASS News agency, the Komi government, the Federal Penitentiary Service of Russia and the Rustitan group of companies have entered into an agreement for the construction of a mining and metallurgical complex and the accompanying infrastructure for a national mining compound to be created in Komi on the territory of the Pizhemsky titanium deposit, the largest such deposit in the world.

That the Federal Penitentiary Service is a partner in this means that the large prison population of the Komi Republic will be thrown into the construction of a mining and processing plant in the Ust-Tsilemsky region.

Alexander Kalashnikov, the director of the FSIN said that this contract would be a blessing for the prisoners. “It will help our convicts get professional skills while they are here. And then, they can stay here and work in their new profession after their release. This is a means of supplying new jobs for them so they can start families and fully return to normal life. “

This idea by the way is nothing new. Former prisoners of the GULAG are still alive in Vorkuta and the surrounding area. Those who did not die in the construction of the coal mines after serving one or more terms, often remained there after the end of their sentences. It is well known that  waves of criminal sentencing in those years in the USSR clearly correlated with the needs of the “national economy”.

It is also well known that secret directives ordering prisoners to remain in their places as civilians after their sentences were served were issued twice. People were not allowed to leave or change jobs for specified periods of time after their release. And many did not leave even after their “rehabilitation”. Those 15-25 years spent repaying their debt to society took up the biggest part of their lives. And after, there was simply nowhere else to go.

One of these former prisoners from Crimea, Anna Krikun, confidently explained to me why she had remained there in the village of Vorgashor near Vorkutafor her whole life.

“Why should I have to leave here? The best theaters in the country turned out to be here.”

Currently there are about 6,500 people in Federal Penitentiary Service institutions in Komi, this according to department statistics. And now, the Rustitan group sees them as valuable labor.

Objectively speaking however, there is some nuance here. Unemployment is growing at a hellish pace in the Komi Republic. It has doubled in the last 12 months. At the beginning of June, 16,475 people were registered as unemployed in the republic. But yet, they do not have jobs for them at the construction site of the century. Why? Though it is doubtful that they are better qualified, a prisoner at the construction site is three times as valuable. You can pay them a negligible wage and no one will check, working conditions are on the conscience of the employer and letting prisoners do the work means the construction site will remain as hidden as possible from prying eyes that might be a problem for the mining operation.

And as expected, the construction of a giant mining and processing plant in the Ust-Tsilemsky district has already attracted a lot of attention from ecologists and public figures.

Alexander Chuprov, a member of the Committee Save Pechora, an environmental organization, notes that the deposit is wedged in at an angle on the Pizhemsky reserve that stretches along the basin of the Pizhma river. The Red Book, the official guide to local flora and fauna, says that the river is rich in fish. The planned titanium dioxide production, which is scheduled to start next year, could kill everything in the river and the reserve.

“The damage will be colossal,” says Chuprov, “Highly toxic waste will most likely end up in the Tansy River, which flows into the Pechora. The territory of the field is right next to the reserve. If you look at the map, you get the feeling that a piece of the reserve is simply cut out. And the river flows into this field. The mining will be carried out in an open pit. They are going to build a quarry. But where is all of the toxic water supposed to go?”

Official reports indicate that a full exploration of the deposit has already been carried out and over 40 minerals have been discovered. So the booty issue is settled despite local residents never being given the opportunity for any public hearings on this matter.

The talk about the development of this has been going on for a long time. Up until now, the company has had problems with financing. But since the new laws have been passed in favor of entrepreneurship in the Arctic zone, the project has had renewed interest. Now perhaps they will have the opportunity to use public funds for the project, pay minimum taxes and generally make minimum contributions to the budget. These new opportunities make  production much more profitable. And since prison labor has been added, if there is no information leakage, nothing can be checked or controlled.

According to Chuprov, no work is currently underway at the site but the territory is guarded. The local residents however have vast experience fighting various industrial companies, from Lukoil to Shies’ investors. Most probably, it will not be easy for the Rustitan company to develop the field on the Pizhma.

Meanwhile, another scandal is flaring up in Komi. Vladimir Uyba, the acting head of the republic has announced that there will be some gold mining on the territory of the Yugyd Va national park as well.  The development company in this deal has registered in the town of Inta, which, like the Ust-Tsilemsky district, is part of Russia’s “Arctic Zone”. The benefits provided to “Arctic” enterprises are really great, including deductions in the mineral extraction tax based on the volume of investment made in infrastructure. They are also promising new separating and processing facilities. The laws also provide for the establishment of a zero VAT rate for the transportation of goods, partial reimbursement of insurance premiums, subsidies for loans and the right to undergo an environmental examination simultaneously with the main state examination of the project.

Unfortunately, the preferences for big business in the polar regions make it possible to expect an increase in industrial impact on the Arctic. If the rights to use prisoners are added to these benefits, industrial giants will receive unprecedented opportunities previously available only to the state.

Indeed, if using slave labor from a GULAG is allowed by the state, the law for creating additional settlement colonies connected to correctional centers at large enterprises and construction sites, which has been the case since January 1, makes it possible to send prisoners to work in the interests of private business. An organization needs only to sign an agreement with a correctional institution and their labor problem is solved.

But this is simply another nuance. Since our constitution has been nullified, anything it seems is possible.