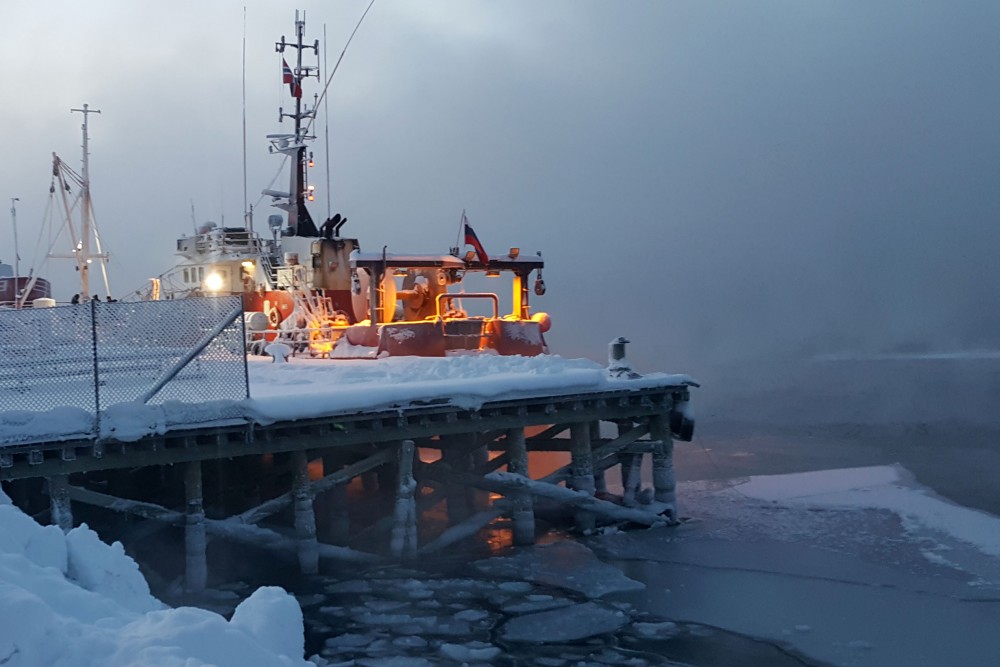 Onega was last time at port in Kirkenes on December 14. Photo: Thomas Nilsen

The Russian fishing boat «Onega» sank near Novaya Zemlya. Two of the crew of 19 have been rescued, news agencies report citing the emergency ministry.
Read in Russian | Читать по-русски
By

“At 07.30, information was received about the sinking of the ship Onega (MK 0331) in the Barents Sea near Novaya Zemlya, Arkhangelsk region. The ship had a crew of 19 people. Two were rescued, searches are being carried out by five other fishing vessels in the area,” the Ministry of Emergency Situations (EMERCOM) said in the statement quoted by the Russian news agency TASS.

Onega had Murmansk as homeport and 16 of the crew members came from the city.

The search- and rescue operation is headed by Murmansk Marine Rescue Coordination Center with assistance from Russia’s Northern Fleet. Air temperature in the area is around -20°C with strong wind. Waves are up to four meters, according to EMERCOM’s Murmansk department.

There are polar night in the Barents Sea this time of the year, making search operations difficult.

The emergency ministry says icing is believed to have caused the sinking. Icing on ships can happen when temperatures are below freezing in combination with strong wind resulting in spray blown off the sea freezing in contact with the ship. Such ice makes the ship heavy and can be a serious hazard.

In combination with strong wind, big waves, and heavy fishing gear, icing seriously increases the chances of a ship capsizing.

The two survivors were rescued by another fishing vessel in the area, Interfax reports. The two were in wetsuits.

Quoting a source in the area, the news agency says the catastrophe happened quickly during work with lifting the fishing net with the catch, and the “crew did not manage to use the rescue equipment.”

All crew members are reported to be Russian citizens.

Onega sailed out to the Barents Sea from the port of Kirkenes (Norway) on December 14, according to MarineTraffic.com.

The eastern part of the Barents Sea is too far away from possible helicopter search flights from Murmansk. Possible helicopters from Naryan-Mar in the Nenets Autonomous Okrug would need re-fueling either at the military Rogachevo airport on the southern island of Novaya Zemlya, or at the island of Kolguyev.

The military Northern Fleet has one Il-38 maritime surveillance aircraft participating in the search.

Murmansk Governor Andrey Chibis says in a statement posted on Instagram he has received the terrible news from the Barents Sea. An operational headquarters for the search operation is created and a hotline for relatives is established.

The sinking of Onega is likely the worst civilian ship disaster in the Barents Sea in modern times. There is little hope to find any of the missing crew members alive in the freezing cold water.

Other major accidents in the Barents Sea involve military submarines. In August 2000, all 118 onboard the submarine Kursk died after the torpedos exploded and in July 2019, the 14 crew members on the special mission submarine Losharik died in a fire on board.

Onega was originally built in Norway in 1979 and sailed under the name Remifisk until 2003.