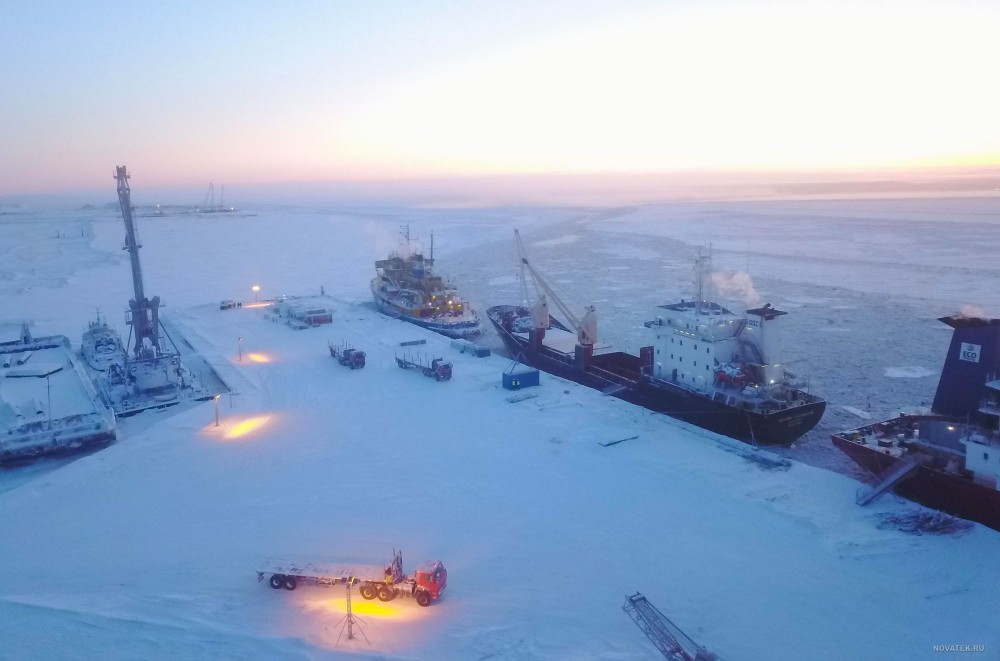 The Utrenneye seaport is under development. Photo: Novatek

Developers assure that the new Arctic seaport of Utrenneye will be ready for operations in 2022.
Read in Russian | Читать по-русски
By

It is mid-December and shipping along the Russian Arctic coast has almost come to a full halt. With one exception. In the Gulf of Ob, ship traffic continues at a high pace.

Among the key ship destinations in the area is Novatek’s Utrenneye terminal, the major piece of infrastructure currently under construction on the eastern shore of the shallow bay.

In the second week of December, there were 12 ships in the area of Utrenneye, eight of them cargo ships.

Ice conditions are getting increasingly difficult, and two icebreakers, among them the nuclear-powered Yamal, are keeping the waters open. According to ice maps from the Russian Arctic and Antarctic Research Institute, the ice sheet in parts of the Ob Bay is now between 30-100 cm thick.

The Utrenneye terminal will serve Arctic LNG 2, the project that now gets top priority both by Russian government officials and natural gas company Novatek.

A key share of the new infrastructure is financed by federal funds, and it is state nuclear power company Rosatom that has the top responsibility. In a lengthy interview with newspaper Kommersant, leader of Rosatom’s Northern Sea Route Directorate Vyacheslav Ruksha assures that the Utrenneye terminal will be completed in 2022.

In the course of summer and fall this year, more than 32 million tons of sea bottom was removed as part of the opening of a bigger shipping channel up the shallow bay.

According to Rukhsha, construction works are proceeding ahead of schedules and there will ultimately be now problems connected with the towing of Novatek’s production platforms for the Arctic LNG 2.

Ruksha also explains that there currently is no financial troubles connected with the building of the ship channel. Previously, Rosatom reportedly lacked more than 100 billion rubles for the works.

“This issue has been resolved,” the Rosatom representative underlines. “It is like always the great Ministry of Finance that has provided the funds,” he says to Kommersant.

When ready, presumably in 2024, the Arctic LNG 2 will produce up to 19,8 million tons of LNG per year. According to Novatek leader Leonid Mikhelson, up to 80 percent of that natural gas will be sent eastwards on the Northern Sea Route to Asian buyers.

“We are planning for the introduction of new LK-60 icebreakers already in the course of this decade, which will open up for year-round shipments on all parts of the Northern Sea Route,” he told TASS