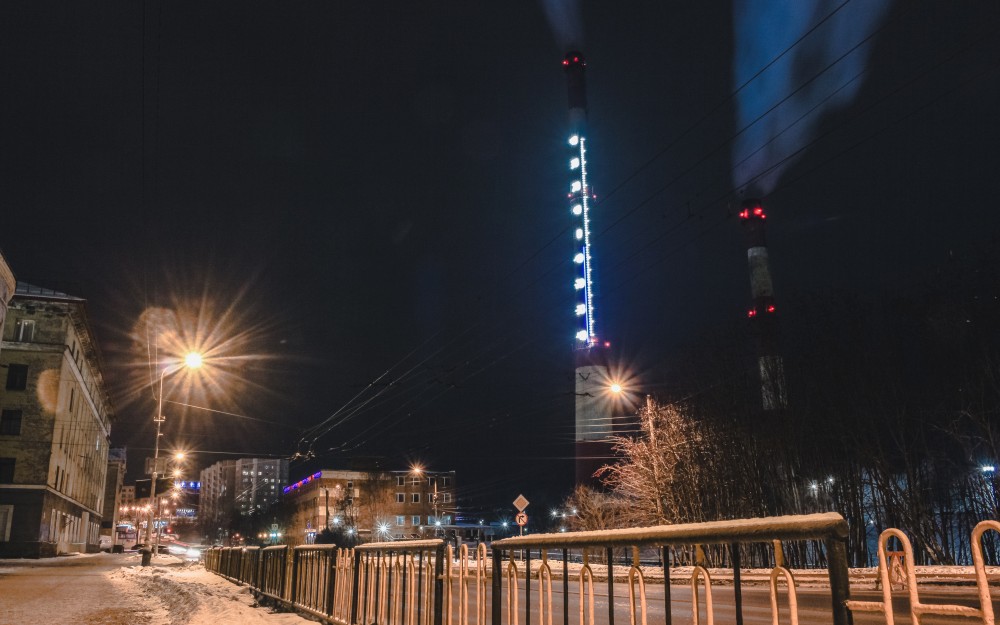 The thermometer is attached to one of the chimneys at the heat-power plant on Schmidt Street in the city center. Photo: Murmansk TEZ

It is freezing cold this January in Russia’s Arctic capital, something the inhabitants from now on clearly can see from the 65-meter tall thermometer attached to a chimney at the centralized heat-power plant.
Read in Russian | Читать по-русски
By

They might have a challenge now, the owners of what is marketed as the “world’s tallest thermometer” in Baker, California. According to their site worldstallestthermometer.com, the monolith not far from the Death Valley is 134 feet, equal to 41 meters.

The thermometer in Murmansk, lighted for the first time this week, is 65 meters tall, mounted to a chimney 150 meters high.

Unlike the thermometer in Baker, one of the hottest places on the planet, the one in Murmansk is more likely to display the other end of the temperature scale, with below -20 °C this weekend.

Current temperature can be seen from a distance of 3 kilometers, according to the operator of the heat-power plant, Murmansk TEZ.

The plant is one of three in Murmansk for municipal heating and hot water supply. Boilers run on mazut, a heavy low-quality fuel oil releasing a record-high amount of carbon dioxide, sulfur dioxide and nitrogen smelling bad all over Murmansk on days with cold weather and little wind.

Infamous for severe air-pollution, the heat-power plants have been suggested to be replaced by gas-fueled power plants, but so far, little progress is seen.

Led-lamps, attached to a control system by the weather agency Roshydromet, display the current temperature and is developed to shine bright in mid-winter polar night as well as during the midnight sun season. The colors changes from red to blue and vice versa depending on the temperature.

In recent years, the climate in the Russian Arctic, like in other circumpolar areas, has been exceptionally warm. As reported by the Barents Observer before Christmas, Arctic Siberia measured a temperature deviation from normal of more than 20 degrees Celsius.

In early December, Russia’s Arctic coast for a long period measured between 10-15 °C above normal, and in November the deviation from normality in the region was set to 12 °C.