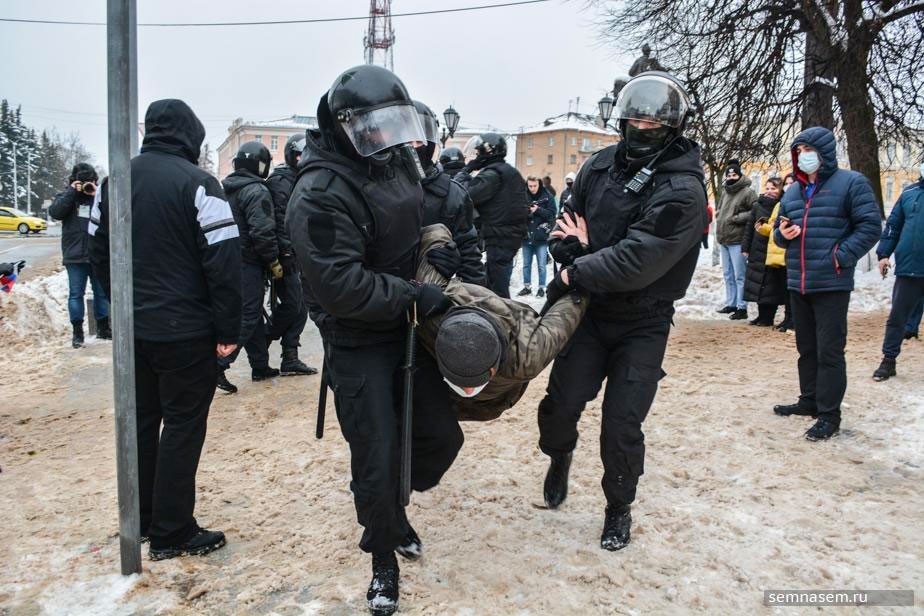 Police detained more than 11,000 protesters on 23rd and 31st of January this year. More than 70 were detained in the north Russian Komi Republic. Photo: Dashun Samarina, 7x7-journal.ru

Supporters of Aleksei Navalny were forcefully dragged into police vans, but leader of the local National Guard argues that his men acted with politeness.
Read in Russian | Читать по-русски
By

An estimated 1,500 people were on the 23rd and 31st of January this year in the streets of Syktyvkar, Komi Republic, to protest against the arrest of opposition leader and anti-corruption activist Aleksei Navalny.

In the course of the two days of rallies, local police from the National Guard (Rosgvardia) detained more than 70 people. Many were forcefully dragged into police vans and several were beaten.

Police intervenes in rally in Syktyvkar on the 31 of January. Video by 7x7-journal

However, local Rosgvardia leader Aleksey Khodorov argues that his troops acted gently with the protesters. In an interview with local newspapers, the chief law enforcer underlined that the protests proceeded calmly and that the protesters behaved in an “educated way,” 7x7-journal reports.

“The officers worked to halt the public disorder, but acted like polite people and in a friendly manner requested the protesters to enter the police vans,” he said in the interview.

At the same time, Khodorov stressed that illegal rallies must be seen as serious violations of public order and that the law enforcement authorities are entitled to use “any mean of force.”

Support rallies of Aleksei Navalny were on the 23rd and 31st of January held across the country, and more than 11,000 people were detained, most of them in Moscow. The Republic of Komi was the north Russian region that mobilized most protesters.

Not all unsanctioned rallies are met with police crackdown