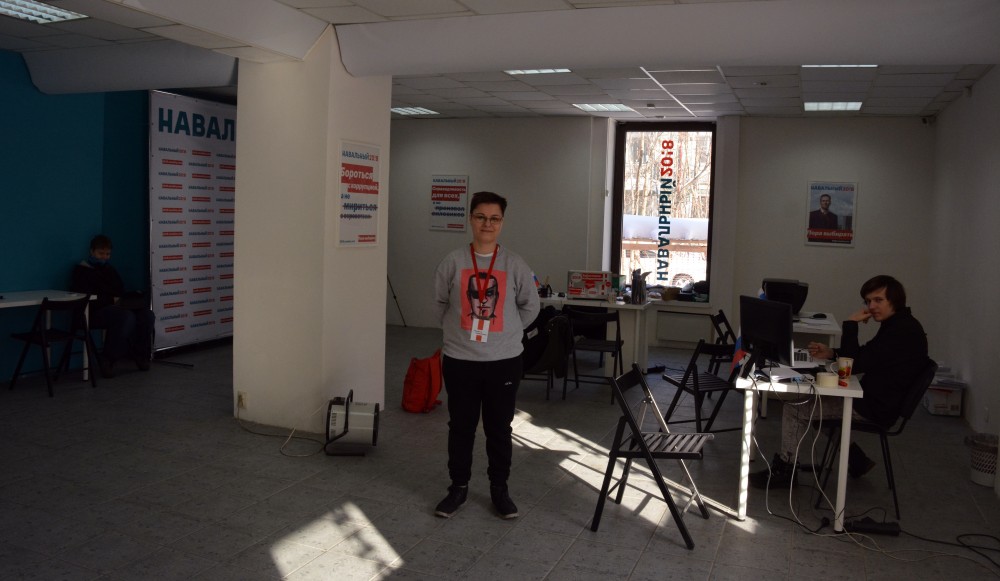 Violetta Grudina in the Navalny office in Murmansk in 2018. Photo: Atle Staalesen

Violetta Grudina and her organization in Murmansk is now officially declared "extremist" after Moscow judges in a show case ruled against Navalny's Anti-Corruption Foundation.
Read in Russian | Читать по-русски
By

In a hasty court case, judges in the Moscow City Court on Wednesday ruled against the opposition movement that over the last years has become a growing threat to the authoritarian rulers in the Kremlin.

The Anti-Corruption Foundation and all of Navalny’s regional organisations are now officially “extremist”, and their activities banned on Russian soil.

Anyone who continues to work for the organisations faces several years behind bars. That includes activities such as distribution of information, financial operations, participation in elections and organisation of events, legal team Komanda 29 informs.

But the threats from the authorities appear not to stop Violetta Grudina, the woman who relentlessly has headed the local Navalny office in Murmansk since it opened in July 2017. Grudina intends to continue to work against the rulers in her far northern region.

“I want my children, my relatives to have a better life. With good salaries and pensions, free and decent,” she says in a statement.

“I will continue to work and no court decision will stop me!” she underlines.

Grudina is now running for a seat in the Murmansk City Council. Her election campaign has met ardent opposition from anti-democratic forces in the region. The politician has repeatedly been detained by police and in late April someone broke into her office and painted swastikas on the walls. The same people had also poured some kind of foam in front of her office door. Her postbox had been stuffed with leaflets that warn against her candidacy.

Ahead of its ban, Navalny’s Anti-Corruption Foundation warned that “the darkest of times” is about to descend on Russia and that the extremism charges “will open the way for hundreds of criminal cases.”

“All or our colleagues will be under pressure […] and in the worst case, even volunteers, the supporters and the ones who hand out leaflets and participate in our activities will be charged,” the organization said.

“The darkest of times for free thinking people and civil society in Russia is coming. Actually, the Kremlin has just demanded that everyone that does not consent are to be declared extremist,” the statement reads.

The Kremlin persecution of Aleksei Navalny and his team has encountered condemnation from the international community.  In a statement, the Norwegian Foreign Ministry on Thursday said the verdict is “an attack on every Russian citizens’ democratic rights.”

We condemn the Moscow court decision to outlaw #Navalny’s political organizations by deeming them extremist. It’s an attack on every Russian citizens’ democratic rights. The Russian state must allow & promote conditions for real political competition and dissent. #EriksenSoreide pic.twitter.com/05gTWdfYBC

The team of lawyers that defend Navalny and the Anti-Corruption Foundation now has a month to decide whether they will file an appeal.

The lawyers are themselves under mounting pressure from the Kremlin, and their leader Ivan Pavlov was in late April himself detained by police and charged with violations of the Russian criminal code.

This week’s court hearing took place in a closed regime and without the key defendant Aleksei Navalny. As increasingly normal procedure in Russian show cases, a key part of the case documents had been coded “classified” by the prosecutors. All requests from the defense were rejected and no plausible proof of guilt was presented, Team29 informs.

The group of independent lawyers on their website presents a timeline for the whole case (in Russian).