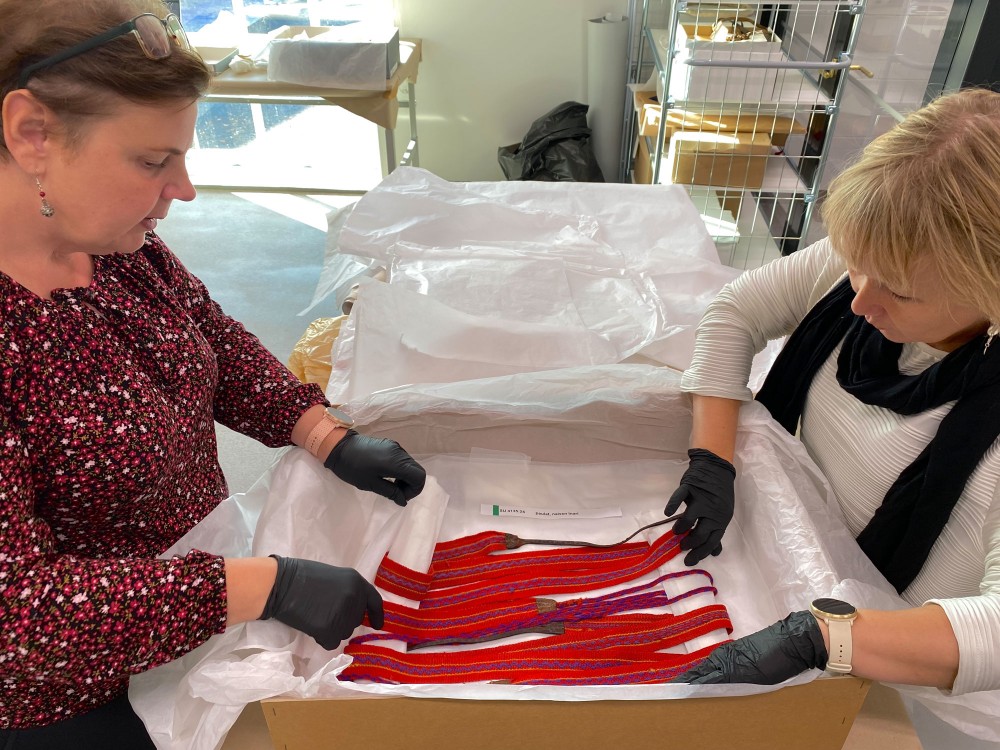 The artifacts range from utility articles such as gloves and knives to bigger subjects such as whole buildings and boats.

For the team at Siida Museum, it is like christmas. Boxes and boxes full of precious items are waiting to be unraveled and examined, and the team does not know what each box contains. “Now the real research begins,” says Eija Ojanlatva, archeologist and Substitute Museum Director at Siida museum. “It was a terrific sight when the trucks arrived, after the first shipment the amount of boxes that we had was incredible,” she continues.

The repatriation has an important meaning for the Sámi communities. The collection has items from all over Sámi area as well as from Petsamo area, collected before relocation on the Skolt Sámi from the area. Over the recent years there has been a lot of discussion over repatriation globally, which in this case means the process of returning something to their place of origin. The items were bought by collectors from Sámi areas and eventually made their way to the National Museum of Finland. The oldest artifacts come from the late 18th century and the newest from the early 20th century. According to archeologist Ojanlatva, there is very little information on some of the items. “We have information on what the item is, estimate on where the item is from, but not more than that. Sometimes there is no information on when it was made or who the owner was,” she says.

Because of this, Siida museum is working closely with the local Sámi communities. The museum is asking for help from the older generation, who might recognise certain items, patterns or designs that belong to a specific area or family. “We are getting the information now from the Sámi communities, which is really valuable to us. I see that our work in communality is only beginning now that we have received these artifacts,” Ojanlatva says.

Previously, if a person wanted to see these items in the National Museum of Finland, they had to travel more than 1000 kilometres, book a time slot to the collection and have a rough idea of what they wanted to see. Ojanlatva hopes that the process will be smoother now. “What is perhaps most important is that the artifacts are managed by a Sámi organisation,” Ojanlatva says. She goes on to explain that former president of the Sámi Parliament of Finland, Tiina Sanila-Aikio, has mentioned that the Siida museum is implementing the cultural autonomy of the Sámi people. They are also the only organisation in Finland who actively captures Sámi culture for the future generations as well - whether that is oral history, material history or archival information.

The repatriation happened at an excellent time, since the museum is undergoing big renovations - the museum is renewing its permanent exhibition and some new parts are being built which will be able to host the new artifacts. Next, the team at Siida museum must determine which items will go to the permanent collection; “We have certain items that we know we want there, but we cannot really tell before we estimate the condition of the items. Can we use them as they are or do they need to be conserved?” Ojanlatva says.

The museum renovations are underway and Siida museum will open officially on 1st of April 2022.