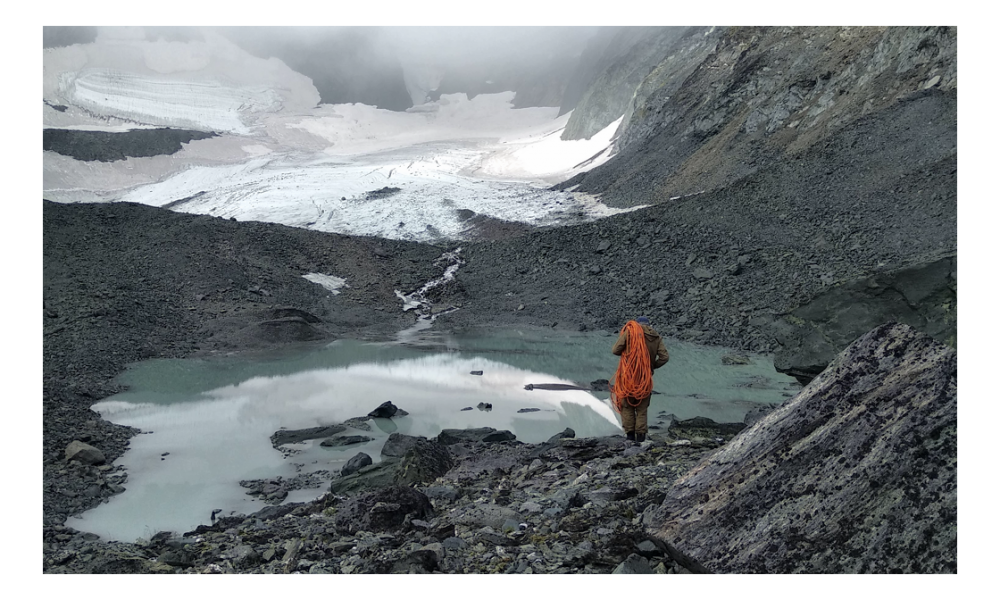 This summer, all of the snow-cover at the Igan glacier in northernmost Urals melted.

Snow is melting at a faster pace than ever in the Ural region and revealing the Igan glacier’s true area.
Read in Russian | Читать по-русски
By

Whereas previously thick layers of snow coated and concealed the glacier, the snow cover has now disappeared, thereby causing a maximum amount of exposure of the glacier despite relatively cool summer conditions. It was this unique circumstance of an “exposed” glacier that enabled the members of a polar expedition in the Urals to distinguish and demarcate the glacier’s boundaries which were previously unmarked.

Mikhail Ivanov, a senior researcher at Moscow State University, explained the unique glaciological occurrence: “Solid precipitation is the main “booster” for glaciers. The snow that has fallen over time becomes compacted and turns into firn, which is then transformed into ice. This summer, the IGAN glacier turned out to be almost 90 percent free of snow.” It is the portal of the Okrug’s administration that informs about the exposed glacier.

Sadly, the amount of snow that has melted on the Igan glacier is completely unprecedented and thus a record low.

Glaciers are crucial indicators of climate change and are often analyzed by glaciologists to map climate trends.

Before 1981, year-round research was carried out on the Igan glacier. However, between 1981 and 2017 the amount of research done on the glacier and its trends decreased. Now, research surrounding the Igan glacier has resumed, as seen with the Polar Ural expedition, which was one of a series of expeditions done in the region since 2017.

The expedition which enabled the new demarcations of the Igan glacier was part a project created by the Russian Center for Arctic Development called the “Study of the transformation of the cryolithozone of the Yamal-Nenets Autonomous Okrug under the influence of natural and anthropogenic factors.” Participants of the expedition were scientists from the Scientific Center for the Study of the Arctic and Moscow State University.

During the expedition, one of the things the scientists continuously monitored was the central part of the moraine, which is composed of the rocks and sediment carried down by the glacier due to its movements. The data the scientists obtained at their expeditions is being sent to the World Glacier Monitoring Service, thereby making it more feasible to predict potential natural hazards as a consequence of global warming.

Alexander Shein, a leading researcher in the cryosphere fields of the Scientific Center for Arctic Studies stated, “Throughout the history of the Earth, ice ages were replaced by warmer epochs. And now, such an interglacial time indicated that the planet’s surface is warming up. Strong snowmelt exposed new parts of the glacier. We have carried out a high-precision geodetic survey of its surface, which will allow us to trace the dynamics of changes in recent years”.

The research obtained through the newest Igan glacier expedition might serve as an important part of future solutions to the vast environmental problems humanity is facing.