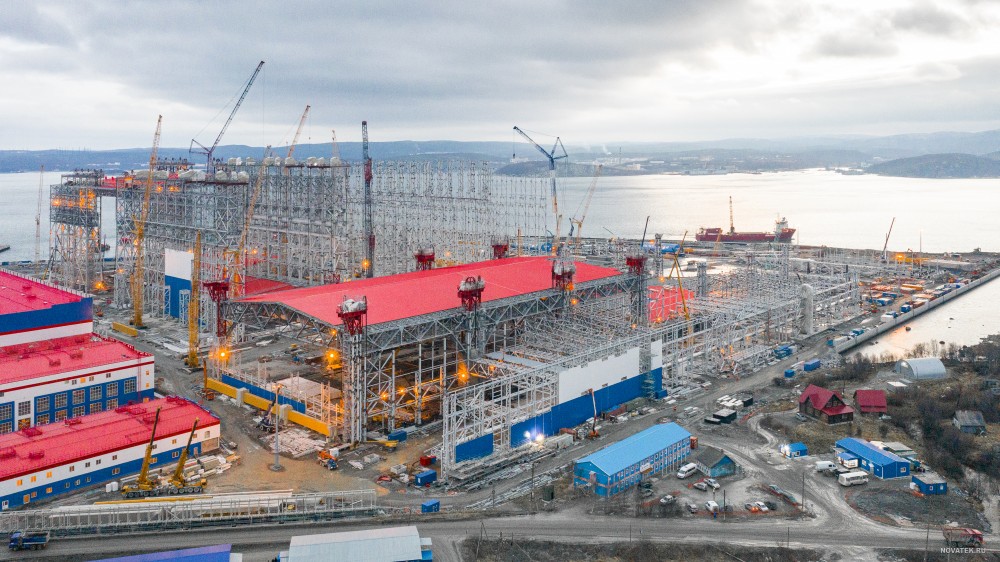 Thousands of jobs will vanish if projects like the Belokamenka Yard outside Murmansk come to halt.
Read in Russian | Читать по-русски
By

Several of Russia’s biggest construction projects in the Arctic are kneeling as sanctions deprive developers of western technology and investments.

Among the projects that is likely to suffer is Novatek’s LNG Construction Center in Belokamenka outside Murmansk. The Center is building so-called gravity-based structures (GBS) and assembles topside modules for the Arctic LNG 2 project.

According to Novatek, it is the world’s first facility for “mass production” of natural gas liquefaction trains on gravity-based structures. Three structures of the kind are under construction, each with a production capacity of 6,6 million tons of LNG per year.

However, Novatek might ultimately be able to complete only one of the projected three structures. According to Upstream, the Chinese yards that manufactures the topside modules have decided to halt cooperation with the Arctic LNG 2.

The Chinese withdrawal from the project comes after similar decisions by European companies like Linde and Siemens.

That could soon lead to a standstill at the huge and brand new plant. Reportedly, Novatek already in late April halted construction at project train number 3 while number 2 will be halted in late May.

Local authorities in Murmansk are now increasingly concerned by developments. There are about 20,000 workers at  Belokamenka yard and many of them are from the region. Although the by far biggest share of employees are guest workers and commuters from other regions and countries, first of Central Asian countries and Turkey.

A full or partly standstill could lead to a significant drop in regional tax revenues and the local real estate marked could get a dip.

A local real estate agent says to Severpost that the house rental marked in Murmansk will quickly be affected by a reduced activity level at Belokamenka.

Novatek might ultimately now be left with only the first train of the Arctic LNG 2. All the 14 modules needed for the train have been shipped from China to Belokamenka, and it is now believed to be about 85 percent completed. When ready, the structure will be towed through the Barents Sea, Kara Sea and up the Gulf of Ob to the production site in the Gydan Peninsula.

Production of LNG was originally due to start in 2023. But time schedules are now in flux.

Company CEO Leonid Mikhelson himself admits that operations are getting “complicated”.

A similarly difficult situation is likely to embrace several more of the company’s projects.

Behind the troubles are the sanction imposed on Russia following the bloody war against Ukraine.

The EU’s recently imposed 5th sanctions package includes a ban on exports to Russia of key industry components. Foreign companies are now leaving Russia en masse. Also Technip, the key partner in the Arctic LNG 2, is now under growing pressure to reduce its presence. However, for now, the French engineering and construction company has decided to remain part of the project, Upstream reports.

The French engineering and construction company in 2019 signed a $7.6 billion contract with Novatek, that included the development of all the three LNG trains