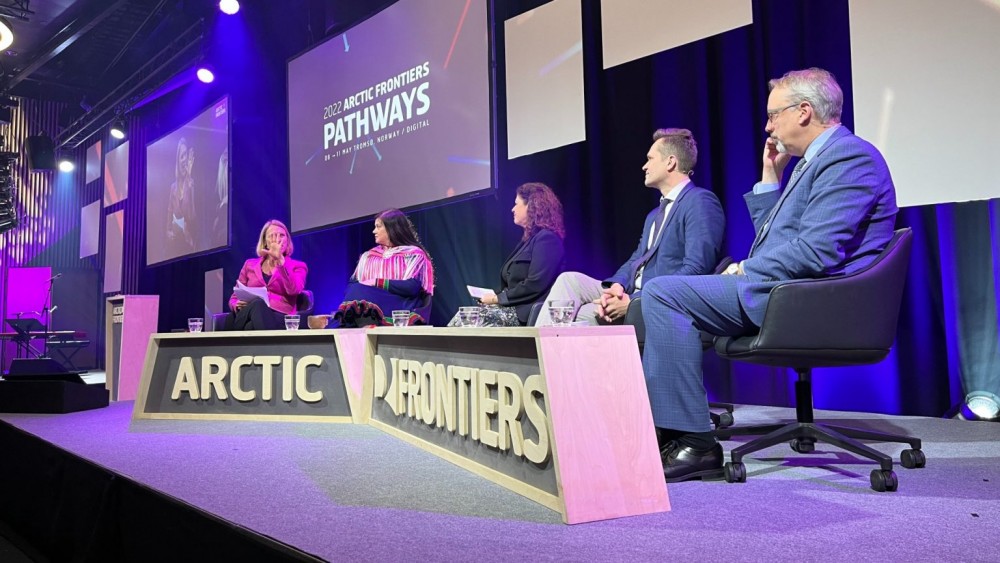 Everyone agrees Arctic cooperation needs to continue in some form, the Arctic Frontiers conference heard Monday, but with the Russian invasion of Ukraine, the question now is, how? From left to right: Norway’s Foreign Minister Anniken Huitfeldt; Saami Council President Christina Henriksen; moderator Anniken Fjelberg; Mika Aaltola, director at the Finnish Institute of international Affairs; and James DeHart, coordinator for the Arctic Region Office at the U.S. Department of State. Photo: Eilis Quinn/Eye on the Arctic

Two months after Russia’s invasion of Ukraine upended cooperation at the Arctic Council, which Russia currently chairs, the seven other member states are working on a plan forward, circumpolar officials told an international conference on Monday.
Read in Russian | Читать по-русски

“We have a responsibility as Arctic states to continue this important work,” James DeHart, coordinator for the Arctic Region Office at the U.S. Department of State told the Arctic Frontiers audience of dignitaries, government ministers, business people, researchers and academics.

“Our senior Arctic officials are working very hard on this and how to do that without damaging the Council in the long term. Understanding that the greatest value of the Council is with the eight Arctic states and with all Peoples of the region in the long term, we can’t do that now.”

We need to find a way to proceed and we need to do that with some urgency.” — James DeHart, coordinator for the Arctic Region Office at the U.S. Department of State

DeHart said structural changes to the Arctic Council were not on the table, but did not elaborate further on possible ways forward.

“We’re quite content with the structure as it is,” he said. “We’re not interested in changing the membership, but we are interested in doing the work.”

The Council was founded in 1996 for the northern states to work together on environmental protection and sustainable development.

Canada, Denmark, Finland, Iceland, Norway, Sweden and the United States announced they were pausing their participation in the Arctic Council’s work in March amidst Russia’s invasion of Ukraine.

Russia currently holds the forum’s two-year rotating chairmanship and has previously said it will continue with its chairmanship program as planned.

Norway takes over the Arctic Council chairmanship next year. Foreign Minister Anniken Huitfeldt said she believes in the endurance of the Council and that Norway is preparing its chairmanship priorities as planned.

“The challenges in the Arctic will not disappear, they must also be dealt with in the future,” she said. “That requires multilateral cooperation.”

Norway will chair the Arctic council from May next year, all the preparations are underway. It will be very different chairmanship from what we anticipated.” – Norwegian Foreign Minister Anniken Huitfeldt

DeHart says despite the rupture with Russia, the seven western circumpolar countries remain committed to their ultimate goals for the region.

“These borders were not our idea”

Christina Henriksen, president of the Saami Council, the organization that represents the Indigenous Saami in Norway, Sweden, Finland and Russia, the traditional Saami homeland known as Sapmi, disagrees.

“For us, nothing is the same,” Henriksen said.

“[Saami] in four countries have been forced to also put a hold on our formal cooperation.” – Christina Henriksen, president of the Saami Council

“We were supposed to celebrate 30 years of cooperation at our conference this August and it won’t happen. We’re staying in touch informally with our friends our families and our partners because that is a very important dimension. These borders [dividing Sapmi] were not our idea.”

Henriksen said cooperation with Arctic Indigenous Peoples in Russia is also at stake.

Future up to Russia

“We must get back to work,” Balton said. “But we cannot pretend that the events in Ukraine haven’t happened and aren’t continuing to happen. They have shocked our conscience.”

We cannot move forward in the Arctic in any way that legitimizes what is happening in Ukraine and what Russia is doing there.” – David Balton, executive director for the White House Arctic Executive Steering Committee

“The Arctic Council and [other institutions that have paused activities] cannot be all they are without Russian participation. The hope is that somehow we can find our way back. But that’s largely up to Russia, it’s not up to us.”

The Arctic Frontiers conference runs until May 11.